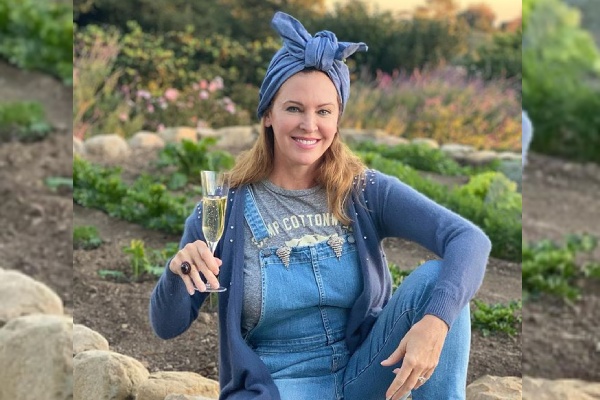 Leslie Zemeckis, mostly known as the wife of director Robert Zemeckis, is an actress and writer. Image Source: Instagram/lesliezemeckis.

Leslie Zemeckis is an American actress, writer, and producer who has shared the screen with great actors like Tom Hanks, Jim Carrey, and Steve Carell. She has worked in movies like Beowulf (2007), A Christmas Carol (2009), etc. And in addition to that, Leslie is not just any author but a best-selling author.

Even after being one of the best in her field, she has not been able to get the recognition she deserves. Despite being an excellent writer, she is mostly recognized as the wife of the famous director and producer Robert Zemeckis. Her life and career achievements have always been overshadowed by her husband’s success, but it’s time to know about her and give her the identity she seeks and deserves. So, here are 5 interesting facts about Leslie Zemeckis, including her net worth, husband, and children.

Leslie Zemeckis Is Married To The Famous Filmmaker Robert Zemeckis

Leslie Zemeckis’s Husband is Robert Lee Zemerick, an American film producer, director, and screenwriter. He is most famous for his incredible and unique takes on visual effects. He got his big break after directing the movie Romancing the Stone, Back to the Future film trilogy, and Who Framed Roger Rabbit. Robert is an Academy Award-winning director and he received the award for demonstrating his amazing skills in visual effects of the movie Forrest Gump, which starred the one and only Tom Hanks.

This much background is probably enough to know about Leslie’s husband. Now let’s rewind. Leslie Zemeckis got married to Robert Zemeckis on December 4, 2001. This makes them happily married for 19 years, as of now.

Leslie Zemeckis Is A Mother Of Three

Leslie’s public persona is that of a strong, bold artist, but in private life, she’s very affectionate and loving. Leslie Zemeckis and Robert Zemeckis have been blessed with three children- two sons and a daughter. All three of their children, sons Rhys Zemeckis and Zane Zemeckis, and daughter Zsa Zsa Rose Zemeckis tend to remain off the social media and like to keep their lives private. They do not accompany their parents to any public event. Although they don’t have any social media handles, we can speculate that they live a pretty luxurious life with a father who has a net worth of $60 million.

Leslie also has a stepson named Alexander Zemeckis from her husband’s previous marriage with actress Mary Ellen Trainor. Alexander has been trying to enter the world of Hollywood, but he is yet to receive his first big break.

Leslie Zemeckis’ Net Worth As A Best-selling Author

Most people don’t know much about Leslie Zemeckis, and neither do they know about her writing skill, which is top-notch. She is not the author of only one bestseller but three. You might be curious to know about the name of those best-selling books, so here they are: Behind the Burly Q: The Story of Burlesque in America, The Life of Striptease Lili St. Cyr, and Feuding Fan Dancers: Faith Bacon, Sally Rand, and the Golden Age of the Showgirl. This is probably the most amazing fact about Robert Zemeckis’ wife, Leslie Zemeckis.

Not only that, but she is also one of the contributors of Medium, Huffington Post, and Talkhouse. She has shown her remarkable aspiration to specialize in women in American pop culture through her articles on the aforementioned platforms, including Stork Magazine and W Magazine. She has also given presentations in many universities and panel discussions.

Leslie currently resides in Santa Barbara, California, with her husband and children. The couple also has a lavish vacation home in Italy. Her Instagram posts show that she is living a luxurious life with her famous and rich husband. She often flaunts her luxurious lifestyle on Instagram.