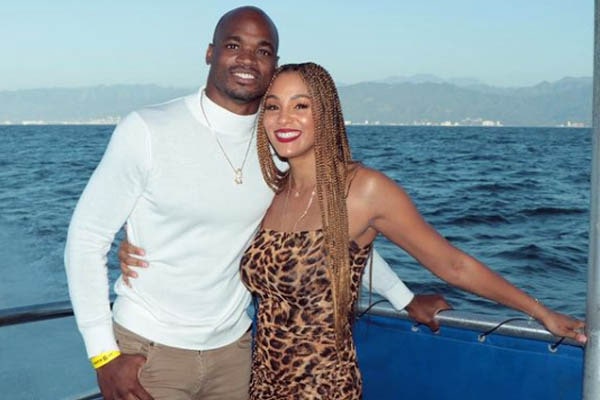 Adrian Peterson is one of the prominent American football running backs who is currently not under contract to any specific team. The 2004 unanimous All-American, Peterson is the first freshman to finish as a runner-up in the Heisman Trophy balloting. Widely considered one of the greatest running backs in football history, Adrian’s last contract was with Detroit Lions. Overall, he appeared in 16 games and began ten games for the Lions in 2020, which he finished with a total of 156 carries for 604 yards and seven rushing touchdowns.

Here’s some more about Peterson’s better half, Ashley Brown, including what she does, their kids together, and their relationship.

Married Adrian Peterson In The Summer Of 2014

Ashley Brown exchanged the wedding vows with her long-time love, Adrian Peterson, over the summer without letting the media know about it. The couple’s marriage was entirely a secret till they showed up with rings on their fingers some months later at the Starkey Hearing Foundation gala in Minnesota. Only after that, a spokesperson to Peterson confirmed that the two former college sweethearts tied the marital knot secretly.

Furthermore, when a media reporter asked Adrian Peterson’s spouse, Ashley, for her last name in the gala, she immediately replied, ‘Peterson.’ Moreover, she told the photographers to mention her as Ashley Peterson in her photos.

Both Peterson and his current beau, Ashley, attended the University of Oklahoma, where their romantic relationship first started. They dated on-and-off ever since then, followed by their marriage only in 2014.

Ashley Brown is a doting mom to two little boys with her celebrity husband, Adrian Peterson. She welcomed her first son with Peterson, Adrian Peterson Jr., three years before their wedding in 2011. Similarly, the pair’s second son together, Axyl Eugene Peterson, arrived in October 2015.

For Ashley, her children are always her primary priority from the day she gave birth to her first kid. She left modeling and her other jobs to be a full-time mom to her sons. Moreover, the proud mother of two boys decided to start her own business only after her second child reached a certain age.

Besides, Ashley Brown is a step-mom to six of Adrian Peterson’s children from his previous relationships. Reportedly, Peterson had six children other than his two boys with Brown from six different women.

Besides being an NFL wife, the fitness and beauty conscious Ashley Brown is a successful entrepreneur. Gorgeous Ashley is the CEO of her own cosmetic company named Elizabella Cosmetics, which she founded in 2018. She strives to break the stigma of the beauty industry with the belief that the only standard of beauty is your own. Brown began her cosmetic line to remind every lady of their vivaciousness, uplifting their inner confidence while still serving individuality.

Adrian Peterson’s spouse, Ashley Brown, had a keen interest in makeup since her early childhood. She used to enjoy playing with makeup and trying new and different looks. So, her parent provided her with her first makeup kit when she was just five. Ashley’s mom also enjoyed makeup and sold Mary Kay for a while, and Ashley helped her with the inventory. It further helped Mrs. Peterson to achieve her dream of owning her own cosmetics company when she grew up.

Furthermore, the past experiences of Ashley helping her husband establish his career also taught her a lot of lessons to start her company. While talking to Black Enterprise, Brown said that she learned about accounting, having open lines of communication, and being hands-on while assisting her husband in his business. More than that, the most valuable lesson she learned is that no one will manage your business how you would manage it.

Owns A Charity Organization With Her Husband

Peterson and Brown founded the humanitarian organization to empower and encourage individuals and families to work together to bring a positive change in society. Their main mission is to improve the lives of people through resources and economic development. Also, the benevolent-natured couple aims to help eradicate poverty by developing greater opportunities for impoverished individuals.

Featured In Playboy Magazine In 2006

The creative wife of Adrian Peterson, Ashley Brown, is a former model who was featured in various fashion companies and magazines. In 2006, while her future partner, Adrian, represented Oklahoma on the gridiron, she represented the Sooners in Playboy magazine’s ‘Girls of the Big 12’ issue. At the time, Brown did modeling under the name Ashley Thompson. However, the magazine’s print edition with Ashley Brown’s photos is not available at the moment.

Moreover, Adrian Peterson’s wife, Ashley Peterson, was once featured on the TV show Deal or No Deal along with other budding models.

Currently, Peterson and his wife, Ashley Brown Peterson, live a blissful life in the Rivercrest Estates in West Houston with their young boys.