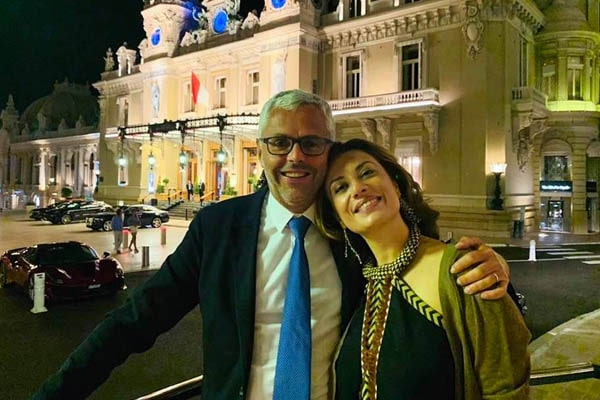 Michel Combes, a well-known French businessman, is the former chief financial officer and CEO of the prestigious American telecommunications company, Sprint Corporation. Sprint appointed Combes as its CFO in January 2018 and later gave him the post of CEO in May of the same year. However, after the company merged with T-Mobile US in April 2020, he resigned. Before joining Sprint, Combes served as the CEO of Europe’s Vodafone company from 2008 to 2012. Similarly, he also worked at Alcatel-Lucent and a couple of ministries.

Like many other famous personalities worldwide, Michel Combes is also usually mute regarding his personal life. Only a few people who are keeping track of him know that he is married to the beautiful French pianist, Christie Julien. Here, learn some more about the successful entrepreneur Michel Combes’ wife, Christie Julian.

Michel’s beau, Christie Julian, has performed in several acclaimed places around the United States, Canada, Russia, and Europe. Some of the famous places where Julien has performed to date include the Kennedy Center in Washington, Lincoln Center, and New York’s Carnegie Hall. Moreover, she plays piano every year at Salle Gaveau in Paris.

Last night we hosted a fun get-together for my @Sprint management team. The best part was when my incredibly talented wife Christie, who is a concert pianist, stunned the team with her playing. So beautiful. pic.twitter.com/bynwflGvdd

Besides being a soloist, Michel Combes’ partner, Christie Julien, regularly accepts invitations to lead masterclasses worldwide, such as in China, Japan, and the United States. Passionate about chamber music, Julian’s music partners are artists like Renaud Capucon, Jean-Marc Phillips, and Dimitri Maslennikov.

Furthermore, Christie Julian even performs at festivals such as Santa Fe, La Jolla, Ohrid, and Great Lakes. Also, she was a member of the preselection jury of the prestigious Marguerite Long-Jacques Thibaud International Piano and Violin Competition in June 2007. Ever since then, she is a member of the artistic committee of the competition.

In July 2017, Christie, with her husband Michel Combes, attended the 2nd edition of the Bal de la Baronne Beatrice, organized by the Monegasque Cultural Association AIDA. Combes and some of the other attendees were in costumes of Maharajas and Princesses of Thousand and One Nights. Queen Fadila of Egypt and French Ambassador to Monaco Marine de Carné de Trécesson were also present. There, Christie brought everyone in emotions by presenting the interpretation of the Danse Macabre by Camille Saint-Saens.

In November 2015, Christie Julien and her spouse, Michel, fell in love with a majestic concert Steinway & Sons’ piano on sale in Drouot. However, they needed to fly to Cairo on the day of the auction. So, they requested their friend to raise up to 80,000 euros ($95,868), the piano’s value, according to the experts.

Wed Secretly To Michel Combes And Welcomed A Son

Aforementioned, Michel Combes usually does not disclose his personal life in public. So does his wife, Christie Julien. The good-looking couple rarely appears in public together and shares very little about each other on their social networking handles. As a result, there are no details on their marriage day and when they started dating.

However, seeing the rare pictures of the married pair in some online sources, they seem to be together way before 2017. In 2017, the British-American visual media company Getty Images had captured them attending the 2017 French Tennis Open-Day Fifteen in Paris, France. Moreover, Michel Combes’ wife Christie has posted a couple of photos of them together on her Facebook and Instagram. Seeing their pictures, it looks like the secretive pair is happy with their marital life and feels blessed to have each other as life partners.

Furthermore, various online sources claim that Christie’s husband, Michel Combes, is a father to three children. However, going through the social media pages of Christie, it seems like Combes and his wife have only one son, Leonard Combes. They welcomed their son, Leonard, in April 2020. Christie’s Facebook and Instagram are full of pictures of her toddler with her husband, Michel Combes.

Currently, Michel Combes and his beloved wife, Christie Julien, live a happy life with their son, Leonard Combes, in Paris. They often visit the United States for a family vacation and their work.