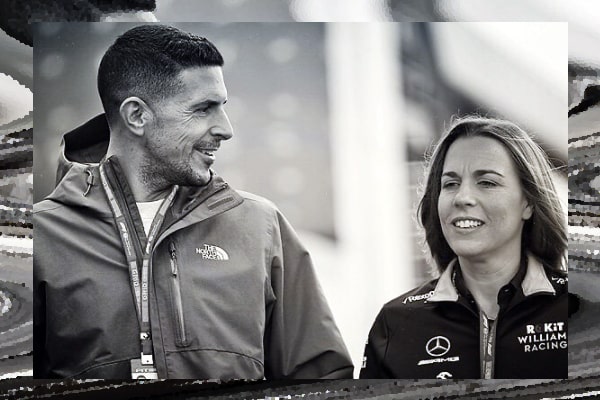 Claire Williams' Husband Marc Harris is a wonderful person who helps in his wife's growth without compromising his. Image Source: Marc Harris' Instagram.

Claire Harris or best known as Claire Williams, is the former Deputy Team Principal of the Williams Formula One racing team who resigned on 7 September 2020. She enjoyed a successful career as a director and now is in a blissful marital life with her husband, Marc Harris.

The Harris couple got married in 2018 and have welcomed two sons together. Well, we have ample talk about Claire Williams, but her husband, Marc, has become a new sensation after he slammed the streaming giant Netflix.

Hence, please stick with us until the end to know what angered Claire Williams’ husband, Marc Harris, with added information.

Aforementioned, Claire Williams’ partner, Marc Harris, is a beautiful person, and they have been married since 2018. However, Marc is famous through his own work.

Marc is a sports agent at the Marc Harris Sports Management LTD since November 2016. He previously worked at Madison Sports Group as Chief Commercial Officer for 11 months in 2016.

According to Marc Harris’ LinkedIn, he also worked for Westfield Europe, ATP Tour Inc as Head of Brand Solutions and Director commercial. Moreover, he served as the Head of the commercial at Willams F1 Team for six months in 2013.

While going through the extensive resume, Marc appears to have graduated from Bristol, UWE, with a Bachelor’s degree in Hons Politics and European Studies. Thus, the long CV dates back to September 1999 as he worked as Talent Agent for RBI Sports.

Claire Williams’ husband, Marc, also has experience as an account director at M&C Saatchi Sport & Entertainment and IMG. Through years of dedications and roles in several positions, Marc Harris’ net worth must have seen a significant rise.

Besides a thriving career, Marc Harris is in a happy marital life with a successful wife, Claire Williams. Thus, let’s look into their married life a little.

The Harris couple is one of the sweetest pairs in the F1 world. Unfortunately, there are no details about how they began dating but seeing them together makes one sense that they were ‘meant to be’ couple.

Furthermore, Harris and Williams are inseparable. Claire’s partner accompanies her to events and shows his support to the fullest. Well, they welcomed their bundle of joy in 2017. which we shall talk about later.

But did you know Claire was eight months pregnant when her beau proposed to her? While talking in an interview, she revealed that she was at home on the sofa when Marc proposed using a Haribo ring. Yes, Haribo ring.

Marc Harris’s wife Clair later clarified that she was eight months pregnant, so he couldn’t buy her a proper ring. She further exclaimed that the proposal was a total surprise and said, “yet had always said that was where I wanted him to do it.”

After a couple of months, the power duo was wedded in an intimate ceremony at Claridge’s London in January 2018. Claire looked stunning in a Caroline Castigliano gown with hand embellished embroidery with Swarovski crystals, while Marc looked dapper in a charcoal black suit.

Even after several years of togetherness, both Marc and Claire never fail to praise one another for their achievements. Well, appreciation is essential in a relationship, and the Harris couple seems to be a pro at that. Hence, they are enjoying a perfectly balanced marital life and embraced parenthood swiftly.

Father of Three Kids; Welcomed One With Claire

Aforementioned, Claire Williams and Marc Harris embraced parenthood before they exchanged vows in London. They announced their pregnancy on April 5, 2017, via Twitter.

Congratulations Claire and Marc! We are delighted to announce the birth of Nathanial (Nate) Louis Harris, born at 1030am this morning.

The birth of the young Harris was announced via Twitter. Claire Williams’ son, Nathaniel Louis Harris, is growing up in a healthy environment surrounded by inspiring people.

Furthermore, Williams’ husband uploads pictures of their baby boys every once in a while and updates his thousands of followers. It turns out; Marc already had an experience of fatherhood as he has two daughters from his previous relationship.

Sadly, the Williams-Harris family suffered from a tragedy as Marc Harris’ father-in-law Frank Williams died on November 28, 2021. He had been admitted to the hospital on Friday and died peacefully on the 28th. Harris’s wife, Claire informed the Formula One members about the death of her father, and tributes for the legend have been pouring in since the news was announced.

During these difficult times, Marc is undoubtedly the pillar of strength for his beloved wife, Claire. Moreover, Harris must be close to his brothers-in-law, Jonathan Williams and Jaime S. F. Williams.

While going through Claire Williams’ husband, Marc Harris’ Instagram, one can quickly notice that he often shares his favorite Netflix series on his feed with the fun review.

However, Marc is seemingly upset about the third season of Drive to Survive, covering the history of the challenging 2020 season plagued by the pandemic.

One amongst the team affected by COVID-19 was Williams, who had to resort to the team’s sale to keep the name on the grid in the middle of the year. The deal ended the permanence of the family of the same name on the second most successful team behind Ferrari.

However, Marc claimed that the previous story was ignored by the production, which enraged him. Maybe his anger came as he led the team before the sale to the Dorilton Capital group.

Hence, Marc took his frustration to Twitter and tweeted, “It is impossible to hide the level of frustration and annoyance I feel over the final season of Netflix’s Drive to Survive.”

He continued to the point that the show’s goal was to bring sports fans closer and give the idea of the season’s teams’ situation.

Marc added that “it is hard to believe that there was a more important story than the sale of one of the successful teams.”

Well, Claire Williams’ husband, Marc Harris’s concern regarding the team seems legit. He is a successful agent himself and a wonderful father doing a great job raising three kids. Hence, we do hope to see more of him in the coming days.