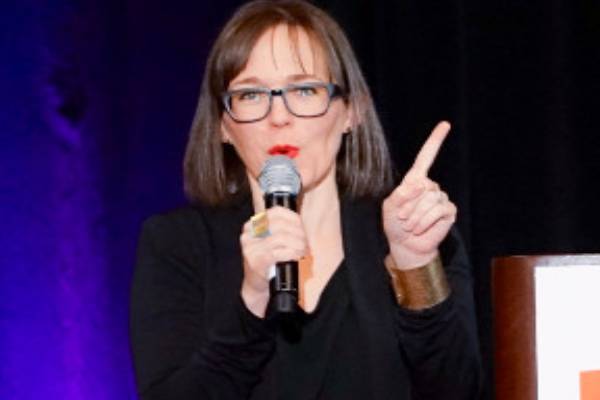 Alan Hunter served as a full-time host in MTV from 1981 to 1987. He is mainly known for being the original video jockeys on MTV along with Nina Blackwood, J.J. Jackson, Martha Quinn, and Mark Goodman. Although all five of them are no longer associated with MTV, they all are equally famous today.

Alan’s personal life has become a topic of interest for many years as he has remained in the limelight ever since his career started. He has been married twice in his life. After the VJ’s first marriage failed, he got married to Elizabeth Bradley Hunter.

So, without further ado, let’s know about Alan Hunter’s wife and their love life.

Met At A Fundraiser

As mentioned earlier, Alan Hunter shares a blissful marital life with Elizabeth Bradley Hunter. The couple had their first contact in 2005 when Elizabeth A. Bradley decided to leave her job of eight years in Manhattan, New York as a director of development at Andrew Lauren Productions. After moving to Alabama, she had her relatives send out feelers to everyone they knew in the filmmaking community there.

Then, when Alan Hunter’s wife Elizabeth found the way to contact him, she sent him an e-mail message saying he was her cousin’s best friend’s mother’s little sister’s high school boyfriend and asked him to help start a screenwriting workshop. A few weeks later, she attended the fund-raiser for a film festival that he had helped create.

Alan was charmed by his wife’s cosmopolitan air while she was impressed with his deliberate nature and social intuition. They began talking and did not stop and eventually planned on going on a date.

After their first introduction, Elizabeth and Alan became friends and their feelings grew stronger. The inseparable pair went on their first date at another fund-raiser where he was the auctioneer. As their relationship became more serious, Alan Hunter’s then-girlfriend called home with the news.

Moreover, Alan’s partner let the lease of her Manhattan apartment expire and moved in with him. Then, during a trip to New York in November 2006, Alan popped the question after they dined at Café des Artistes. She accepted the proposal, and it reportedly began to rain.

On July 7, 2007, the lovebirds walked down the aisle at the First United Methodist Church. At the time of their wedding too, it was raining. Nevertheless, nearly 100 guests attended their marriage ceremony.

Since then, the couple, with an age gap of 18 years, has been living a wonderful life together and enjoying their time as married pair. In addition, their love is still going strong.

The Couple Welcomed Two Children Together

Since July 2007, the married couple has been enjoying a blissful marital life. In over two decades of togetherness, the duo welcomed two children together. One of Alan and Elizabeth Hunter‘s sons is Lochran Hunter. However, it is not known when Alan Hunter’s wife gave birth to their boys.

Similarly, their other son’s name and birth date have not been revealed yet. The couple is raising their kids away from the media limelight. Nonetheless, in October 2015, Elizabeth Bradley Hunter’s husband tweeted a photo of her and their son attending a NU game.

Apart from Lochran and their other son, Alan Hunter’s spouse is a doting stepmother to his two children from his first marriage. Likewise, not much has been revealed about her stepson and stepdaughter.

But what we came to know is that when she first met her husband, her stepdaughter, Callie Hunter, was nearing the end of high school studies while her stepson, Dylan Hunter, was in college. Nonetheless, Elizabeth must have a good relationship with both stepchildren.

Alan Hunter has made a good name for himself in the entertainment industry. Likewise, his wife is also doing great in her profession.

Alan Hunter’s spouse currently works as an assistant professor in Drama and Director of the Fabula (b) Theatre + New Media Lab in the Performing Arts Department at Washington University in St. Louis.

Elizabeth had attended the University of Michigan, where she received a degree in Bachelor of Arts – BA in English and Psychology. Next, she earned an MFA degree in Dramaturgy and Script Development at Columbia University. Then, Alan’s partner received a Doctor of Philosophy (Ph.D.) in Theatre from Northwestern University.

From 2003 to 2005, Elizabeth worked as a Head of Development at Andrew Lauren Productions. Then, she joined the Alabama Moving Image Association, where she worked as a Director of Sidewalk Screenwriters’ Lab.

Elizabeth then went on to work at Metro Birmingham Living and Sloss Performing Arts. Her first job as a professor was at Samford University, where she was Theatre Director and Adjunct Professor. Then, she taught as an assistant professor at San Fransisco State University and eventually joined Washington University.

Moreover, Alan Hunter’s wife Elizabeth is the founder of Fabula(b) Theatre. She has gained significant fame for her contribution to the theatre sector.

Well, Elizabeth must be doing great in her life. Unfortunately, she does not have any social media account and keeps her personal life private. Let’s hope she gains more success in her profession and has a great life ahead.