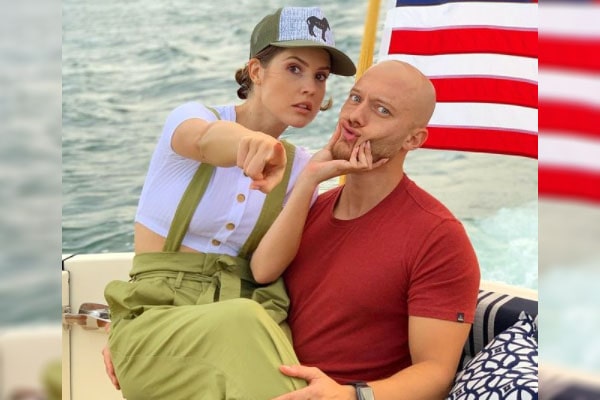 Amanda Cerny is a well-recognized American actress, model, and social media star who initially rose to fame from the now-defunct social app Vine. Born in Pennsylvania and raised in Connecticut, Cerny has over 35 million fans across social media, including Instagram and YouTube. The versatile television personality Amanda Cerny is also passionate about directing. As a director and actress, she has performed in and created commercials for Fortune 500 brands, music videos, and traditional films, and T.V. shows.

Along with the rising fame of Amanda Cerny, millions of her fans worldwide are always curious to know her dating life. Lately, she is in a romantic relationship with her fellow social media star, Johannes Bartl.

So, here, please take a look at Amanda Cerny’s boyfriend since 2017, Johannes Bartl, and their relationship.

The famous internet personalities Amanda Cerny and Johannes Bartl reportedly started dating in 2017. Though they used to appear together in various shows and YouTube videos before 2017, their relationship went public only after the summer of 2017. Their private relationship became public after they began collaborating for their YouTube vlogs. Moreover, the romantic pair made their fans clear about their romance by attending the 2017 Streamy Awards together.

Ever since Amanda Cerny began dating Johannes Bartl, the pair often shares their intimate pictures on their respective social media handles. Moreover, they regularly make videos with one another and share them on their YouTube channels.

Recently, Amanda shared a picture on her Instagram page flaunting her handsome boyfriend and their dog named Falco, mentioning them as her family. Similarly, Johannes also does not hesitate to show his sweetheart and his love for her on his social media handles. In January 2021, he shared a photo with Amanda and their fur baby, Falco, on his Instagram after Amanda surprised him with a Tesla Y as a Christmas gift. And, undoubtedly, he didn’t forget to tell his girlfriend that he loves her.

Going through the social media pages of Amanda and her boyfriend, Johannes Bartl, it seems like the beautiful pair are currently in a live-in-relationship. They are not married yet. However, looking at their chemistry and their growing love for one another, soon Johannes Bartl will be recognized as Amanda Cerny’s husband rather than her boyfriend.

As hinted above, gorgeous Amanda Cerny’s boyfriend, Johannes Bartl, is also a social media star. He has over 1.5 million followers on his Instagram page and over 420K subscribers on his YouTube channel. Besides that, Bartl is also an Austrian fitness model and a personal trainer. He is a certified CrossFit trainer, TRX trainer, Master Instructor for CrossCore, and many more.

Bartl came to the United States from Austria in 2014 and became its permanent resident in 2020.

According to Johannes Bartl’s official website, he has been a personal trainer for over 12 years and has over 20 years of practicum in fitness. Currently, 33 years old athlete Bartl began his fitness journey at the young age of 12, doing calisthenics like sit-ups, push-ups, and pull-ups. Also, he involved himself in soccer, swimming, and volleyball teams to keep himself fit.

Through his website, Body By Bartl, Johannes Bartl aims to provide its viewers with the knowledge and coaching they need to gain muscle mass, lose weight, and build their dream body. You can watch his fitness tips as well as some snaps of his daily life on his Instagram pages, Twitter, and YouTube Channel.

Before being in a committed relationship with Johannes Bartl, Amanda Cerny dated several celebrity personalities for some period. In mid-2016, there were rumors that she was dating the Canadian singer Justin Bieber. Reportedly, the rumors of Amanda Cerny dating Bieber made headlines after Cerny shared a video of them hanging out at Doheny Room on her Instagram. However, there are no records of these two responding to their romance rumor to date.

Furthermore, according to sources, Amanda Cerny dated the American actor and stand-up comedian Dane Cook from 2011 to 2014. Despite their 19 years age difference, they were one of the most-loved power couples at that time.

However, the former pair could not give continuity to their relationship for long and eventually separated.

Nevertheless, she is happy with her current boyfriend, Johannes Bartl, and probably planning to get married and have children with him soon. We wish the couple’s affinity and care for one another keeps growing with time, and may they be one of the long-lasting couples in the celeb world.