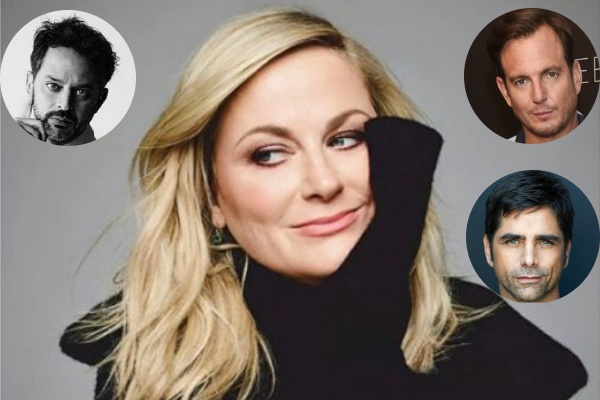 Amy Poehler has broken up with Nick Kroll, whom she dated after the divorce with Will Arnett. Read more to know about her current boyfriend. Image Source: Social Media.

Amy Meredith Poehler (Amy Poehler) is a famous American actress, writer, comedian, producer, and director. This actress, who has studied improvisational theatre, is the founder of the Upright Citizens Brigade Theatre. She has starred in several television series such as Saturday Night Live and Weekend Update but is most famous for her role as Leslie in Parks and Recreation, an NBC sitcom. She has not only made her name through her acting but has also shown excellent skills as a writer, producer, and director.

Amy Poehler has been doing great for herself and the entire television industry.; this fact can be testified by the fact that she has received a star on the Hollywood Walk of Fame. Along with that, she has a line of achievements like the Golden Globe Award for Best Actress and the Critics’ Choice Award. Even after all the contributions, she is in the highlights mainly because of her relationships. Unlike her professional life, her relationships have been a debacle. After the shocking divorce from her actor husband, Will Arnett, and break up with Nick Kroll, whom she dated after ex-husband Will Arnett, Amy Poehler’s relationships have been the talk of the town.

You might also be eager to know who Amy Poehler’s current boyfriend is. So read the whole article to find out.

You probably had heard about the marriage between Amy Poehler and Will Arnett. The celebrity couple met through a common friend in 2000. After dating for some time, they decided to tie the marital knots in August 2003. Poehler and Arnett also have two sons together- twelve-year-old Archie Arnett and ten-year-old Abel Arnett.

Everything seemed to be going fine with the family until the news of their divorce came in the media. Arnett and Poehler decided to part their ways in September 2012 but filed for divorce only in April 2014. On the brighter side, they have laid an example for people who say divorced couples cannot stay friends. They decided to take a joint-custody of the kids and were recently reported to be quarantining together, with the kids, amidst the pandemic.

Well hands down for the ones who are expecting them to get back together, as Will Arnett is now in a relationship with girlfriend Alessandra Brawn and welcomed their son Alexander Denison Arnett on May 27, 2020.

Also Read: Everything About John 5’s Wife, Rita Lowery. Does The Couple Have Any Children Together?

Why Did Poehler Break Up With Nick Kroll?

The title might have shocked you. But yes, after the divorce with Will Arnett, Poehler started dating comedian Nick Kroll. Kroll and Poehler had known each other for a long time before they started dating. Poehler had even written about it in her memoir Yes Please.

However, this relationship underwent the same fate as the previous one. The fellow comedian couple decided to part ways stating the reason for the breakup as mismatched schedules.

Any Other Relationships? And, Who Is Amy Poehler’s Current Boyfriend?

Even after several failed relationships, Amy Poehler continued rowing the boat of love and struck John Stamos and Benjamin Graf. Amy went on a date with John Stamos, and it just ended there. However, she started dating Benjamin Graf, an NYC- based attorney. Radar Online says that they split up after two years of togetherness.

This was the last known relationship of Amy Poehler. The celebrity who does not hesitate to speak about sex in public has remained silent about her current relationship. So we can speculate that Amy Poehler is currently single. Even if she is dating someone, she will probably reveal it pretty soon as she cannot keep anything from her lovely fans.