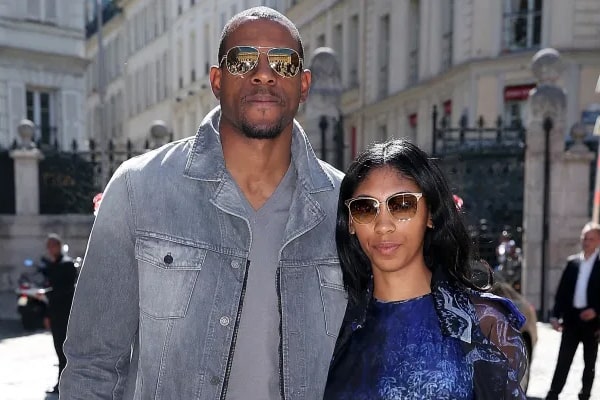 Andre Iguodala and his wife Christina Gutierrez's never ending passion for one another is inspiring. Image Source: Getty Images.

There are very few players who are married to their childhood sweethearts in the NBA world. Some of them include LeBron James, Deron Williams, Andre Iguodala, and many more. Today, we will be talking about the Miami Heat player, Andre Iguodala’s wife Christina Gutierrez, and their relationship.

The saintly man, Andre, has proven his success and exhibited his skillful defensive ability on the court but has equally expressed his love for his family and children. Therefore, without further ado, let’s come to the point and learn about Andre Iguodala’s wife, Christina Gutierrez aka Christina Gutierrez Iguodala.

Talk about leading a super-secret life except for rare television appearances and involvement in husband’s games, Andre Iguodala’s partner is a pro at that. Zero participation on social sites in this era is remarkably questionable. But, Mrs. Iguodala is maintaining her privacy.

Tne couple has been together since 15 and has gone through several ups and downs. Compatibility is a real thing in a relationship and holds the key. Perhaps, that’s why Andre and Christina have been together for so long. Although there is almost zero information about the couple, the couple went to the same high school in Springfield, Illinois. Furthermore, they were also the prom couple.

Although Andre Iguodala’s wife, Christina Gutierrez, rose to fame because of her husband’s popularity as an accomplished NBA star and an author, she must have been enjoying her career in private. However, she has made several public appearances alongside Andre such as the Jimmy Kimmel show, major games, etc.

After several years of relationship and going through every kind of hurdle together, the Iguodala couple finally got married in 2015.

Andre Iguodala’s son served as the best man who wore a tuxedo similar to his dad while Mrs. Iguodala wore Reem Acra and then Zuhair Murad for the wedding. Klay Thompson congratulated Andre via an Instagram post captioning, “got a ring, finals MVP, and got married in the same summer. That’s just amazing. Proud of you, bro!”

The couple has been together and in love with one another ever since without igniting the rumors of conflicts. As mentioned previously, the couple has a son, Andre Tyler Iguodala II, who was born in 2007. The father-son duo shares a great bond and loves spending time together.

Although love is not documented via social media, the Iguodala family is happy and thriving.

Andre Iguodala’s Daughter Has an IQ of 151

Yes, Andre Iguodala has a daughter with his ex-girlfriend, Clayanna Warthen, named London Iguodala. London was born in 2009, and that makes things a little blurry between Andre and his wife, Christina. However, they are together today so that things might have worked out.

Getting back to London, TMZ reported that she has an IQ of 151, putting her into the top 97 percent of the country. Furthermore, Iguodala’s ex-girlfriend, Warthen, wanted $58,000 per month from the NBA player as child support. She further accused the NBA veteran, Andre wouldn’t let his daughter meet his other child.

As of now, Andre Iguodala is enjoying his life with his equally secretive wife, Christina, and son, Andre Jr., with his burgeoning career as an author. Let’s hope success and prosperity remain in the Iguodala family.