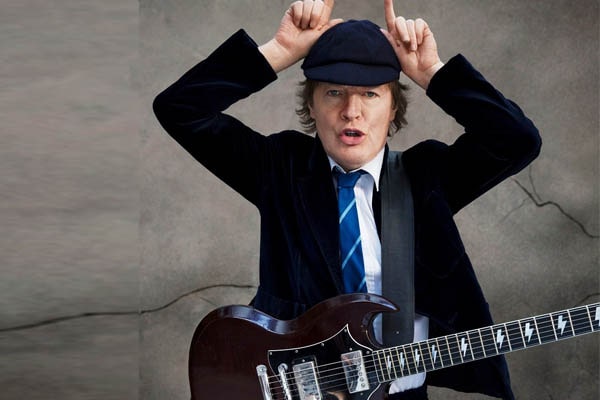 Angus Young has been married to Ellen Young since 1980. Image Source: Social Media.

Born Angus McKinnon Young, Angus Young is an Australian rock ‘n’ roll legend best recognized as the lead guitarist and the co-founder of AC/DC, an Australian hard rock band. He co-founded the band AC/DC with his brother and late musician, Malcolm Young, in 1973. Young is famous for his zestful performances, his own style of Chuck Berry‘s duckwalk, and his school-boy uniform stage outfits. Due to his great performance as a guitarist, the Rolling Stone magazine ranked him 24th in its 100 greatest guitarist of all-time. He and other members of his hard rock band are the 2003 inductees of the Rock and Roll Hall of Fame.

The rockstar is popular for his low profile life. He rarely shares about his family life before the media. However, those who are keeping track of his life throughout the past decades might know that he is a married man. Young has a beautiful Dutch wife named Ellen Van Lochem, aka Ellen Young. Here, meet Angus Young’s wife, Ellen Young, and get to know some of her personal facts.

Ellen Met Her Husband Through Her Friend

Angus Young’s spouse, Ellen Young, was not famous before meeting the love of her life. She was a normal lady living her life entirely far from stardom. Ellen came to prominence only after getting hitched with one of the greatest artists of all time, Angus Young. She first met Angus with the help of her college friend, Dutch rock guitarist Adrian Vandenberg.

While speaking on the White Line Fever podcast in 2018, Vandenberg opened up about introducing the AC/DC guitarist Angus Young to Ellen Young. He said that Angus Young’s wife, Ellen was his friend. They knew each other when Vandenberg was studying at a university in the Dutch City of Arnhem. He and Ellen often saw each other in bars and rock shows.

Vandenberg continued saying that he had a rock band together called TEASER, and they had an album. He and his band were invited to assist AC/DC on a couple of shows. One of his shows was close to the town he was studying in and where Mrs. Young also lived. So, she requested him to put her on the guest list, and it worked. A couple of weeks later, Ellen called Adrian and told him that she was with Angus Young. Angus and Ellen married some years after they met in 1980.

It has been over four decades since Ellen Young married her better-half, Angus Young. But the love between them is as strong as it was in the beginning. And, the reason behind their long-lasting relationship is undoubtedly their understanding and care for one another. Both of them instruct each other whenever needed and obeys too. Angus Young’s better-half, Ellen, loves ordering her husband whenever she feels he needs her directions.

Some years ago, one of the Guardian magazine’s journalists asked for a snap with Angus and his other band members. As the band members of AC/DC, including Angus, are pretty short, Ellen became cautious regarding her husband’s appearance in the photo. So, she ordered Angus to stand on the chair as she felt he would look stupid otherwise. Angus obeyed her instructions without any comments and stood on a chair, appearing taller than his actual height of 5ft 2 inches.

It shows that Angus obeys almost every instruction of his wife. And, we hope the same commitment and loyalty is in Ellen as well. We wish the couple all the best for their upcoming years, and may their togetherness remain strong till their last.

Co-owns Homes In Different Parts Of The World

Angus and his wife, Ellen Young, own homes in three countries, Australia, Netherlands, and the United Kingdom. They have an impressive home at Kangaroo Point, New South Wales, where they currently reside.

Similarly, Angus and Ellen have a home in the Dutch town of Aalten, Netherlands, where Ellen grew up. They built their mock chateau in Aalten a decade ago. Likewise, the happily married couple, who have no children, have a home in the UK where they often visit during their spare time from work.

Furthermore, like Angus, his beloved wife, Ellen Young, also seems to prefer to keep her personal and professional life far from the media scrutiny. As a result, what she does for a living at the moment is not available to the public. We hope Angus Young will soon reveal some of her details so that his fans can know her better. For now, Angus Young’s wife, Ellen Young, lives a blissful life away from unnecessary media drama.