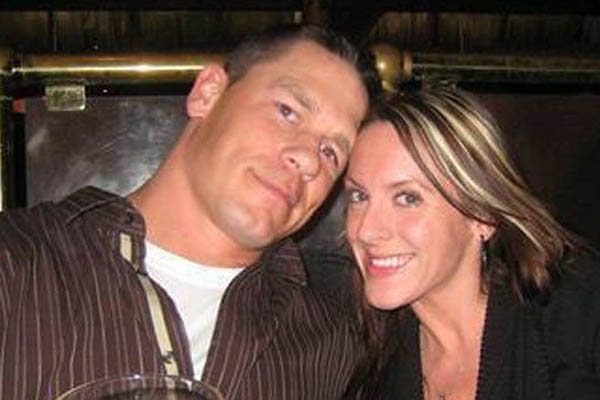 The world-renowned wrestler, John Cena, who calls himself ‘The Prototype,’ captured the UPW title in 2000. After signing a contract with Ohio Valley Wrestling and claiming the OVW heavyweight title in 2002, he debuted in WWE. Some years later, he clinched the United States Championship title and since then is known globally, due to his hip-hop albums and appearances on numerous TV shows and films. Currently, the greatest wrestler of all time, John Cena, is signed to the WWE on a part-time deal.

Those who are keeping up with John Cena know that he is in a marital relationship with Shay Shariatzadeh. However, this is not the first marriage of the Marky Mark of Wrestling, John Cena. Cena was previously married to Elizabeth Huberdeau, for three years. Here, learn some details about John Cena’s ex-wife, Elizabeth Huberdeau’s short-lived marriage with him, and the reasons behind the end of their marital life.

John Cena And Elizabeth Huberdeau Met During Their High School

John Cena’s ex-wife, Elizabeth Huberdeau, was not a famous personality like John Cena. However, various online sources claim that she was the high school sweetheart of John Cena. The former husband-wife duo, John Cena and Elizabeth, met during their high school years. As John Cena attended two high schools, Cushing Academy, Ashburnham, and Central Catholic High School, Lawrence, it is unsure which high school the pair first met in.

John Cena rarely talked about his bonding with Elizabeth Huberdeau. So, the exact date he began dating Elizabeth is still a mystery. The legendary wrestling champion John Cena made his relationship with Huberdeau public for the first time while promoting the 2009 film 12 Rounds. He announced their engagement with the Seattle Post-Intelligencer simply saying that they were going to marry that year. Cena and Huberdeau married five months after his announcement, on 11 July 2009.

Cena And Liz Were Married For Three Years

Aforementioned, John Cena married Elizabeth Huberdeau in 2009 in a private ceremony. Everything was going well between John Cena and his then-wife, Elizabeth, till May 2012. The wrestler filed for a divorce in May 2012, which got finalized two months later in July. According to TMZ, John Cena’s ex-wife, Elizabeth Huberdeau, claimed that she was blindsided when Cena filed to end their marriage out of the blue.

ALSO READ: Where Is Bam Margera’s Ex-wife, Missy Rothstein, After Her Divorce?

John Cena’s divorce from his first wife, Liz, was a hot topic in WWE that year. The same year, he also lost to The Rock at Wrestlemania. Eventually, Cena said on a WWE programming that his loss with The Rock sent his life into a tailspin, both professionally and personally. John Cena told The Rock that he could not get over his obsession with the fact that he had failed. It clearly implies that his separation from Elizabeth and his loss to The Rock at Wrestlemania are somewhat related.

The separation process of John Cena’s divorce from Elizabeth Huberdeau ended up being pretty messy. A month after Cena filed for divorce in July 2012, Huberdeau accused John Cena of cheating on her. Elizabeth’s lawyer, Raymond Rafool, told TMZ that they were getting tips John had been messing around while he was married to Elizabeth, which, if proven, could reportedly be grounds for Liz to challenge their prenuptial agreement.

Furthermore, John Cena’s ex-wife, Elizabeth’s lawyer, told TMZ that he and his client were looking for concrete proof of John being unfaithful. However, they never discovered anything. As a result, Liz withdrew her accusations and settled with Cena out of the court privately.

Reasons Behind The End Of John Cena’s First Marriage

According to Heavy, John Cena’s marriage with Liz Cena fell apart due to their disagreement regarding their house’s remodeling. The house which the now-estranged couple was remodeling was the reason behind their visit to the courthouse.

So the story goes, the remodeling of their house led to undeniable conflict between John and Liz, which further led them to divorce. TMZ reported that they found documents revealing how bad the situation was. One of the contractors placed a charge on the house for $110K, swearing that Cena did not give him payment for the work.

Besides, other online sources state that the wrestler’s unwillingness to have children was also one reason behind John Cena’s ex-wife, Elizabeth’s separation from him. He always kept his career in the first place, just like the legendary actress Betty White who never had her own biological children. As a result, Cena could not give enough time to his first wife, Elizabeth Huberdeau, resulting in their separation.

Soon after separating from Elizabeth Huberdeau, John Cena dated Total Bellas star, Nikki Bella. They even got engaged and were planning the wedding, but eventually, John and Nikki ended their relationship. Currently, Cena is in a marital relationship with Shay Shariatzadeh. As for Elizabeth, she is reportedly dating Eli Ayoub.