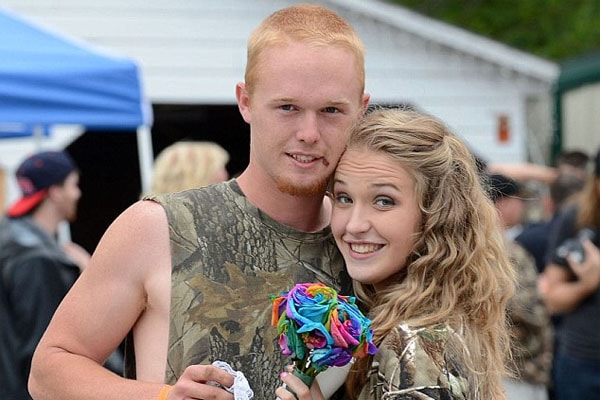 Anna Shannon‘s ex-husband Michael Cardwell was born on 12th of March 1992. Michael Cardwell tied the wedding knot with his ex-wife Anna Shannon aka Chickadee on 3rd of May 2014 in Georgia. The former romantic couple shares a child together named Kylee Madison Cardwell. Not only that but, Michael is also the step-father for her other daughter Kaitlyn Elizabeth Clark.

Michael Cardwell Had Welcomed A New Baby Daughter In 2015

As stated earlier, Michael Cardwell is a father and has a daughter Kylee Madison Cardwell who was born on December 9, 2015. Kylee is a beautiful kid inherited by her father’s Michael’s charming blue eyes.

As mentioned earlier, Anna Shannon’s ex-husband Michael has a step-daughter named Kaitlyn Elizabeth Shannon. However, he treats Kaitlyn as if she was his own biological daughter. Not only that but, Michael is often called “Daddy” by Kaitlyn. This clearly reflects the love and strong bond between Michael and his two daughters.

Michael Cardwell’s Ex-Wife Was A Victim Of Child Molester

Michael Cardwell believes his ex-wife Anna to be the strongest wife in the world. His mother-in-law Mama June had a huge falling out with Anna after June was reportedly hanging out with Mark McDaniel, the man found guilty of molesting Anna when she was eight years old.

However, Cardwell’s mother-in-law June denied her affiliation with the released prisoner McDaniel, and their dispute spilled over onto network television in the form of rivaling interviews. The two haven’t seemed close ever since, however, Anna is close with her sisters Lauryn Shannon and Jessica Shannon.

According to Radaronline, Michael Cardwell’s ex-wife Anna forgave her mother June on Christmas of 2015. Also, Mama June thought that Michael would have been a good first husband.

Not much is known about the truck mechanic Michael Cardwell’s earlier relationship expect for the fact that he got married to his ex-wife Anna Shannon and soon split in April 2017 after 3 years of their happy married life. The news of their separation was all over the Internet.

The former couple splitting news was confirmed when both changed their marital status to separated on their social media handle. However, Anna confirmed that they both love each other a lot no matter what. As for now, Michael Cardwell is happily single but still takes care of his daughters.