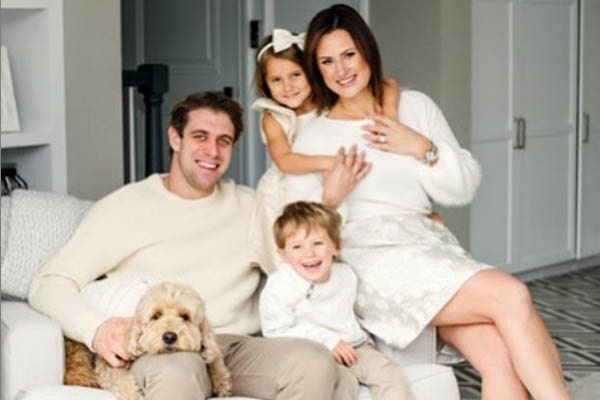 Anže Kopitar is the first-ever Slovene professional ice hockey center to play in the NHL. He debuted in NHL in 2006 and currently serves as a player and captain for the Los Angeles Kings. Th2e thirty-three years old pro ice hockey center who has spent his entire NHL career with the LA Kings got the position of the team’s captain from the 2015-16 season. He is most notably famous for both his offensive and defensive play.

Married Anže Kopitar After Dating Him For Eight Years

The husband-wife duo, Anže Kopitar and Ines Dominc, met for the first time in 2005 while Kopitar was in Maribor to compete at an under 18 World Championship. They started dating from then and are together ever since. Though their romance began blooming in 2005, Ines reportedly moved with Anže in LA just a few years before their wedding.

Anže Kopitar married his longtime girlfriend, Ines Dominic, in 2013 in a lavish ceremony. Their marriage ceremony took place in Ljubljana, Slovenia’s Otocec castle. Kopitar and Dominc exchanged their wedding vows in front of the castle in the presence of their close friends, family members, and Kopitar’s teammates.

Furthermore, the groom, Anže Kopitar, looked striking in an elegant black dress with a bow tie while his bride, Ines Dominc, was in a luxurious classic white wedding dress. Reportedly, a downpour somewhat spoiled their big day.

It has been over fifteen years since Kopitar and Dominc are together, and their love for one another is growing with time. Kopitar regularly posts pictures of his beloved wife on his social media handles, expressing how thankful he feels to have her in his life. Moreover, Anže Kopitar’s wife, Ines Kopitar, often accompanies her celebrity husband on several red carpet events. We hope their relationship remains strong till eternity.

Have Two Kids With Anže Kopitar

Anže Kopitar’s wife, Ines Kopitar, is a loving and caring mom of two adorable kids, a son, and a daughter. She gave birth to her first child with Anže, daughter Neža Kopitar on 14 March 2015 Saturday. The proud father, for the first time, Kopitar, announced the happy news of his girl’s birth via a tweet. His team, LA Kings, had even shared a picture of the newborn on their Instagram page. Similarly, Anže Kopitar’s wife, Ines, delivered her second child, son Jakob Kopitar on 5 October 2016. Moreover, they have a dog named Gustl, whom they treat as their child.

Ines and her husband, Anže Kopitar, are together raising their kids well. They often take their little ones on holiday trips to various places and nations. Moreover, the pair’s children also attend their dad’s games during their free time from school. Similarly, Anže and his spouse, Ines, also organize varieties of games to keep their kids entertained during their vacation.

Anže Kopitar And His Wife Are Big Marvel Movies Fans

Anže Kopitar and his longtime wife, Ines Kopitar, are pretty big fans of Marvel movies. While talking to a magazine, Kopitar said that whenever a Marvel movie comes out, he and Ines re-watch all the movies. The romantic married pair finds fun in watching those all again.

Currently, Anže Kopitar’s wife, Ines Kopitar, does not seem to be engaged in any profession. Reportedly, she was a caddie for her then-boyfriend, Anže, during his Eleven Charity Golf Tournament in Bled, Slovenia. More than this, not much else is known about her.  It looks like she stays home to look after her kids and their home as a homemaker while her husband travels playing ice hockey with his team. But we hope to see more of Anže Kopitar’s wife, Ines, in the upcoming days.