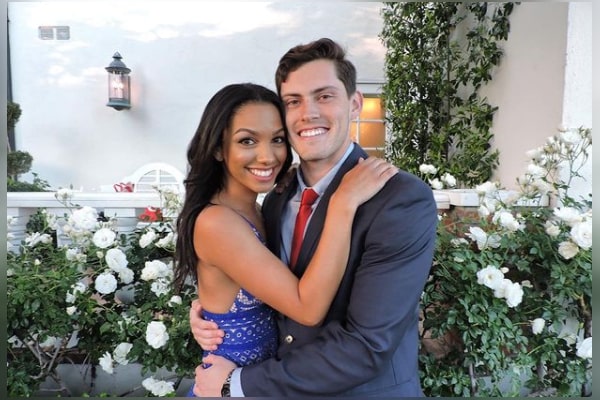 The talented daughter of Jamie Foxx, Corinne Foxx is an American model, actress, TV presenter, writer, and social activist. The 5’7″ celebrity child began her career as early as six, appearing on her father’s show.

Aside from appearing in magazine covers and fashion shows, she often accompanied her father on red carpets. Corinne Foxx would eventually stop doing so as she found love with Austin Lantero.

Below let’s dig up some interesting talks regarding Jamie Foxx’s daughter’s relationship. Also, stick till the end to know if Austin Lantero is still Corinne Foxx’s boyfriend.

Austin Lantero only gained attention after becoming the other half of Jamie Foxx’s eldest daughter, Corinne Foxx. Lantero, similar to Foxx is also a native of Los Angeles, California.

The graduate from the University of Southern California is working as a manager in Range Media Partners, according to his Linkedin profile. He also worked as an FP&A senior analyst for Fandango and motion creative talent assistant for CAA.

The titles linked with Austin tell us that he is just an ordinary California guy with no showbiz industry involvement.

Since Austin Lantero is just a regular guy, there is nothing available regarding his previous lovelife. As for the Dolce and Gabbana model, there has not been any confirmed relationship, but she had been linked heavily with Canadian rapper Drake.

Through the 2005 Academy Award Winner for Best Actor, Corinne was able to meet with Drake. The 27-year-old has never been silent about her love for Drake’s music which instigated the rumors but never materialized.

They both are natives from California, and both studied at the University of Southern California; we can assume they might have met there.

Both the LA Model and the FP&A senior analyst shared their appreciations and moments on their social media. It sure looked like Corinne Foxx and Austin Lantero were meant to be forever by the looks of it.

Never Missed Out On Special Events

Corinne Foxx and Austin Lantero were in deep love and spent all the special occasions together. According to the former cheerleader, her boyfriend would never miss out on the special event, specially valentines day.

Jamie Foxx’s daughter would also travel back to her loved one to spend time together on special occasions in the middle of her shoots.

The California native would also accompany the social activist on her special night and was also there when she became the 2016’s Miss Golden Globes.

All Good Things Come To An End

Even though the pair seemed happy with their relationship, sadly after three years of togetherness, Corinne Foxx and Austin Lantero parted ways. No one was expecting such a separation as the former love birds looked rock steady and stable.

The aftermath of their separation triggered more anxiety in Jamie Foxx’s daughter. There is not much info available regarding the breakup as both individuals remained silent about it.

We are not sure whether Corinne Foxx and her ex-boyfriend are on good terms or not. But looking into Austin’s social media, he still has pictures of them together so, their separation might have been amicable.

Chapters Closed & Onto The Next One

It didn’t take much time for Corinne Foxx to delete all the related pictures of her previous relationship from her social media. Similar to that, in 2018, the Foxx Tales founder started dating Joe Hooten.

Unlike Austin Lantero, Joe Hooten is has worked in the showbiz business. Corinne Foxx’s boyfriend, Joe, who was her classmate while studying at the University of Southern California has produced, directed, and wrote few short films. Nowadays, she often posts about her relationship with Joe and does not hesitate to show off her lover.

The Manager Of Range Media Partners Finally Moves On

As of 2021, Austin Lantero has finally moved on. Going through his social media, aside from family pictures and the ones with his ex-girlfriend, Lantero has posted an image of his better half.

Corinne Foxx’s ex-boyfriend is dating a girl named Danielle, with whom he enjoys traveling and tasting good wines. Since the couple seems to be dating just for some time now, there is not much information about their love life.

With how quickly it escalated, we can assume there to be some university drama since Corinne Foxx and her boyfriend, including her ex-lover, were all from the University of South California.

We wish the best for Corinne Foxx and her current boyfriend to live happily and the same for her ex-beau, Austin Lantero.