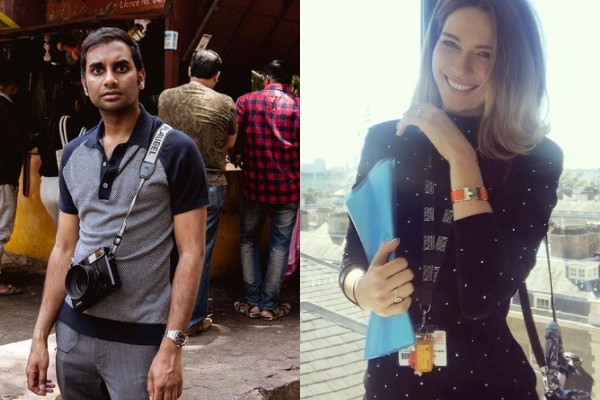 Aziz Ansari is a familiar name in Hollywood and is best known for his role as Tom Haverford in the NBC sitcom Parks and Recreation. The 37-year-old Indian-American actor is the main person behind the success of his series Master of None. Aziz has won various awards, including an Emmy, a Golden Globe, and also has a Grammy Awards nomination.

Apart from his success in TV and movies, Aziz is also avidly popular for his relationships. The Parks and Recreation actor was in a relationship with Courtney McBroom for around three years before breaking up with her in 2016. Aziz’s lovelife remained pretty low-key after his break up with Courtney, but the actor was seen back in action from 2018. Aziz is currently in a relationship with Serena Skov Campbell, so let’ have a look at how it all began for the pair.

How Did Aziz Ansari And Serena Skov Campbell Meet?

Aziz Ansari and Serena Sakov Campbell were first seen together in the streets of New York. The couple seemed pretty close to each other, which made fans curious who might Serena be. As for how they first met, there is not much known about it. Aziz remains pretty secretive about his relationship, and Serena also likes privacy and made her Instagram account private after she was mentioned in Ansari’s stand up.

Serena and Aziz started dating in 2018, and the two have already traveled quite a lot around the world. Even though we do not exactly know how it all really started, we do know the pair is immensely in love with each other.

Aziz Ansari’s partner, Serena Campbell, is a Danish physicist. Serena completed her Ph.D. in physics from King’s College, located in London. The 31-year-old specializes in plasmonics, which is the study of electromagnetic fields. According to her Linkedin, she is currently working at PwC in London as an Investigative Analytic in the forensics department.

Aziz Ansari’s girlfriend, Serena, completed her master’s in physics from The University of Manchester back in 2014 before joining King’s College for her Ph.D. Serena is sure an intellectual genius who seems to have found her perfect match in Aziz.

The Couple Were Seen Having A Good Time At Spain

Serena and Aziz spend quite a lot of time together, and one of the moments they shared in Spain was caught by the paparazzi. The couple was seen spending quality time on the island of Formentera of Spain. The couple shared some intimate moments together as Aziz couldn’t stop kissing and cozying up with his scientist girlfriend.

The vacation must have been quite refreshing for the couple who have their hands full during the working days. Aziz and Serena seem to be madly in love with each other, and let’s hope they stay like that for many more years to come.

The talented actor, Aziz Ansari might be pretty close to marrying his girlfriend than you might think. The 37-year-old actor spent his quarantine with Serena in London and also took her to meet his grandmother back in India a few years ago. The couple also went to Denmark to meet Serena’s parents, and this is clearly a gesture when a couple is close to getting married. We may very well see Serena evolving from being Aziz Ansari’s girlfriend to his wife.

Well, Aziz’s last relationship did not go as planned, and he ended up having a breakup when on the verge of getting married but this time around, let’s hope everything goes well for the couple.