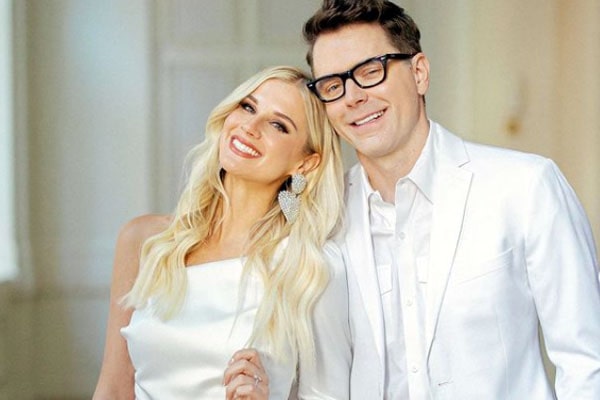 Bobby Bones is a well-known American radio and television host, notable for hosting the country music show, The Bobby Bones Show. He is also a full-time mentor on the singing competition TV series American Idol. Besides, Bones is the winner of season 27 of Dancing with the Stars, where his partner was Sharna Burgess. Moreover, Bobby Bones is also an author who has written two New York Times bestsellers.

The 41-year-old television personality Bobby Bones was romantically linked with a couple of famous ladies, including Lindsay Ell, Rachel Reinert, and Kelly Henderson, in the past. But, he did not marry any of them. However, it seems like he will tie the marital knot soon as he recently got engaged with his long-time girlfriend, Caitlin Parker.

Engaged To Bobby Bones Since October 2020

Bobby Bones, the radio host, popped the question to his girlfriend, Caitlin Parker, with an engagement ring on 11 October 2020. He used his color-blindness as a tactic to surprise his love, Parker, with a sweet proposal.

On a faithful night, Bobby Bones proposed his long-time beau, Caitlin Parker, inside the barn they were renovating on their Nashville property. Bones explained about his romantic moment with Parker on an episode of his show the next day. According to Bones, he worked for almost a month on the proposal without letting his to-be wife know about it.

While recapping his proposal setup, Bones revealed that he told Parker to go with him to sign off on some paint color options in the barn as he’s admittedly color-blind. He added that there were no paint colors as his friend had decorated the barn while the pair were out for the weekend. To ensure Parker was dressed up well for their romantic moment, Bones told her that they would be going for dinner after deciding on their color swatches. And, as soon as he opened the door, he got his expected response from his girl.

Bobby Bones’ surprise proposal to Caitlin Parker in their Nashville home included a special performance of the song ‘Nothing Left To Lose’ by singer Mat Kearney. According to Bobby Bones’ fiancée, Caitlin, it was at Kearney’s concert, while he was singing the same song, she realized Bones was the one for her. Both of them felt so lucky as Kearney played it again for them that night.

Bobby Bones Feels Luckiest To Have Caitlin In His Life

Besides explaining his engagement on his show, Bobby Bones announced his engagement with Caitlin Parker via his Instagram page. He shared a string of photos of that day and captioned the post, saying he is the luckiest, and his long wait had paid off. Bones expressed his happiness of getting married to the love of his life from the same post.

On her Instagram feed, Bobby Bones’ to-be-wife, Caitlin Parker, also shared her own special post to her soon-to-be-husband. She captioned her post, saying that she is marrying the best man she has ever known and feels herself like the luckiest girl in the world. Parker also exhibited her happiness for being in love with Bones and mentioned herself as future Caitlin Estell in the same post. Estell is Bones’ real last name.

Furthermore, some days later, Caitlin even posted the full video of her engagement with Bobby Bones on her Instagram page. Ever since their engagement, both Parker and Bones are busy planning their wedding. Probably, their fans need to wait some more time to see their wedding due to the COVID-19 pandemic. We pray that this pandemic ends soon and everything goes back to normal so that this beautiful duo can take their wedding vows in front of their close ones.

Bobby Bones’ fiancee, Caitlin Parker, is a social media influencer with nearly 250K followers on her Instagram, where she often posts snaps of her daily life. Besides, she has a YouTube channel named Unfancy Cooking, in which she uploads videos of her cooking recipes. Her YouTube channel has more than 12K subscribers, and each of its videos has over 10K views at the moment.

Caitlin Parker regularly shares snaps with her fiancee, Bobby Bones, and their two dogs on her Instagram. Going through both Bones’ and Parker’s Instagram pages, we can see that the couple loves to go for adventures during their free time.

Recently, the pair participated in survivalist Bear Gryll‘s show ‘Running Wild with Bear Grylls,’ which will air on 17 May 2021 on National Geographic Channel. Similarly, some weeks ago, Bobby and his wife-to-be did a skyline ride in Nashville, Tennesse. They also often fly together to different parts of the United States and out of the nation for refreshment from their works.

Bobby Bones and his bride-to-be, Caitlin Parker, are very much in love with one another. Seeing their chemistry, it looks like they will also be one of the soundest and most long-lasting couples in the celeb world.