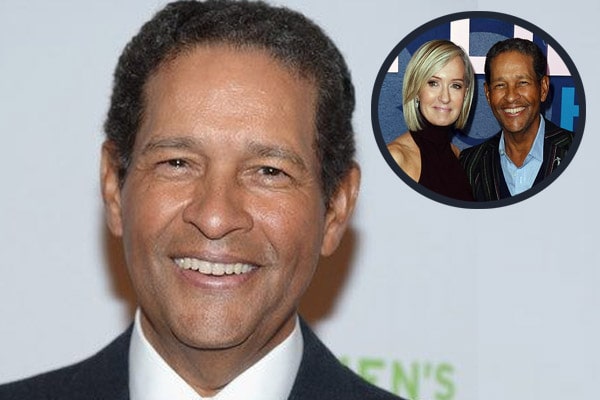 Aforementioned, Bryant Gumbel was in a marital relationship with June Baranco from 1973 to 2001. Some months after the finalization of Bryant Gumbel’s divorce with June Baranco, Gumbel proposed his long-time girlfriend, Hilary Quinlan with an engagement ring. The couple tied their marital knot later, in August 2002, in a small ceremony with around 25 guests.

Before marrying the host, Bryant Gumbel’s wife was working as a model in NYC. The former CBS Early Show host, Bryant, and the former Goldman Sachs researcher, Hilary’s wedding happened at the Breakers Hotel in Florida. The guests included Bryant’s fellow host Matt Lauer and his son from a former marriage, Bradley Christopher Gumbel.

The happily married couple, Bryant and Hilary, are contented with their marital life. The husband-wife duo often appears in the public events together. However, they are mute on the social media pages. Be that as it may, Bryant seems to be committed to his current wife, Hilary Quinlan. There are no rumors of this love-birds having any marital issues to date, and all of Bryant’s fans hope his present marriage will last forever.

Before getting hitched with Hilary Quinlan, Bryant was already married. The former couple took the wedding vows in 1973 among their family members and close friends. The now-estranged couple, Gumbel and Baranco, shared a great bonding for almost 28 years. However, with increasing time, the love and care between the former couple began getting cold.

In 2000, Gumbel’s then-wife, Baranco, accused him of being a “serial adulterer,” claiming that Gumbel started dating another woman, Hilary Quinlan, Gumbel’s present wife. She added her then-husband, Bryant, had other extra-marital affairs too. However, the TV host, Bryant, denied some of her allegations but accepted that he started a romantic relationship with Hilary after he left home some years ago.

Eventually, Bryant and June ended their 28 years long marriage with a divorce in 2001. Bryant Gumbel’s ex-wife got their Upper East Side apartment and even the Westchester house. Moreover, Baranco allegedly received half of Bryant’s fortune in the divorce settlement.

It has been almost two decades since Bryant tied his marital knot to his wife, Hilary Quinlan. And probably they might have plans to have a child together. But, to date, Bryant Gumbel has not welcomed a kid with his long-time spouse, Hilary Quinlan.

However, after marrying Bryant, Hilary got to be the step-mom to Bryant’s gorgeous kids from his ex-wife, June Baranco. Hilary’s step-son, Bradley Christopher Gumbel, was born in 1978, and step-daughter, Jillian Beth Gumbel, got added in the Gumbel family in 1984. Both, Jillian and Bradley are married and living with their spouse and kids in the present.

Although both kids stayed with their mother after Bryant and June’s official separation, they are very close to their step-mom. Both of Hilary’s step-children visit her and their dad, sometimes during their holidays and free times.

Though Bryant Gumbel’s wife Hilary could not give birth to Bryant’s child, Bryant’s love for her has not become less. The spark in their marriage is still the same as it was before their wedding.