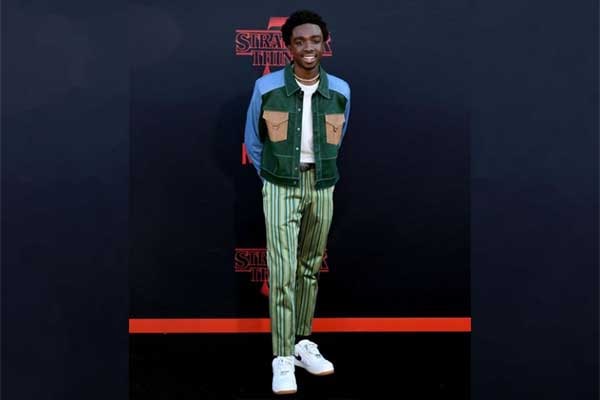 If a sci-fi with horror element is your jam, then you must have certainly watched the Netflix series Stranger Things. It presents an investigative storyline with a combination of supernatural events and psychic abilities. And Caleb McLaughlin played one of the protagonists of the series.

The actor portrays Lucas Sinclair, who plays an integral part in unraveling the show’s plot. His transition from a suspicious character to opening up to others is exciting to watch. Moreover, his portrayal of realistic emotional scenes is memorable for any fan.

The performer also has a romantic interest in the series. But what about in real life; is he seeing anyone at present? Similarly, questions related to Caleb McLaughlin’s girlfriend are nothing new.

So, let’s unfold the details of McLaughlin’s love life in this article.

Was Rumored To Be Dating Co-Star Sadie Sink

As mentioned earlier, Caleb’s character in Stranger Things becomes romantically involved with another character Max Mayfield. The latter chose him over his friend in the show. Furthermore, the audience loves the on-screen couple’s chemistry.

It’s nothing new for fans to ship their idols, and a similar case was for McLaughlin and his co-star. His amazing chemistry with Sadie Sink, who portrays Max, looked so realistic many people shipped them from the beginning.

The co-workers had known each other before joining Stranger Things cast. Both first met on Broadway when Caleb was in The Lion King, and Sadie was starring in Annie. Moreover, the on-screen pair hung out in Broadway Park after their rehearsals. Both have also shared how they value their friendship significantly, and it is something special.

After starring in the Netflix series together, the Stranger Things stars rumors of dating began to arise. Both had shared their first kiss on-screen and in real life together in the series. Furthermore, the friends occasionally share pictures of each other on social media, further fueling the dating speculations.

However, the performers have stated they are only friends in reality. Both have also not revealed whether they ever dated each other in the media. Still, it hasn’t stopped fans from assuming that Sadie is Caleb McLaughlin’s girlfriend.

Whatever the case is, we have to respect the Netflix stars’ decisions and not infringe on their privacy.

Who Is Caleb McLaughlin’s Girlfriend?

The actor started his career on Broadway before moving up to the big screen. His devotion and acting skills have won the hearts of many people. Similarly, the fans are curious to know if Caleb McLaughlin is dating anyone.

Well, the television personality likes to keep his love life private. So he hasn’t opened up about whether he is seeing anyone at present. Aside from Sadie Sink, he hasn’t been rumored to be paired with other actresses.

So, Caleb McLaughlin’s girlfriend is still a mystery among his fans. He is likely single, considering fewer details of his relationship. But even if he is dating, he is doing an excellent job hiding it from the media.

Caleb Is Focused On His Career

Although McLaughlin’s love life is an undisclosed matter, his acting journey is an open book. He had starred on many television series before getting his big break with Stranger Things in 2016. Moreover, he has remained a recurring cast in the series for the last three seasons.

The film star is also starring in the drama’s fourth season, which will be released in mid-2022. He has also earned several awards and a hefty amount from the series. For instance, Caleb’s earnings amount to $2.25 million for the fourth season.

Aside from that, the actor is showing progress in the music industry. He has previously appeared on Sia‘s music video and Jimmy Fallon‘s 2017 Golden Globes Opening. Finally, he released his first single Neighborhood in November 2021.

Caleb’s song is available on YouTube, Deezer, Spotify, and Apple Music. He is now busy with music promotions and recordings. He will likely release more songs and possibly an album in the future.

Likewise, the singer is occupied with his upcoming film projects. In addition to Stranger Things, he will be doing voice acting for the T.V. series Warriors airing in 2023.

Thus, Caleb McLaughlin likely doesn’t have time to be involved in a relationship. He is busy with his hectic schedules and still has a long way to go. Hopefully, we will see him dating someone soon in the days ahead.