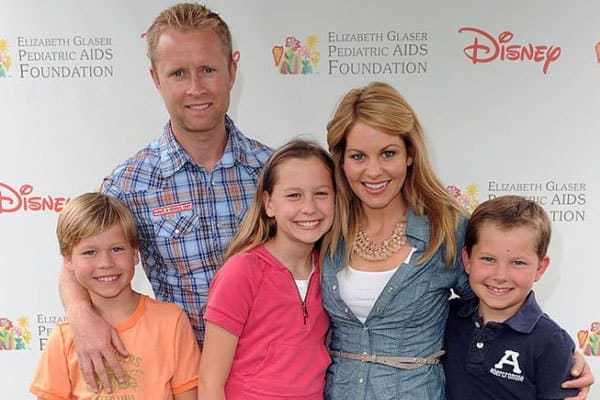 American actress, author, and television personality Candace Cameron Bure has been married to Russian-American ice-hockey player Valeri Bure for 22 years now. Married way back in 1996, the couple have been together ever since and the love between them is flourishing continuously over the years. The couple’s love has been enhanced by their children as the two gave birth to three children together.

Candace and Valeri first met in 1995 during a charity hockey game. Candace immediately felt attracted to Valeri, who looked very charming with his nice blond hair. Candace’s friend Dave Coulier introduced the two and things went forward very quickly indeed. Candace and Valeri went on a date the very next day and the rest, as they say, is history.

After seeing each other regularly from that day onwards, the two decided to get engaged the very next year. The two, completely in love with each other, got married on July 22, 1996, and 22 years down the line, their relationship is still as strong as ever. With the birth of their 3 kids, their love has transmitted to their children and their family is complete.

During the 22 years of their marriage, the couple has been through their fair share of ups and downs over the years. Candace mentioned in an interview that the couple has had a few low years but have stuck together and persevered through the years. ” We love each other through the problems.”, she said, proving that love conquers all.

Candace and Valeri’s romance has been enhanced by the birth of their children. The couple gave birth to as many as three children. Their first child was a daughter named Natalya who was born in 1998. This was followed by two sons, Lev and Maxim, in 2000 and 2002 respectively, completing the family.

Of the couple’s three kids, their daughter Natasha has found a great deal of success in the mainstream media through her singing and modeling gigs. She has walked up the ramp at the LA Fashion Week and has also appeared in the reality singing show The Voice. She has the talent to become a major star in the future.

Candace and Valeri have a good life together and along with their children, have a perfect family. Valeri became an American citizen in 2001 to live with his family and he has made sure to give all his attention to his family, even retiring in 2005 from hockey. Valeri and Candace have a 22-year long marriage and their love is as strong as ever.