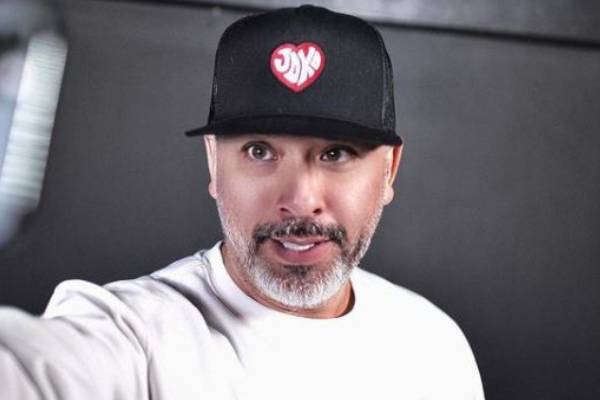 Comedian Jo Koy, born Joseph Glenn Herbert, has been involved in the industry since the late 1980s. He has found much fame due to his amazing comedic skills and acting talents.

Koy is best known for his stand-up shows and comedy specials on Netflix, which have been a big hit among his fans. Moreover, they are also eager to know more about the stand-up comic’s personal life.

So who is Jo Koy’s wife? Find out the answer in this article and also learn about his love life.

Also Read: Find Out Who Is Kiki Layne’s Boyfriend

Was Married To Angie King

Everybody’s favorite stand-up comedian, Jo Koy, was once married to the black-haired beauty Angie King. Like Jo, his ex-wife, Angie, is also involved in the entertainment business. However, she is an artist and musician who performs under the name Nura Luca.

The former couple were together during the early years of their career and supported each other through their struggles. It is unclear when and where the ex-pair met and how long they were married. But despite their failed relationship, Jo Koy’s ex-wife, Angie, is one of his biggest supporters.

Furthermore, the ex-couple welcomed a son together. Therefore, after separating, Jo and Angie co-parented and still share a close bond with one another. Moreover, Koy’s former spouse calls him her best friend and the best baby daddy in the world.

Welcomed A Son With His Ex-wife, Angie

Aforementioned, Jo Koy was previously married to artist Angie King for some years. In their years of togetherness, the former couple welcomed a child together. Jo Koy’s ex-wife, Angie, gave birth to their son, Joseph Herbert Jr., on April 21, 2003.

Jo Koy’s son, Joseph, has grown up and celebrated his 18th birthday in April. The blended family can be seen enjoying their holidays together and going on numerous vacations.

Furthermore, Jo Koy’s biggest inspiration is his son Joseph, and he does not hesitate to introduce him to his audiences. Joseph Herbert has accompanied his father to many of his stand-up shows and also appeared in his comedy specials.

Young Joseph is undoubtedly the apple of his parent’s eyes. Both Jo Koy and his ex-spouse, Angie, are very proud of their son, which can be seen all over their social media pages.

Who Is Jo Koy’s Wife Now?

Aforementioned, the American comedian has been married once and even welcomed a child together with his ex-wife. However, the information about who Jo Koy’s wife is now is scarce.

Unlike many entertainers, Jo Koy seems to have focused on raising his kid after his divorce rather than starting a new relationship. Instead, Koy seems to have dedicated his time to provide stability to his son and furthering his career.

Moreover, while Jo had been linked with several beautiful women in the past, he has not confirmed any of his relationships. Koy has kept much of his personal life far from the media storm and prefers to be quiet about his love life.

However, Koy can be pictured with famous personalities like Chelsea Handler, Tiffany Haddish, and other comedians he has collaborated with over the years. The stand-up comic shares a close bond with them and features them on his Instagram often.

Despite his wish for privacy, the comedian of Filipino-American descent has not avoided relationship rumors. He has been linked to actress Tia Carrere and also rumored to be engaged to Amy Bray at one point.

Neither of these beautiful and talented women is Jo Koy’s wife and have ever opened up about the rumors. Moreover, Jo himself refrains from shedding light on his love life.

Therefore, it might be a while before we find out the truth about Koy’s relationship history.