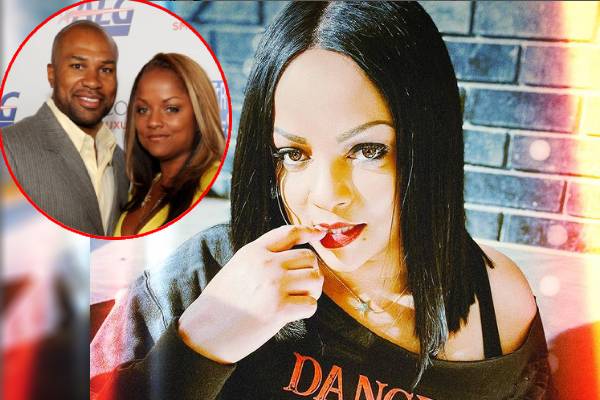 Born Derek Lamar Fisher, Derek Fisher is an American Basketball coach and a former player who won the NBA Championship five times. His playing career evolved into coaching when he joined the New York Knicks as their head coach in 2014. After serving the team for four years, he joined Los Angeles Sparks in 2019 and is still working there.

Apart from being an extraordinary coach and player, Derek is a family man and has been married twice. He also has four children. The head coach married Candace Fisher, a very long ago, and both were living happily together before falling short of their ever-increasing love.

Let’s go through the dynamics of their relationship and learn more about Derek Fisher’s ex-wife.

Derek Fisher married Candace, on 19 February 2005, and the couple was together for a decade. The coach and his ex-spouse have four children, Drew Fisher and Tatum Fisher (twins), Chloe Fisher, and Marshall Fisher, aka Marshall Faulk Jr.

Derek Fisher’s ex-wife and he had been together for so long, and their relationship seemed solid. However, it turned out to be just an illusion when the famous coach filed for the divorce from his then-wife in March 2015, citing irreconcilable differences.

Their Daughter Had A Rare Eye Cancer

Candace and Derek Fisher’s daughter, Tatum, was diagnosed with a degenerative and rare form of eye cancer, retinoblastoma. In 2007, the head coach’s daughter went through an emergency three-hour surgery and chemotherapy at a New York hospital.

On 02 July 2007, the former New York Knicks head coach requested a release from his contract so he could relocate to help fight his daughter’s condition. Thankfully, Tatum has recovered from cancer.

In addition to that, the former couple also agreed to destroy the embryos they had frozen at a California reproductive center during their marriage. So hopefully, the divorce was the best decision for all family members.

The former player was happily dating a reality star and actress, Gloria Govan, while finalizing the divorce from his spouse of eleven years, Candace. After the divorce settlement, he and Gloria dated each other and got married soon after. Derek Fisher lives currently lives with his wife, Gloria Govan, and their children.

In October 2015, the head coach was entangled in a physical altercation with his former teammate and ex-husband of Gloria, Matt Barnes, at a party. The incident interrupted the sweet time between Derek and Gloria.

Regardless, the lovebirds got engaged in April 2018. After three years of their engagement, the couple walked down the aisle in July 2021. In an interview with People, the lovely pair expressed their excitement and happiness for their new journey together. We wish a lasting bond for the couple.

So has Candace Fisher also moved on? Well, she hasn’t opened up much about her love life. But, she seems happy living with her children going through her Instagram posts.

Nonetheless, we assume Derek Fisher’s ex-wife is receiving the spousal and child support she was promised to get. We wish her a happy and prosperous life ahead.