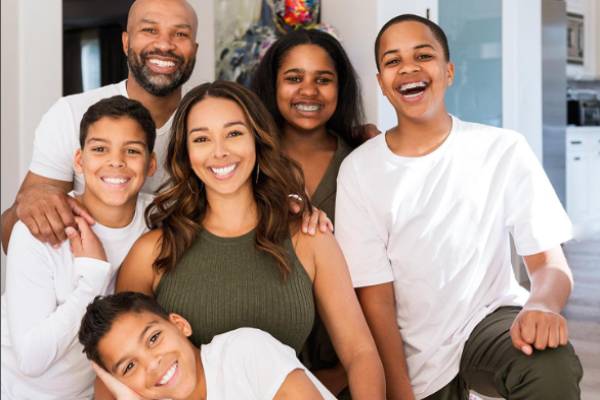 Born Derek Lamar Fisher, Derek Fisher is a famous American Basketball coach and a former player. He is a five-time winner of the NBA Championship. The former player advanced to coaching after joining the NBA team New York Knicks as their head coach in 2014. After working with the Knicks for four years, he started his journey with Los Angeles Sparks in 2019 and is still serving the team.

Besides his glorious career in the league, Derek is a devoted family man. He is blissfully married to his current wife, Gloria Govan. Also, he is a proud father of his kids. Thus, in today’s article, let’s get to know all of Derek Fisher’s children.

A Doting Father To His Kids

As aforementioned, Derek is happily wedded to his long-time girlfriend, Gloria Govan. She is an American Television star and presenter. Before exchanging the wedding vows with his current spouse, the head coach was married to his ex-wife, Candace Fisher, from 2005 to 2016. Likewise, Derek Fisher’s wife, Govan, was also married to a former NBA player, Matt Barnes.

For a decade, Derek and Candace were together, and they have two children. Tatum Fisher and Drew Fisher are twins and were born in June 2006. Prior to the bond with his ex-wife, the head coach had a daughter, Chloe Fisher, who now lives with her mother.

On the other hand, Derek Fisher’s wife, Gloria Govan, also has two sons (twins), Carter Kelly Barnes and Isaiah Michael Barnes, from her previous marriage. They were born in 2008. Additionally, Gloria has 50-50 custody of her twin boys with her baby daddy.

Moreover, Derek currently lives with his partner and kids. Considering his financial success, Derek Fisher’s children must be enjoying a comfortable life.

Candace and Derek Fisher’s daughter, Tatum Fisher, was just 11-month-old when she was diagnosed with a degenerative and rare form of eye cancer, Retinoblastoma. She went through an emergency three-hour surgery and chemotherapy at a hospital in New York.

When Tatum was just starting to crawl, her mother noticed she had trouble with her balance. Not only that but there was also an unusual fluorescent glow in her left eye. Afterward, her parents took her to their pediatrician, who referred her to a specialist.

The specialist’s diagnosis shocked the former couple as they were told their baby girl had just 10% of her vision in her left eye and had eye cancer. The recommended treatment was the removal of her eye.

Candace and Derek found a doctor who specialized in intra-arterial chemotherapy. Soon after, the little girl underwent an operation that protected her eye. Afterward, the doctors had to monitor them until Tatum was 44 months old as she was still at high risk for tumors to form in both of her eyes.

At that time, Tatum’s dad was a player for the NBA team Utah Jazz. Thus, the former player appealed to be released from his contract so that he could relocate to New York and be there with his family.

Nonetheless, Derek Fisher’s daughter overcame her cancer with the unconditional support of him and his ex-partner. She is in her teenage years now and living with her dad and stepmother.

Derek Fisher’s Only Son Is Fond Of Basketball

Derek Fisher’s son, Drew Fisher, goes to Sierra Canyon High School in Chatsworth, California. He is in his sophomore year now and is an active student-athlete.

Drew is one of the significant players of the Sierra Canyon JV Basketball. He plays as a guard and wears a jersey no. 15. Moreover, his team has won many matches against other schools. Their last match was a non-conference game on 22 May 2021 against Chatsworth, which they won by a score of 64-61.

Drew Fisher seems to love basketball a lot. So, will he also turn professional like his dad? Nevertheless, let’s hope he will achieve great success in his playing career.

Spends Quality Time With His Step-Sons

Although Derek Fisher’s wife, Gloria, doesn’t have full custody of her sons, she makes up for whatever time she has with them. The coach also seems to have a close bond with his step-sons. He often shares family photos that include his two stepchildren, Carter Kelly and Isaiah Michael, identical twins.

Isaiah is a basketball player who attends the Simeon High School in Chicago. At the same time, his twin brother is an Instagram star.

Nonetheless, all of Derek Fisher’s children have grown up and are living happily. We wish them prosperous life ahead.

The name Chloe has a Greek origin, and it means Blooming and Fertility.

The name Tatum has an Old English origin, and it means A Cheerful Bringer of Joy.

A boy name Drew is of Welsh origin, which means Wise.

Isaiah is a Hebrew word that means God Saves, while Michael is a Hebrew name meaning Gift from God.