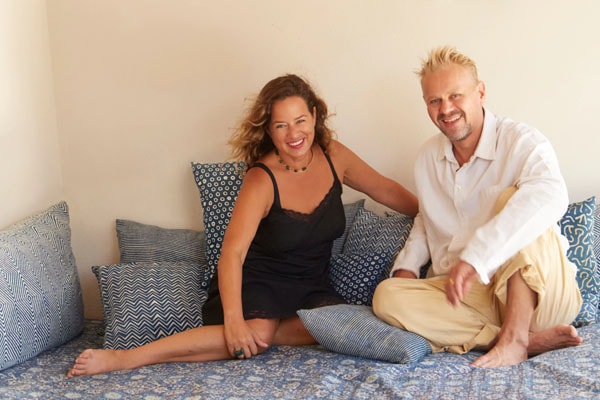 Apart from his son Ray Emmanuel, Adrian’s wife Jade has got two beautiful daughters named Assisi Lola Jackson and Amba Isis Jackson from her previous relationship with ex-boyfriend Piers Jackson. Jade Jagger’s husband, Adrian Fillary is a man with multiple talents; he is a DJ, a festival promoter, graphic designer and an art director.

As stated earlier, DJ Adrian Fillary and his beautiful wife Jade Jagger exchanged vows on June 30, 2012, at Cotswolds in Aynhoe Park hotel. The party was lit as it was surrounded by Jade’s showbiz family, rock royalty and model friends.

Adrian’s wife Jade Jagger designed her wedding dress. It was a laid-back creation with a low neckline, spaghetti straps and accessorized with crystal clasps. Many well-known names were present there during that day including Mick Jagger, Jerry Hall, Kate Moss, Elizabeth Jagger, and others.

To top it all off, the lead singer of The Rolling Stones, Mick Jagger or Jade Jagger’s father performed at the wedding.

Adrian Had A Difficult Life Before

DJ Adrian Fillary’s wife Jade whose full name is Jade Sheena Jezebel Jagger had a lavish life as she grew up in luxury properties. Jade Jagger’s husband Adrian lived in London riverside council flat and paid £120 ($153.42)-a-week for over 13 years. The flat is usually occupied by the needy.

Well, everything changed after Adrian married to Jade. His life is now changed, and he too lives a lavish life now. They have bought a lot of properties together which include a traditional British house in Gloucestershire.

After being married for over two years, Adrian and wife Jade welcomed a son named Ray Emmanuel Fillary on 12 June of 2014. The little Ray Emmanuel has got a blonde hair like his father Adrian and looks like a mini-version of him.