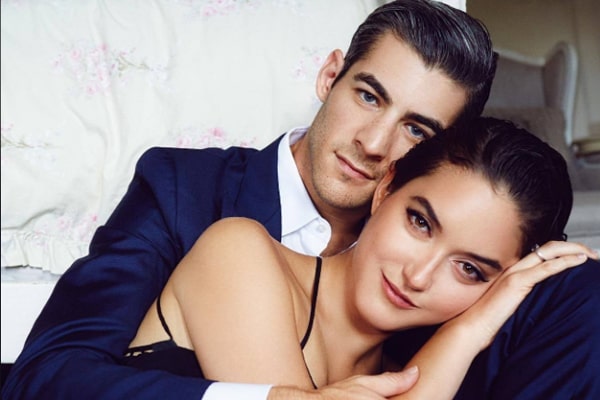 When we hear ‘Baldwin,’ fashion model Hailey Baldwin aka Hailey Rhodes Bieber and actor Alec Baldwin, ring the bell. However, everyone in the family has an extensive career to celebrate for and among them is Stephen Baldwin‘s eldest daughter, Alaia Baldwin.

The fashion model and advocate, Alaia, has made a remarkable name in her respective career, like her younger sister, Hailey. Furthermore, the Baldwin sisters are attuned to the media scrutiny; thus, they are versed in differentiating their personal and professional life. As for today, we will be tailing Alaia Baldwin’s happy bubble, i.e., her marriage and her husband.

Since the Baldwin family is pretty much out and about their entire life, it is somewhat weird for their son-in-law to be secretive. But yeah, Alaia Baldwin’s husband, Andrew Aronow, is pretty secretive and does not want you to find out about his details.

Aronow’s Instagram is private with very few followers, and his Facebook has been inactive since September 2017. Or his posts might not be public at all. Despite the secrecy, Alaia’s partner seems to be doing pretty well, earning life for himself and his family.

Although Andrew Aronow is away from the public scrutiny, his wife, Alaia, posts enough PDAs to fill her fan’s curiosity.

Andrew Aronow Is A Producer

Andrew Aronow is the founder of Absolute Zero Productions. The company was founded in 2013 and encompassed the creative development, production, marketing, and distribution of omnichannel experiences.

Throughout the years, Andrew Aronow grew considerably in the film making industry. Andrew Aronow’s IMDb account also credits him for Iconoclasts as a production assistant and has a credit for Fandom as a writer as well.

Before initiating a career as a producer, Alaia Baldwin’s husband served as a Legislative Correspondent for U.S. Congressman, John Dingell. While working in D.C., he published several op-eds and collaborated on countless speeches for the Congressman. After spending a couple of years in Washington, he flew to New York and set his foot in the filmmaking world.

It is a blessing to marry your best friend, and Stephen Baldwin‘s eldest daughter was very fortunate in this case. Andrew and Alaia shared their vows on September 2, 2017, at Blue Hill restaurant at Stone Barns in Westchester County.

Their wedding was grand. Alaia and Andrew shared their vows in a beautiful ceremony in New York while Hailey Baldwin served as her maid of honor, and Ireland Baldwin was a bridesmaid.

While Mr. Aronow was spruced in a black suit and sleek tie Mrs. Aronow looked heavenly in an elaborate strapless white gown and long tulle veil.

The couple married after three years of being together and are still enjoying their marital bliss. Andrew Aronow’s wife shares a lot of their pictures, either lounging or partying. After three years into marriage, the pair is finally marching towards parenthood.

Announced Their First Pregnancy in April

Aforementioned, Mrs. Aronow is preparing to shake the world with a star baby in 2020. Justin Bieber‘s wife, Hailey, is more than excited to be an aunty while Alaia Baldwin’s husband is over the horizon with the good news.

Alaia announced her pregnancy via Instagram on April 18, 2020, featuring a photograph of her handsome beau kissing her adorable baby bump. Furthermore, she spiced up the special announcement captioning the arrival of baby Aronow in August.

Aunty-to-be, Hailey Baldwin Bieber is beyond excited to welcome her nephew/niece while she is waiting to start her own family with Yummy singer, Justin Bieber.

Welcomed A Baby Girl In August

Alaia Baldwin and Andrew welcomed their first baby on August 17, 2020. They announced the birth of their daughter, Iris Elle Aronow, on Instagram with great affection and thanking their doctor for making the experience smooth.

Furthermore, Hailey joined the excitement via her Instagram story.

Although Alaia Baldwin’s husband is away from social media, we can only imagine his excitement to embark on their new journey. But let’s hope the future holds surprises and better days for the young couple.