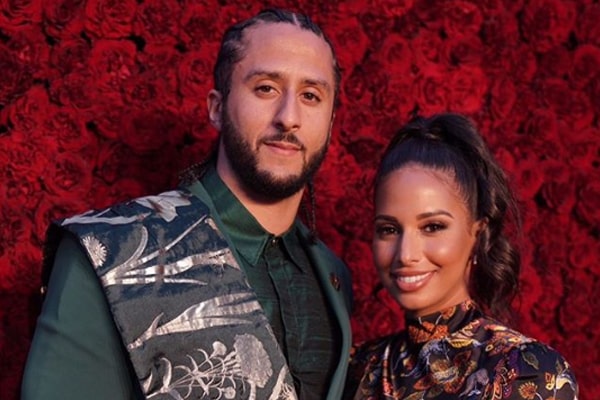 Fame has two sides of it. Frankly, it allows you to have the best time of your life and confront your success. Diversly, you will have to keep your eyes open, not to let outsiders peek in your privacy.

However, privacy is a foreign word for fans and paparazzi, especially when both individuals are famous. Similar is the case with Colin Kaepernick and his girlfriend, Nessa. The couple has been under public eyes since 2015 and is enjoying a happy relationship along with their successful career.

Footballer Colin Kaepernick’s girlfriend, Nessa Diab, was born on May 6, 1981. She was raised a Muslim by her Middle Eastern mother and Egyptian father. Diab grew up along with her two brothers and traveled back and forth from the USA to the Middle East.

Furthermore, Nessa’s father’s work took the family to Saudi Arabia during her youths. Her youth in the Arab was not an ordinary life.

Kaepernick’s partner, Nessa, revealed that she, as a young girl, feared for her life. She further told about wearing gas masks to school and hearing war sirens constantly.

Upon returning to the States, Nessa got a B.A. in Mass Communication from Berkeley at the age of 20. Likewise, she used to remix songs and even had one of her remixes played on air before she was officially on the radio.

Growing up in difficult circumstances shaped her activism. While writing about the wrongful shooting of Alton Sterlin in 2016, Kaepernick’s girlfriend, Nessa, said that her parents were refused jobs because of their accent.

As of now, Nessa Diab is a voice for all the Islam and vulnerable communities. Because she is never scared of putting her mind into words, she gets into trouble. But the badass woman gives nothing about the consequences and stand up for what she believes.

Road To Radio and Television Personality

Nessa Diam is a hard-working person who works tirelessly for her dreams. While in college, she interned at San Fransisco Bay Area Top 40 station, Wild 94.4. Furthermore, she eventually got her show called The Baydestrian report, which covered the news in the Bay Area.

Diam’s notability rose as she started interviewing artists and celebrities on Wild 94.9 and YouTube, which subsequently led to MTV seeking her out to be on Girl Code. Furthermore, Nessa has hosted various MTV and MTV2 shows.

After MTV’s Girl Code, she was given a slot on New York City’s Hot97 radio station in 2015. Kaepernick’s girlfriend, Nessa, has also appeared on MTV2’s Charlamagne& Friends, Snooki, and J Woww After Shows, etc.

As of now, Nessa is working as a new host of NBC Universal’s show, Talk Stoop. She is at her career prime and relishing a comfortable life with her athlete boyfriend, Colin Kaepernick.

While earning life as a reputable radio and television personality, Nessa’s net worth is at $2 million by today. Let’s hope she continues to make more in the coming days.

Nessa and Kaepernick Began Dating In 2015

Kaepernick ‘s protest began gaining negative media attention in 2016. However, Nessa defended him, claiming that she was proud of him and will always be.

Before dating 49ers’ Kaepernick, Nessa dated Aldon Smith. According to TMZ, Kaepernick and Smith fought in the practice ground. The fight was rumored to be over Nessa. Smith was later cut from the 49er.

The couple flaunts their love on social media frankly. Let’s hope the couple shares their passion for eternity.

Colin Kaepernick’s girlfriend, Nessa, was always a very active socialist. But, together, they are a humanitarian couple. They both love people and want everyone to know their rights.

Therefore, with the purpose of enlightenment, the couple co-founded Know Your Rights Camp. The mission of this organization is to advance the liberation and well-being of Black and Brown communities through mass-mobilization, education, self-empowerment.

In June, the foundation stretched its reach with COVID-19 funds and the creation of a legal defense initiative for victims of police terrorism and civil rights violations.

Furthermore, Nessa hosts a yearly prom pamper party for underprivileged high school girls from New York City. Likewise, she mentors students from other organizations in NYC, including the Bronx.

Colin Kaepernick’s sweetheart prioritizes education and thus created a scholarship and mentorship program in 2018 at the Lower East Girls Club.

Nessa’s Boyfriend Was Rumored To Have Converted To Islam

In the world filled with envy, one needs to be full to experience the wholeness of life. Similar is for people to appreciate religion and their values.

However, many are not cultured to accept different values, and many question the moral of those who decide to change their religion—the worse case when you are a celebrity. In 2016, Nessa’s boyfriend, Colin Kaepernick, was obliged to address the rumors that claimed Nessa had converted him to Islam.

The civil rights activist, Colin Kaepernick, blamed the rumors on Islamaphobia. In an interview with Washington, he told that he has massive respect for the religion and knows a lot of Muslim people. He went on to talk about people’s feat and Islamaphobia prevailing in the country.

#49ers Colin Kaepernick says he has not converted to Islam, defends religion pic.twitter.com/EgUDw0PcLZ

He further went on to address the States president, Trump, and the growing Islamaphobia. He went on to talk about his girlfriend, their relationship, and his perspective/impact after dating a Muslim.

Colin further said that he respects people’s right to believe what they want to find, and nobody should be prosecuted for their beliefs. Kaepernick’s father, Rick Kaepernick, revealed that Colin is a religious child, but he is more about him and his feelings. Thus, he also has a bible verse tattoed on his arms.

No man can dictate another person’s belief. Therefore leave the man alone.

Kaepernick’s girlfriend, Nessa, is a spark plug. She is a whole package of talent, rebel, confidence, and many more. Let’s hope she stands still with her beliefs along with flexibility. Also, let’s hope the couple remains together for years to come and we hope to hear about the couple’s wedding very soon.