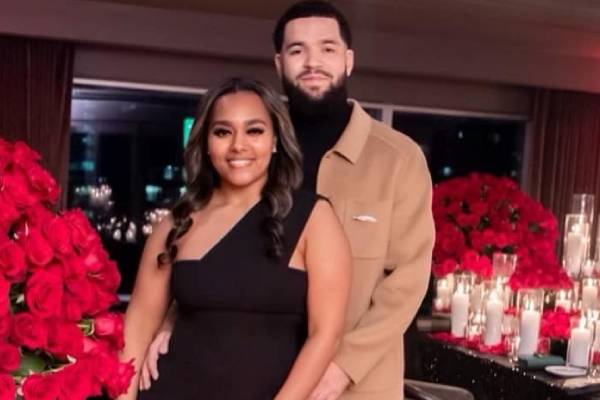 National Basketball Association (NBA) consists of 30 different teams, one of which is the Toronto Raptors. The Canadian professional basketball team has several players playing for it, and one such name is Fred VanVleet. With exemplary playing skills, Fred has been in the limelight for a very long time now.

The talented basketball player enjoys not only a successful professional career but also blissful family life. He has been dating Shontai Neal for a long time, and their relationship is still going strong. So, let’s know about their relationship timeline and learn more about Fred VanVleet’s girlfriend.

As mentioned earlier, the Toronto Raptors star Fred VanVleet is currently in a relationship with Shontai Neal. The couple has been dating since 2010. The basketball player and his girlfriend first met during their high school days.

Similarly, the sweethearts were inseparable, and after completing their studies, Fred VanVleet’s girlfriend followed him to Wichita State University. It has already been over 10 years since the lovebirds began their relationship and they are still going strong.

After twelve years of dating each other, Fred popped the question to the love of his life in February 2022. The engaged duo took to their social media accounts to share the news of the proposal. Fred VanVleet’s fiancee also posted pictures of the engagement night. She expressed how it felt surreal to be finally marrying her soulmate and best friend of twelve years.

Similarly, Shontai Neal’s fiance shared a picture of Neal with a ring on her finger and captioned it “FYM” with a series of love and fire emojis.

The engaged couple has not revealed when they will walk down the aisle. But who knows, both might be planning a beautiful and unforgettable wedding.

Fred VanVleet’s Girlfriend Is A Mother Of Two

As mentioned earlier, it has been over a decade since Fred and Shontai began dating. On top of that, the pair got engaged recently. Although the lovebirds are yet to tie the knot, they have already grown their family from two to four.

Fred VanVleet’s girlfriend has given birth to a son and a daughter. Shontai’s first child with her beau is their daughter, Sanaa Marie VanVleet, to whom she gave birth on January 29, 2018. Her fiance shared the news of the arrival of their baby girl on Twitter.

Similarly, on May 20, 2019, a year and a half after the birth of their daughter, Shontai gave birth to their son, Fred VanVleet Jr. She is raising both kids with immense love and care.

Also Read: Take A Look At The Marital Life of Nicholas Britell And Caitlin Sullivan

Shontai Is Fred’s Number One Supporter

The Raptors star has undoubtedly gained immense fame and fortune to his name. Likewise, he has also built a huge fan base worldwide. But amidst the crowd of his fans and supporters, one face that always shines is Fred VanVleet’s girlfriend, Shontai Neal.

The couple that met at high school are inseparable and have always been by each other’s sides. Shontai has supported her fiance throughout the ups and downs of his career. Even when the basketball player began playing for the Raptors, Shontai readily moved to the new city with him.

Although Shontai’s profession has not been revealed yet, Fred must be supporting her immensely. Because of the never-ending support and companionship, their love is still strong even a decade later.

Nevertheless, Shontai and Neal must be living a wonderful life together. Let’s hope the couple reveals the date of their marriage soon. Hopefully, their relationship will continue to thrive with the days passing.