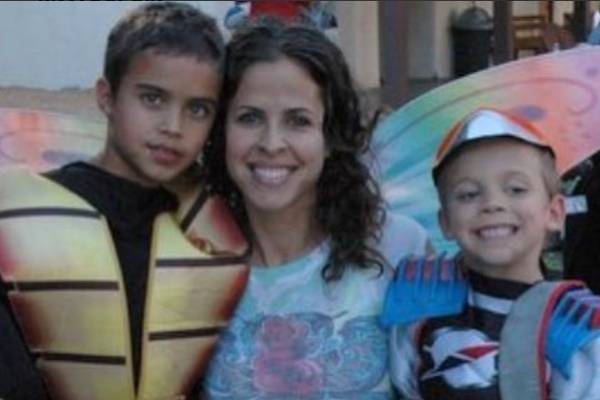 Lisa Jansen was brought into the spotlight after her marriage with Gabe Kapler. Image Source: Dane Kapler Instagram.

Gabriel Stefan Kapler is an American former baseball outfielder who played in minor and major leagues. After a successful playing career, Gabe Kapler went on to manage MLB teams. At present, he serves as the manager of the San Francisco Giants.

Much like Gabe’s professional career, his personal life has also received widespread coverage in the media. But, unfortunately, Kapler’s personal life has not been so pleasant. Gabe was previously married to Lisa Jansen for fourteen years. Moreover, the former pair are also parents of two.

As Jansen has remained away from the limelight following her divorce, many are curious about her whereabouts. So, let’s learn about Gabe Kapler’s ex-wife, Lisa Jansen. Moreover, let us also know the reasons behind their separation.

Gabe Kapler and Lisa Jansen started dating in their final year of high school. Even though they had been dating since their school days, the ex-couple married seven years later in 1999. Their marital relationship had its ups and downs, but they never gave up on each other in the earlier days.

For the most part, the former partners kept their relationship away from the media. Consequently, little is known about what went wrong between the ex-couple before they divorced in 2013. Furthermore, neither Gabe nor his former partner has spoken on the matter publicly.

While Lisa’s marriage did not last long, she did become the mother of two children from their union. Chase Ty Kapler, Gabe Kapler’s son, was born on October 8, 1999, the same year they married. Dane Rio Kapler, her second child, was born a year after Chase.

Still, when Gabe filed for divorce, he requested joint custody of their sons, and the ex-couple is now co-parenting their children. Similarly, Kapler and his wife are also on friendly terms and completely love and support each other.

However, Gabe Kapler’s ex-wife has disappeared from the spotlight after the divorce. As a result, information regarding whether or not Lisa ever remarried someone else remains unknown. Nonetheless, let us hope that she has found her life partner and is enjoying a pleasant life.

Things on the internet spread faster than wildfire, and there’s a reason why people shouldn’t believe everything they see on the internet. Often celebrities are the ones who are the target of such rumors, and unfortunately, the San Francisco Giants’ manager is no stranger to them.

Only a year after their divorce, rumors about Lisa Kapler’s ex-partner’s sexuality started blowing up. However, upon further inspection of why the accusations began, it was revealed that they were all sparked by the former baseballer’s tweet calling for LGBTQ+ rights.

I hope when the first actively gay baseball player comes out, he’s a superstar. We need a Jackie Robinson style earth shaker. #Change

Additionally, Gabe has not made any comments on the accusations, further fueling the allegations. Furthermore, the former athlete is very outspoken about supporting the LGBTQ+ community and has effectively leveraged his platform to spread the word.

Well, for the time being, Kapler’s ex-husband seems adamant about keeping his love life low-key. So, even if Kapler is gay, we might not be hearing about his lovers anytime soon.

Abused By Her Ex-Boyfriend In The Past

There are plenty of crazy abusive boyfriend stories out there that start as a harmless relationship and finish up as terrifying headline news. Unfortunately, many stay with their abusive partners for far longer than necessary, whether because of their fear or their “I can fix him” mentality.

Even though we’ve all heard a lot of abusive stories, nothing can prepare us for Lisa Jansen’s three-year nightmare with her abusive ex-boyfriend. Before dating Gabe, she dated a guy who happened to be three years older than her. While the beginning of her relationship was enjoyable, the violence began suddenly and unexpectedly.

Lisa’s ex-boyfriend, whose identity she opted not to reveal, beat, choked, and thrashed her regularly. He also once asked her whether she was ready to die while pointing a gun at her. Unfortunately, her ex beat her every time she fought back, so she gradually ended up as a victim of abuse.

Additionally, her friend and teachers turned a blind eye to the abuse taking place right before their eyes. As a result, the violence persisted. Despite this, Lisa chose to remain with her ex-partner because his father was dying and had pitied him.

However, Gabe Kapler’s ex-wife knew that her relationship had to end as the cycle of abuse continued for years. Fortunately, when his father died, he moved in with his aunt, and the pair finally broke up.

Towards the end of their senior year, Lisa Jansen started dating her then-boyfriend Gabe Kapler, a standout shortstop on the high school baseball team. As Gabe’s ex-partner leaped right into the relationship after leaving an abusive relationship, the beginning of their relationship was disastrous. Unfortunately, Lisa picked up the abusive behavior from her prior relationship and often fought and hit Gabe during arguments.

However, the former outfielder made it a point to inform Lisa that being violent was inappropriate, and he eventually helped her overcome her behavior and past trauma. In addition, as time passed, the couple founded the Gabe Kapler Foundation to help victims of abuse stop the violence by providing them with the resources they need to live self-sufficient, violence-free lives.

Unfortunately, their foundation’s website is now suspended; therefore, the foundation might not be running at the time. However, while the foundation may or may not be operational at the moment, it has certainly assisted many girls in escaping violent and toxic relationships.

Lisa Kapler’s ex-husband has worked for the benefit of several people. He is concerned about the issues of his country. In May 2022 after the unfortunate event of the elementary school shooting in Uvalde, Texas, he said to skip the national anthem until the direction of the nation changes. His decision was supported by several other managers.

At present, Gabe Kapler’s ex-partner works as intuitive health & compassion coach, so we wish her the best for her future.