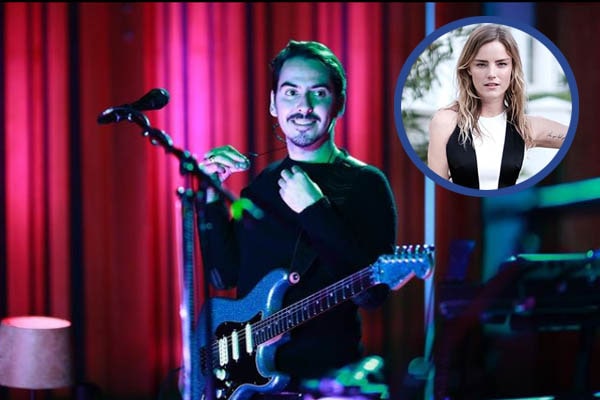 Dhani Harrison and Sólveig Káradóttir were married from 2012 to 2016. Image Source: Social Media.

It has already been twenty years since the author, singer, songwriter, guitarist, and actor George Harrison left this world. However, his only son Dhani Harrison is continuing his legacy as a musician. Currently, George Harrison’s son, Dhani, is an established British composer, musician, and songwriter ruling the world of music. The younger Harrison debuted as a professional musician from his father’s final album, Brainwashed. A year after his dad’s death, Dhani formed his own band, thenewno2, in 2002. To date, Harrison with his band has performed in several festivals and recorded numerous blockbuster albums.

The writer, and singer of title songs of several TV series, Dhani Harrison, is currently single. However, he was once in a marital relationship with the Icelandic neurologist and scientist Kari Stefansson‘s daughter, Solveig Karadottir, from 2012 to 2016. Here, meet the multi-millionaire musician Dhani Harrison’s ex-wife, Solveig Karadottir, and the reasons behind their separation.

Moreover, Paul McCartney’s daughter, Stella McCartney, designed David Harrison’s ex-wife, Solveig Karadottir’s wedding dress. The then-couple, Harrison and Karadottir, walked down the aisle to Led Zeppelin‘s song The Rain. Moreover, before heading for a honeymoon in Seychelles, and the Maldives, the newlywed, danced to a tune by the Beach Boys ‘ Don’t Talk; Put Your Head on My Shoulder.’

The former couple, Dhani Harrison and Solveig Karadottir got engaged in the January of the same year they married. Harrison and Karadottir did not delay their wedlock but officially separated soon within four years of living as husband and wife in 2016. The now-estranged husband-wife duo did not share any kids.

Reasons Behind The Divorce Of Harrison And Karadottir

Everything was going well in the marital life of Dhani Harrison and Sola Karadottir. There were no rumors of them having any type of marital issues while they were together. But, surprisingly, Dhani Harrison filed for a divorce with his then-wife, Solveig, in November 2016. He cited irreconcilable differences while filing the divorce petition in Los Angeles Court. Furthermore, TMZ magazine claimed that the cost of alimony and legal fees would be dictated by a prenup entered by both Harrison and Karadottir.

The former pair looked completely happy together while attending the red carpet events together when they were still married. Moreover, neither Harrison nor Karadottir have not been in a relationship publicly with any other person after their divorce. So, the exact reason behind their decision to go separate ways is still a mystery.

However, the public speculates that their different profession resulted in their separation. Like many other celebrities, Harrison might have failed to give his then-spouse, Sola, enough time due to his busy schedule. There might be several reasons behind their separation. But, the real divorce reason can be just revealed by Harrison and Karadottir only, which they haven’t to date.

Musician Dhani Harrison’s ex-wife, Solveig Karadottir, is a fashion designer based in London. Solveig is one of the founders and Creative Director of Galvan London, a clothing brand. Karadottir and three other women from the worlds of fashion and contemporary art, Carolyn Hodler, Katherine Holmgren, and Anna-Christin Haas, founded the label in 2014. Frustrated by the over-embellishment of evening wear, the four ladies instead design modern, clean, and cool gowns and jumpsuits. Also, they design laid-back, minimal bridalwear.

According to sources, besides being a talented fashion designer, Dhani Harrison’s ex-wife, Solveig Karadottir, is also a psychologist. Moreover, she worked as a model since her teenage years but later discontinued it for pursuing her career in other fields. Karadottir has modeled for various fashion magazines and agencies in the past, including Eskimo. However, her full focus is on her career as a fashion designer in the present. Currently, the beautiful former model, Solveig is single after separating from Dhani Harrison in 2016.