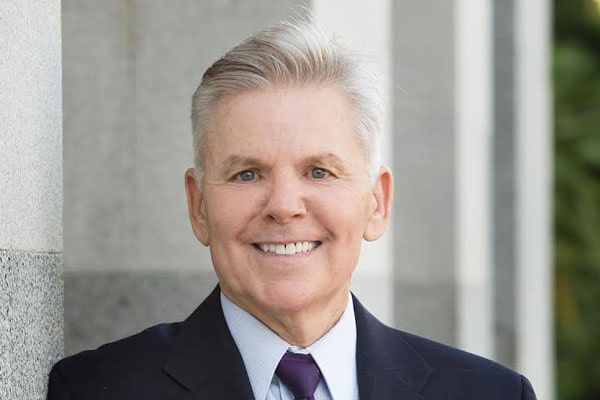 After the Chandra Levy scandal, both Gary Condit and his wife, Carolyn Berry rarely appears before the media. Image Source: Social Media.

Carolyn Berry is the wife of Gary Condit, an American former politician and an author. Her husband represented the 18th congressional district of California in the House of Representatives from 1989 to 2003. Before joining California State Assembly in 1982, Condit served as one of the board of supervisors of Stanislaus County from 1976 to 1982. Moreover, he also served as the mayor of Ceres city for two years, from 1974 to 1976.

Carolyn’s partner Condit was the youngest mayor in Ceres City’s history. He had become its mayor 25.

So, where is Gary Condit’s wife, Carolyn Berry, and what is she doing now? Find it out all here.

Carolyn Berry is from Tulsa, Oklahoma, where her husband, Gary Condit, completed his high-school education. She is the eldest among three Berry siblings and grew up in an upper-middle-class family. Berry’s dad was an owner of a discount designer clothing shop. So, she was regarded as one of the best-dressed, and popular girls in high school as her parents often used to gift her designer clothes.

Most of Carolyn Berry’s friends remember her as a traditional Southern girl of an earlier era. She was a fun-loving member of the Pep Club, devoid of career ambitions. According to her friends, the magnificently beautiful and kind, Carolyn did not need to do anything to encourage boys as they just fell in her wake. She could have had any boys she wanted in Tulsa.

But by her junior year, Carolyn fell for Gary Condit, who was neither a class officer nor a star athlete at their high school. However, he was a swashbuckling operator, who pushed the acceptable decorum standards, and whom girls chased.

The beautiful pair, Gary and Carolyn, dated throughout their junior year at Nathan. Later, Carolyn’s parents transferred her to another school to distance her from Gary. However, it did not keep the lovebirds from loving each other. After graduating from high school in 1966, Carolyn enrolled at the University of Tulsa. A year later, she drove to Ottawa County with Gary and exchanged their wedding vows in front of a justice of the peace.

Reportedly, Gary Condit inflated his age from 18 to 25 while registering his marriage, as at that time, men were required to be 21 to wed in Oklahoma without parental consent. They resided in a garage apartment in Tulsa for some years before relocating to Ceres.

The secretive married couple, Gary Condit and Carolyn Berry, are parents to two children, Chad Condit, and Cadee Condit Gray. Carolyn gave birth to Gary Condit’s son, Chad Condit, in the summer of 1967, when they were still in Tulsa. Similarly, their second child, Cadee, arrived some years later, shortly before they moved to Ceres, California, at Gary’s father’s request.

Both of their kids are grown-up now and finding success in their chosen career paths. Carolyn Berry’s children show immense interest in politics like their father. They have even run for congress a couple of times in the past. However, both of the Condit siblings did not succeed in achieving their aim.

According to the Linkedin profile of Gary Condit’s daughter with Carolyn, Cadee Condit Gray, she currently serves as a media & communications coordinator at IVC Media, LLC. She is in a marital relationship with the American Politician, Adam Gray.

Talking about Carolyn and Gary Condit’s son, Chad Condit, his Twitter bio suggests that he is a U.S. Navy Veteran. We hope both of Carolyn’s children are close with her and often visit her when free from their busy schedules.

Several friends of Gary Condit’s partner, Carolyn Berry, said to the media that she had migraines since her childhood days, which sometimes resulted in painful nerve problems. Most of Gary’s close ones also said that they had heard Gary saying his wife was ill multiple times in different events.

During a telephone call to ‘Larry King Live,’ a flight attendant who allegedly had an affair with Carolyn’s husband also said that Gary told her his wife was ill. She said that when she first met Gary, she asked him if he is married, and Gary said yes. However, he also told her that his wife was very ill, supposedly encephalitis of the brain. Also, Gary revealed to her that his relationship with his wife was more of a friendship. He really cared about his wife but stayed with her more or less to look after her.

As Carolyn Berry was mostly sickly, she rarely visited her husband’s political circles and attended public events with him. Many speculate that it might be why Gary Condit ended up seeing other women, which led to the Chandra Levy Scandal.

The former congressman, Gary Condit, was a name probably few people out of California’s 18th District had ever heard, until Chandra Levy’s disappearance in 2001. Condit gained national attention after Levy’s disappearance, as he was reportedly having an extramarital affair with her.

At first, the long-time husband of Carolyn, Gary, denied having an affair with Levy but later confessed. Then, a year later, Levy’s remains were found in a Washington park.


Though police did not suspect Carolyn’s partner, Gary, Levy’s parents kept him as the key player in the investigation in Levy’s disappearance. Moreover, writer Dominick Dunne of Vanity Fair also suggested that Gary kidnapped and murdered her with his friend’s help in one of his articles. But, later, Gary made Dunne pay him an undisclosed amount for defaming him. He even sued many other various media and magazines for defamation of his character. The truth about Condit and Levy’s relationship and Levy’s death is still a mystery.

Furthermore, Carolyn Berry’s husband, Gary Condit, was not the only person defamed by the media people after the scandal. Soon after Condit became the main focus of news headlines, The National Enquirer magazine stated that Carolyn flew into a rage while talking to the then-missing girl, Chandra Levy, in a telephone call. However, Berry denied the allegations.

As a result, the magazine and Berry settled a $10 million libel lawsuit later.

Moreover, Carolyn Berry reportedly received many letters during that period, and most of them were from people telling her to leave her husband. But, she kept her faith in her man and never left his side.

Where Is Carolyn Berry At The Moment?

As mentioned earlier, Gary Condit’s wife, Carolyn Berry, usually stays away from public attention. She rarely appeared together with her husband in public, even before she and her whole family became the nexus of a media frenzy after the Chandra Levy case. So, very little is known about her private life and what she does at the moment.

However, despite all the news about her husband’s affairs outside their marriage, Carolyn Berry still lives with her husband, Gary Condit. She always trusted her better half, Gary, and acted as his dutiful supporter throughout his years in public office. Even after her husband’s scandal, Carolyn did everything she could to be helpful and supportive.

Carolyn Berry lives a peaceful life in Arizona with her husband, Gary Condit, which she apparently bought with her own money in 2003. Though she maintains a private life at the moment, we hope to see and hear more of her in the days to come.