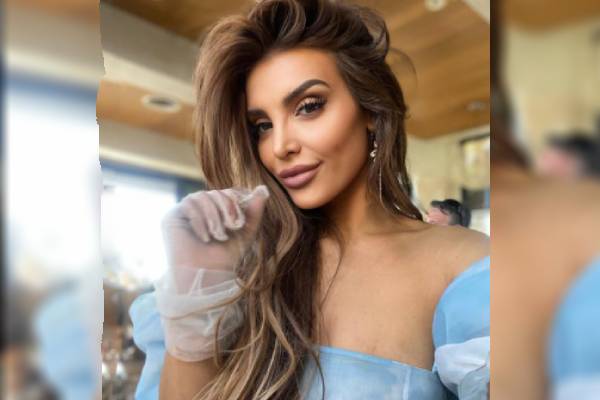 Hana Giraldo is the youngest daughter of renowned singer Pat Benatar and guitarist Neil Giraldo. As the child of such famous parents, she has gained huge attention from the public. In addition to that, she is also an actress known for her roles in Street Death Fight, Kulture Shock, The Count of Monte Cristo, etc.

Hana once dated Kyle Massey, an American actor. They were together for a few years and were popular as a lovely couple. So, in today’s article, let’s get to know Hana Giraldo’s boyfriend and their dynamic love story.

Were Together For Three Years

Hana and Kyle started dating in 2017 and were happy together. In addition, the lovebirds never hesitated to show their chemistry to the public. In 2018 on the occasion of Kyle’s birthday, the actress and Instagram star posted a photo with her then-boyfriend with a cute caption, expressing her affection and love.

In late 2018, Kyle and his girlfriend were spotted during their cozy strolling. The pair seemed to have a solid bond but decided to part ways after three years of togetherness.

In December 2020, the actress released an official statement of her breakup with her boyfriend via an Instagram post. It stated that she and Kyle have decided to go separate ways. She also wished the actor the best for the next chapter of his life.

Besides their romantic relationship, the former pair are also good friends and have worked on many projects together. For instance, Hana was featured in the music video of her then-boyfriend.

Already Moved On With Their Life

After the break-up, both Hana and her ex-partner have moved on in their respective life. Hana Giraldo’s ex-boyfriend doesn’t seem to be dating anyone after their separation and is likely focused on his career.

Kyle Massey seems to be investing his energy in establishing himself as a content creator. In addition, he is also a renowned actor and has appeared in the TV series Mellennials (2021) and Dutch (2021).

On the other hand, the beautiful actress is also doing well and enjoying her life to the fullest. Along with her career as an Instagram and YouTube content creator, she is also focused on her acting gigs. She recently appeared in the movie Lord of the Streets (2022). In addition, her three movies, Insta Famous, Kellys Campers, and Street Death Fight, are in pre-production mode.

Also Read: Is Tom Harlock Gay? He Once Tweeted About His Ex-Girlfriend

In March 2019, the former Disney star was sued for sending a series of pornographic text, videos, and photos to a thirteen-year-old girl. The actor was sued for at least $1.5 million.

Furthermore, a few days after the lawsuit, he denied the allegation through his attorney, Lee A. Hutton III.

However, Kyle Massey failed to show up to his arraignment in 2021. A Washington State judge issued a $100,000 warrant for the star’s arrest for missing out on arraignment twice.

Hana Giraldo was recently working on a TV show, Relatively Famous: Ranch Rules. During that time, a dating rumor between Hana and her co-actor, Austin Gunn, surfaced. Well, the fans have certainly noticed the supposed couple’s brewing chemistry, but both haven’t made an official statement about their relationship status.

In addition, the speculated pair have kept their personal lives under wraps. As such, it has become more challenging to confirm the rumors. Moreover, there is also a love triangle that includes another star, Taylor Hasselhoff.

Additionally, both Hana and Austin have not shared any photos of each other on their social media. So, could it be that they are just friends? Let’s hope they will share their story soon in the coming days.

Nevertheless, with the fame and fortune that she has earned, the actress lives a life that many people wish for. Hana Giraldo’s ex-boyfriend and she have already broken up. Hopefully, she will reveal more about her new love affair in the future. We wish Pat Benatar and Neil Giraldo’s daughter a life filled with success and joy.