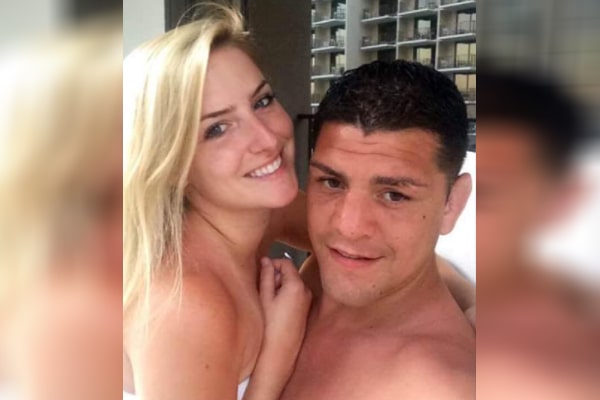 American mixed martial artist Nick Diaz is one of the most popular MMA fighters in today’s world, but little is known regarding his personal life. The fighter who hasn’t competed since 2015 stays mum regarding his girlfriend and basically life outside the camera.

On the other hand, Nick Diaz’s girlfriend Heather Nikole remains a mystery as there are minimal details regarding their dating life. Below let us look at the MMA fighter’s girlfriend and get to know her better.

Who Is Nick Diaz’s Girlfriend?

Heather Nikole and Nick Diaz were head over heels for each other, as shown in a couple of their pictures. Heather Nikole, who also goes by Heather Thomas, remains a mystery to most Diaz Brothers fans.

She attended a couple of Ultimate Fighting Championship events alongside her partner whenever his younger brother, Nate Diaz, was on the fight card. Heather also appeared on a YouTube video back in 2013 discussing the harms of drinking milk which was taken out shortly.

Nick Diaz and his girlfriend would attend parties together and also spend vacations in 2015. Heather is a stunning girl, a natural blondie with blue eyes. But, apparently, she has no social media presence, due to which her current condition remains in the shadow.

Both Nick & Heather Are Vegan

Knowing that Nick Diaz’s girlfriend appeared on a YouTube video discussing the harms of drinking milk, we can assume that she is a vegan. Both Nick and his brother Nate have been vegan for years which, according to them, is their key to success.

Unlike your typical loud & proud vegans, the lovebirds never campaigned for it as they enjoyed keeping things to themself. However, during Nick’s fight, the vegan diet plan has paid off well despite being a frequent cannabis user.

Heather Nikole’s partner would also be questioned in the press conferences regarding this choice of veganism and whether it impacted his training camp, leading to his fight.

Nick Diaz and his girlfriend, Heather Nikole, only gathered much attention during his suspension. The 37-year-old was suspended for a year as he missed three out-of-competition drug tests within a 12-month span.

This was a violation under the UFC program and Diaz was suspended for a year. He was also suspended for five years by NSAC and fined $165,000. Surprisingly the fighter is yet to make a comeback as he was having the time of this life with his loved one.

Heather Nikole’s boyfriend never regrets the suspension as they got more time to spend with each other and get to work on their relationship.

The Stockton-born fighter would make headlines back in 2017 not because of fighting but for a rumored nuptial. The whole MMA world was pumped as UFC’s bad boy finally got himself a bad girl.

As it was only a rumor, it is not sure whether the girl was Nick Diaz’s girlfriend Heather Nikole. The fighter did not confirm anything regarding the matter, and soon people moved on with life.

It would have been something different to become a husband and have kids like his brother, Nate Diaz. But as of now, the Nick Diaz Academy founder remains unmarried.

Was Heather A Victim Of Domestic Violence?

In 2018, Nick Diaz was also charged with felony domestic battery by strangulation, as well as misdemeanor domestic battery, according to online records. The incident took place in Las Vegas and the alleged victim is a female but not confirmed whether it’s Heather or not.

Diaz’s bail had been set at $18,000 and he was held at the Clark County Detention Center. During the time of his arrest, the MMA fighter was cooperative and commented that he was being framed and the alleged woman was harassing him. The charges against Nick were dropped by the Las Vegas court.

Are They Still Dating?

Despite being in a solid relationship for many years and having so much in common, the couple seems to have separated. When, how, and why remains a question as both the parties have made no comments regarding it.

Back in 2018, the 26-9-0 fighter gained weight and looked completely different. The MMA world speculated it was due to his split with Heather Nikole, but it is yet to be confirmed. Diaz has also deleted most of the pictures featuring his former girlfriend, which added fire to the breakup speculations.

After the rumored separation from his girlfriend, Diaz has been more active on social media. He posts pictures with models, making all of us wonder whether he is dating them or not. The vegan fighter is looking for a return in the UFC sometime in 2021 and is back in shape.

As for Heather, she remains hidden from the spotlight, and nothing much is known about her ever since.

Nonetheless, we wish the best for Heather Nikole and her well-being. Since she stays away from all the media attention, we hope she is doing fine.