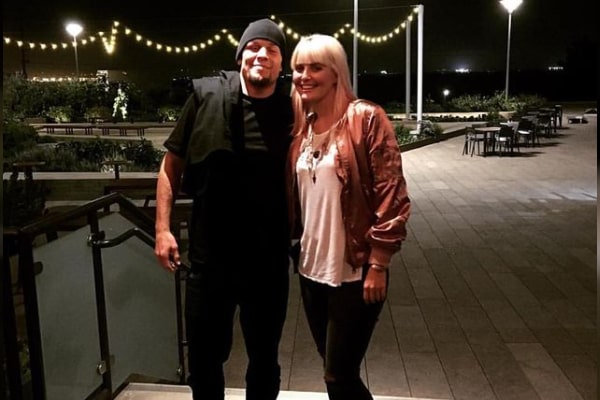 Nathan Donald Diaz, better known as Nate Diaz, is one of the most popular mixed martial artists known for his gangster antics.

Signed with the Ultimate Fighting Championship, Diaz previously fought in World Extreme Cagefighting, Strikeforce, and Pancrase. A professional since 2004, the 36-year-old is a fan favorite and a veteran of the sport.

Below, let us talk about the overly secretive better half of the UFC fighter.

Both The Partners Are From Stockton

Both Nate Diaz and his dearest Misty Brown are from Stockton, California. The 6 feet tall fighter, along with his brother, made the move “Stockton Slap,” popularly known.

According to their friends, the Ultimate Fighter 5 winner and his significant other were dating privately even before their relationship got media attention.

Many even consider them as high school sweethearts since they met each other for the first time around that age. In 2012, their relationship was revealed to the public eyes despite keeping things to themselves for a long time.

Misty Brown Is Yet To Be Nate Diaz’s Wife

Despite dating each other for over a long period of time, the couples are yet to tie the knot. Nate Diaz is active on social media and often posts pictures regarding his training and lifestyle, but only a handful of the post has been related to his personal life.

Misty Brown, who is the same age as Nate Diaz, is also very secretive about her life. She is on social media but hardly posts, which works well for the couple as they prefer to stay out of the spotlight.

The BMF contender might marry his long-time partner soon as they already have given birth to a beautiful daughter.

Nate And Misty Had A Daughter In 2018

Nate Diaz and his girlfriend Misty Brown were blessed with a baby girl on June 6th, 2018. Born at California Hospital, very minimal is known about Nate Diaz’s daughter, Nikayla Diaz.

After his victory over Anthony Pettis, the 2nd-degree black-belt in Brazilian Jiu-Jitsu was stormed with questions about his newborn.

The video below shows how the founder of CBD company Game Up Nutrition reacted when asked about his daughter.

Keeping things to themselves, Nate’s 2-year-old princess is safe and sound and away from the showbiz industry.

Who Exactly Is Misty Brown?

While the UFC fighter is open about his professional life, Nate Diaz’s girlfriend Misty Brown remains a mysteriously closed person.

Born on the 24th of March, 1985, in Lodi, California, the 36-year-old is the daughter of Steven J. Brown and Karla Brown. The 5’10” homemaker attended Tokay High School, similar to the father of her child.

Nikayla Diaz’s mother’s highest qualification is a bachelor’s degree in liberal studies, which she received from the California State University.

As for her profession, many sources confirm Misty Brown as a homemaker.

Regardless of who he is and what he is involved in, Nate Diaz is always grateful to his partner, Misty Brown. The sport that indulges violence and blood has always been the Stockton native’s go-to, but his nature is equally balanced and healed through his girlfriend.

As he looked upon his brother Nick Diaz as a father figure in their childhood, the 21-13-0 fighter now looks upon his partner for guidance and support.

Though surrounded by controversies, the badass Nate Diaz always has a soft spot for his lady love. The MMA fighter is also not ok with his family and daughter watching his fights.

The Couple Have Superstar Bulldogs

Nate Diaz’s girlfriend Misty Brown and him are dog lovers and are the proud owners of two healthy bulldogs. Mak and Live are the English Bulldogs owned by the couple. The MMA fighter even takes his dogs to his workout and photoshoots as they go well with Diaz’s character.

The celebrity dogs even have an Instagram account called Makaveli the Bulldog with 16.3K followers. The profile is eye warming as it includes doggos being doggos. Both Misty Brown and her beau have done a great job looking after them and, most importantly, sharing their love with the public.

On the other hand, Nate Diaz’s girlfriend Misty Brown is enjoying a private life with him. We wish the best to the mother of one for her future and her personal life.

We also hope Nate Diaz and Misty Brown tie the knot in the days to come.