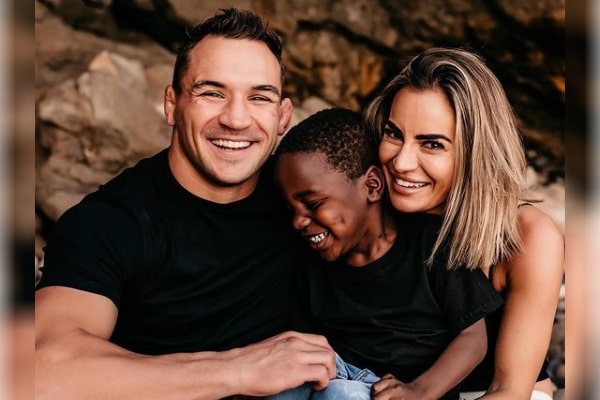 Michael Chandler made his Ultimate Fighting Championship debut recently and silenced the critics. Knocking out a talented prospect in Dan “Hangman” Hooker, the 35-year-old has made a huge impact in the UFC.

The professional American mixed martial artist is a three-time Bellator lightweight champion and was considered the biggest talent outside of UFC.

Iron Michael recently had the biggest fight of his career to date with Charles Oliveira for the UFC lightweight championship for which he fell short. Aside from his fighting business, he is also a proud father and a wonderful husband.

Married to Brie Willett since 2014, let us look into their love life and learn more about Michael Chandler’s wife.

The story of Michael Chandler and his wife Brie Willett is something to look up to. Brie, who goes by Brie Chandler nowadays, is a supportive wife.

The story of how they met is as romantic as it gets. The partners began dating after emailing for almost two years.

The 5’8″ fighter, being who he is, proposed Brie with a simple surprise filled with rose petals and candlelight dinner with wine.

After getting engaged in March of 2014, the couple would tie the knot in September later that year.

Michael Chandler’s wife, Brie Willett, always wanted to adopt a child. She was even able to convince her husband, Michael Chandler, who at the beginning had mixed feelings regarding it.

Initially, the former Bellator champ and his wife wanted a newborn of six months, but all things came crashing down when they fell in love with Hap Whitekar‘s picture sent by the foundation.

Hap Whitekar was nine months when the Chandlers gave him a new home and have never looked back on ever since.

Michael Chandler’s son Hap is of African-American origin who enjoys spending quality time with his parents.

Brie Chandler Is A Doctor

Aside from being a supportive wife and a caring mother, Brie Willett is a decorated doctor with a perfect resume.

The Nashville native works as an ER Physician Assistant at Vanderbilt University Medical Center and the University of Missouri-Columbia.

Hap’s mother is a doctor of medical science and has a specific doctorate designed exclusively for practicing as physician assistants. She is also working as a doctor in OVME Aesthetics.

Chandler’s wife also has a social media profile dedicated to her work. You can find her on Instagram with the username drbriechandler.

Unlike her husband, who competed in collegiate wrestling, Brie Willett was focused on performing well in academics.

She would firstly receive her bachelor’s degree in Psychology and Biology from Taylor University in 2007. Then she transitioned to Southern Illinois University, where she did her master’s in Physician Assistant.

The doctor would finally receive her doctorate degrees from Lincoln Memorial University and the University of Missouri-Columbia.

Whenever Brie’s husband is away on fight weeks, she spends time with her son and with her friends.

The UFC fighter’s wife has a huge friend circle that consists of only girls. She has a tight and strong relationship with the girl squad as most of her social media posts are with them.

Most of the girls in the squad are blondes similar to Brie and have newborns, which work as a plus point in the bonding process.

Nevertheless, Michael Chandler’s wife is never left alone and is always accompanied by her friends and son.

Iron Michael Chandler is a very humble and nice human being in general. If you listen to his interviews or his live sessions on his social media, you’ll get to know he is not a bad chap.

The 22-6-0 fighter has been on the winning side as well as the losing end. But one thing he never fails to mentions is his gratitude towards his wife, Brie Willett.

A professional fighter since 2009, Chandler considers his wife and his family as his biggest motivator. If it weren’t for them, he would not have been where he is right now.

With all that said, Michael Chandler’s wife, Brie Willett, has a lot going on her side as well, similar to her husband. We wish the best to Brie Willett and her family to continue living a happy and prosperous life.