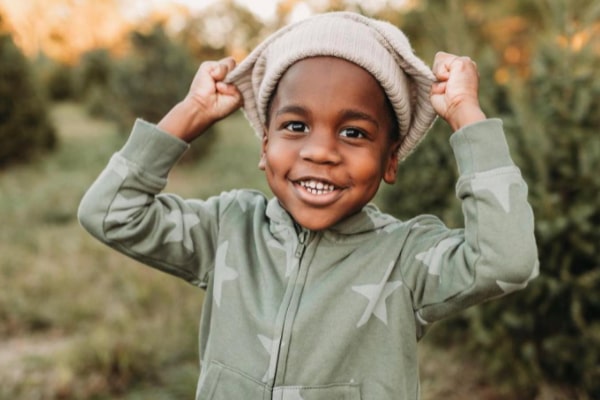 Recently signed with the UFC, the 35-year-old faced Charles “Do Bronx” Oliveira for the vacant UFC lightweight championship in UFC 262 and fell short.

Aside from his involvement in combat sports, the NCAA wrestler is also a husband and a proud father. Michael Chandler’s son Hap Whitaker is his most important motivator in life.

Below, let’s talk about Hap Whitaker to understand him better.

Michael Chandler and his wife of more than six years, Brie Willett, welcomed their first child, Hap Whitaker through adoption. Brie Willett thought of adopting babies since her teenage years as she used to volunteer at a foundation called ‘Granny’s House,’ which looked after orphans.

On the other hand, Hap’s father, Michael, was just warming up to the idea. Chandler mentions –

“He’s a bit older than what we wanted. We were looking for a newborn to six months. Funny how suddenly God says no to your plans and preferences. They sent his picture and I got a feeling inside me that teared me up. I was like: That’s my son.”

Hap Whitaker was nine months old when the Chandlers gave him a new home. Despite having adopted him, Michael Chandler and his wife Brie Willett have always shown affection to their son, Hap Whitaker, as their own.

The 4-Year-Old’s Biological Mother Was A Teenager

During the adoption process, the MMA fighter was able to meet and connect with Hap Whitaker’s biological mother.

The next day, after getting the thumbs up for adoption, the birth mom went through the Bellator record holder’s profile which classified him as a professional athlete. It was in Dallas, Texas, where the adoption process was happening, and Chandler, along with his wife, would go there to meet her personally.

The four-time NCAA qualifier described her as a beautiful soul and an amazing young girl of just 17 years old.

Michael Chandler’s son Hap Whitaker is named after two people, one of which has a deeper meaning and the other from a random encounter.

Hap comes from an old Mizzou wrestling coach named Hap Whitney, who was a four-time state champion. Chandler, a collegiate wrestler, knew the veteran personally as he provided tons of wisdom to him.

Hap’s father recalls how the old-timer would come to all of their wrestling matches and banquets. There is also a prestigious local award called the ‘Hap Whitney Award,’ which the MMA fighter won twice.

Whitney was changed into Whitaker after the family encountered a random local in Franklin, Tennessee. This happened in a restaurant over a french toast which the family didn’t order. Surprisingly the man next to them, Mike Whitaker, overheard their conversation and would offer them his french toast.

Chandler and his wife ended up talking with him for two to three hours and are still in contact.

As mentioned above, Hap Whitaker’s father, Michael Chandler, is a decorated MMA fighter. A professional since 2009, the Missouri native has established himself as one of the popular and richest MMA fighters.

While being part of Bellator MMA, Iron Chandler held multiple records. Hap’s father had the most wins in Bellator history, and most knockouts & submission wins in the lightweight division of Bellator MMA.

The 3-times nominee for fighter of the year is also a 3-time Bellator Lightweight Champion. Hap’s dad Chandler has defeated fighters like Benson Henderson, Sidney Outlaw, Brent Primus, Goiti Yamauchi, and Patricky Freire, to name a few. The Sanford MMA fighter also silenced the critics in his UFC debut by finishing off Dan “Hangman” Hooker quickly.

Furthermore, on May 7, 2022, Michael Chandler knocked out Tony Ferguson at UFC 274 with the most stunning front kick of his career. The first round of the match started with the hard shots of the fighters. But in the second round, Chandler threw a soccer-like kick that immediately dropped his opponent to the canvas and won the match.

His Mother A Certified Physician

Michael Chandler’s wife and Hap Whitkar’s mother, Brie Willett, is a physician working as an ER Physician Assistant at Vanderbilt University Medical Center and the University of Missouri-Columbia.

The doctor of medical science also has an Instagram account dedicated to her work. The four-year-old’s mother also attended top universities such as Southern Illinois University, Lincoln Memorial University, and the University of Missouri-Columbia.

Following In His Dad’s Footsteps?

Despite having a year-long process for adoption, Iron Chandler is all about fatherhood when he is not away for his fight business.

Since Hap Whitaker is 4-years-old, Michael Chandler’s son is yet to discover what he likes. As a father, Chandler is working to establish his son’s interest in mixed martial arts.

My first “bring your son to work day” – love this little dude. pic.twitter.com/vJK9eEOM9c

Recently, the power puncher took his son to the Sanford MMA training center while preparing for his 2nd UFC bout. Looking at the pictures, the father-son bonded well in the training mats. As Hap Whitaker is just 4, it is too early to say whether he’ll follow in his father’s footsteps or not.

Michael Chandler and Brie Willett live happily with their son Hap Whitaker and may soon introduce a younger sibling. We wish the best to young Hap for the future and his good health.

Hap is a unisexual name with no confirmed origin. It means chance or good luck in Icelandic.