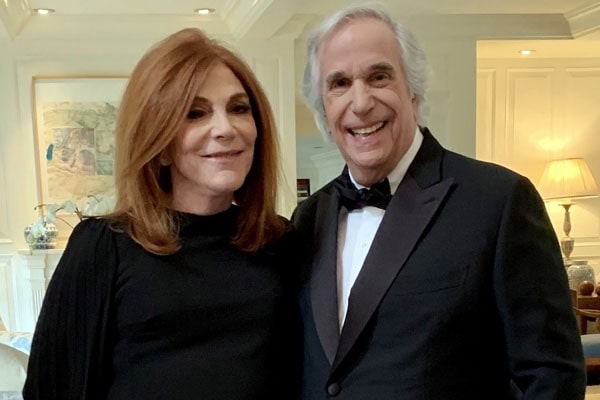 Henry Winkler is one of America’s leading comedian, director, and producer, who rose to fame after portraying the role of a greaser, Arthur ‘Fonzie’ Fonzarelli, in the sitcom Happy Days. For his performance in Happy Days, he won Golden Globe Awards twice and also earned Emmy Award nominations thrice. Ever since, he has starred in many other TV series and films such as Arrested Development, Children’s Hospital, and Parks and Recreation. The 75 years old Winkler’s most recent acting project is the dark comedy series Barry in which he portrays the character Gene Cousineau.

The Emmy Award-winner Henry Winkler’s marriage is one of the strongest marriages in Hollywood. Winkler married his wife Stacey Weitzman in 1978, and to date, there are no rumors of him having any marital issues with his beloved wife. Please take a peek into Henry Winkler’s wife, Stacey Weitzman’s journey with him, and her other personal and professional facts.

Married To Henry Winkler Since 1978

Stacey Weitzman tied the marital knot with actor Henry Winkler on 5 May 1978. Their marriage ceremony took place in the Manhattan Synagogue, where Henry also had his bar mitzvah. At that time, Winkler was already popular as the hottest television star, adding dignity to the covers of magazines, t-shirts, and lunch boxes. People used to rush up to Winkler and literally walk over Stacey’s feet. Once a woman even completely ruined her stockings while rushing to her husband for an autograph.

Gorgeous beauty Stacey Weitzman met her future husband, Henry Winkler, in 1976 when she was in an L.A. clothing store to visit one of her public-relations firm’s clients. While she was in the store, Winkler walked in and asked her for help to find a sport coat. At that time, Stacey ignored his request. A week after, when Winkler stopped by the store to pick up his coat, he asked Stacey out, which she could not deny. Eventually, the duo fell for each other and dated almost two years before sharing the wedding vows.

Before Henry Winkler’s wife, Stacey Weitzman, met him, she was married to entertainment lawyer Howard Weitzman. The former couple met in 1968 and soon began dating each other. Eventually, they tied their marital knot a year after in 1969. However, the then-husband-wife duo could not continue their togetherness for long. As a result, Stacey officially ended her marriage with Howard in 1976. However, she kept the last name of her former husband.

By the time Stacey got a divorce from Howard, she was already a mother of a son, Jed Weitzman. She welcomed her first child, Jed, with Howard in 1971. Henry adopted Stacey’s son soon after their marriage. At the moment, Stacey Weitzman’s ex-husband, Howard, has also moved on in his life and is living happily with his new wife Margaret Weitzman and son Armen Weitzman.

Besides being a mother to Jed Weitzman, Stacey Weitzman is a proud momma to two more grown-up kids with Henry Winkler. The beautiful couple, Stacey and Henry, welcomed their first child, daughter Zoe Winkler in 1980, two years after their wedding. Similarly, three years later, they became parents to one more kid, son Max Daniel Winkler on 18 August 1983.

At the moment, Henry Winkler’s daughter, Zoe, works as a pre-school teacher and is in a conjugal bond with actor Rob Reinis. Likewise, their son, Max, is also in the film industry as a film and television screenwriter and director. Moreover, Stacey and Henry are also blessed with five grandchildren.

Henry Winkler’s lovely spouse, Stacey Weitzman, is a Breast Cancer Survivor. In the early 2000s, her family learned that she had breast cancer. They treated it for the first time in 2001. However, it gave way for more sadness when it re-emerged a few years later. It even made her daughter, Zoe give a pause to her study to look after her.

To avoid facing the same health problem again, Henry Winkler’s spouse, Stacey, underwent a double mastectomy. Since then, she is living a cancer-free life with no signs of the disease returning. After recovering from breast cancer, the mother of three, Stacey, and her husband, Henry, told their daughter, Zoe, to move out and give continuity to her education.

Stacey Has Also Some Acting Credits To Her Name

Though Henry Winkler’s wife, Stacey Weitzman, mostly stayed home and raised their children, she did perform in some acclaimed movies. According to IMDb, Stacey showed her acting talents in the films, Safe, The Touch, and As Told by Ginger. She voiced the character Muffin in the cartoon As Told by Ginger in one of its episodes. Similarly, Stacey portrayed a Shelter Resident as Stacey Winkler in the 2005 drama The Touch.

Being together for forty years without having any marital issues is really a great deal for today’s celebrities. However, Henry and Stacey proved that if there are mutual understanding and trust between a couple, then a long-lasting relationship is possible. The couple always seems to have their back for each other. They can often be seen having fun together with their kids, and grandkids and yes, the pair loves to go fishing whenever they are free.