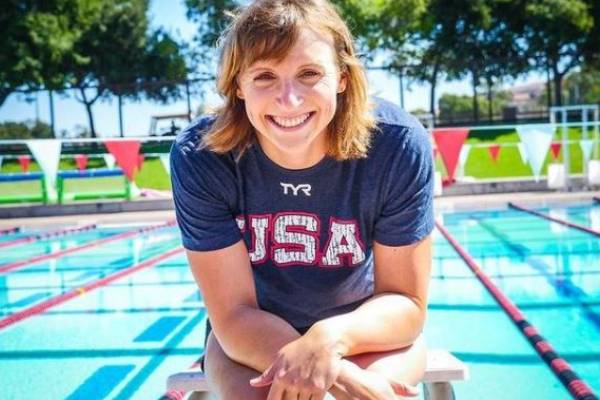 Kathleen Genevieve Ledecky, aka Katie Ledecky, is a competitive swimmer of American nationality. She is famous for winning fifteen World Championship gold medals and five Olympic gold medals in the history of female swimmers. In addition, she has gained huge fame and popularity in her professional swimming career.

Fans are curious to know more about a successful swimmer like her. Therefore, here are some of the interesting facts about Katie Ledecky.

Began Swimming At The Age Of Six

Katie Ledecky was born on the 17th of March, 1997, in Washington, D.C. Furthermore, she and her brother, Michael Ledecky, grew up in the Maryland suburb of Bethesda, Maryland.

Ledecky’s mom and brother swam for the University of New Mexico, and due to their influence, she began swimming when she was six years old.

Katie attended Stanford University and accepted an athletic scholarship. She graduated in June 2021 after completing the required courses in December 2020 for a bachelor of arts in psychology.

As stated earlier, Katie Ledecky is famous for winning the Olympic Gold Medals multiple times. Her first gold medal in the Olympics was during the 2012 Summer Olympics in London, where she qualified to swim in the finals of the 800-meter freestyle. In the final, she won the gold medal by four seconds.

In 2016, she attended the Rio 2016 Summer Olympics. Her first event there was the 4×100-meter freestyle relay. There she recorded a split of 52.64 in the heats. Then, in the final, she joined Simone Manuel, Dana Vollmer, and Abbey Weitzeil and helped the teams earn a silver media after recording a split of 52.78 with a time of 3:31.89.

Katie is competing in the 2020 Olympics in Tokyo, Japan. We hope that she makes another exemplary record in the games.

Here’s the table showing the year in which Katie won the gold medals.

Thus, Katie can be considered one of the most successful swimmers in history. She is still dedicated to her career; thus, there’s no doubt that she will achieve significant success in the future.

Talking about Katie Ledecky’s love life, it seems like she is neither married nor appears that she’s in a relationship with anyone. She is so focused and occupied with training, and it seems like she does not have time to have a boyfriend. She is interested in finding a partner someday, but at present, she seems to be dedicated and focused on being one of the best swimmers in the world.

Any guy dating a talented and successful swimmer like her might be the luckiest guy. Nonetheless, we hope that we get to learn about Katie Ledecky’s boyfriend in the future.