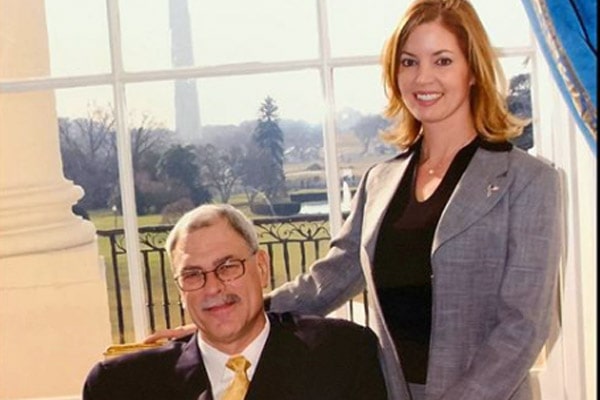 Phil Jackson and Jeanie Buss were once one of the powerful couples in the history of NBA. Image Source: Instagram/ Jeanie Buss.

Phil Jackson is one of the notorious coaches to ever coach in the National Basketball Association (NBA). Jackson is also a former American basketball player and the head coach of the Chicago Bulls. He is the winner of eleven NBA titles as a Coach surpassing the record of nine set by Red Auerbach. Besides, Jackson was also one of the most famous power couples in sports history. After two failed marriages, he was in a romantic relationship with Jeanie Buss, an American sports executive.

Jeanie Buss is the current controlling owner and president of the Los Angeles Lakers of the NBA. She was the president of the Great Western Forum before joining Lakers as it’s vice-president. Also, she is famous for being the American businessman and chemist, Late Jerry Buss‘s daughter. Moreover, she is also the ex-wife of Steve Timmons, an American former volleyball player.

Here, in this article, we will be tailing about all those reasons that made the former power couple, Phil Jackson and Jeanie Buss, end their relationship. Also, know if they ever married or not before their split-up.

Phil and Jeanie Were Power Couple For Over A Decade

The former basketball player and coach in the CBA, Phil Jackson, joined the Los Angeles Lakers as a basketball coach at the beginning of the 1999-2000 season. Likewise, Jeanie Buss was already serving on the Lakers as a vice president.

The same year Jackson began coaching the team, Buss got promoted to executive vice president of the business operations. The two met there, fell for each other, and started dating. Phil Jackson and Jeanie Buss began their relationship after Phil left his marital relationship with his ex-wife, June Jackson. He divorced her officially only in 2000. Before marrying June, P[hil was married to Maxine Jackson.

The daughter of one of the influential owners in the sport’s history dating one of the greatest coaches in the NBA is pretty crazy to think about. Plus, Jeanie Buss and Phil Jackson did it, and it worked for over a decade too. They worked together to lead the Los Angeles Lakers to the height of success and win five NBA Championships.

Phil Jackson and Jeanie Buss’ relationship directly or indirectly helped the Lakers win various championships and awards. However, their romantic bonding did not last for long.

Broke Off After An Engagement

Phil Jackson popped the question to his long-time girlfriend, Jeanie Buss, in 2012 over the Christmas holidays. The happy and surprised Buss had announced her engagement with Jackson via her Twitter page, flaunting her diamond embedded engagement ring.

After a decades-long romantic relationship as a girlfriend and boyfriend and the engagement, it looked like the then-power couple was on the verge of getting married. People were expecting to hear the good news of Phil Jackson getting married to Jeanie Buss. However, God had different plans for them.

Two years after Jackson and Buss’s engagement, in 2014, Phil became the president of the New York Knicks. Similarly, as Jeanie’s father, Dr. Jerry Buss, died in 2013, her responsibility in the Lakers’ team increased. It led the duo to live apart, and they even could not discuss their jobs with one another.

Furthermore, before Jackson joined the New York Knicks, he was offered to be the Laker’s head coach in 2012, despite being retired earlier. However, GM Mitch Kupchak, and Jeanie’s brother, Jim Buss, decided not to hire Jackson. Instead, they chose Mike D’Antoni in that position. So, according to Jeanie, her brother’s decision to not hire her former fiance, Phil Jackson, also played a crucial role in their split-up.

Hence, due to the former couple’s professional obligations and geographic distance, they could not sustain their long-term relationship. So, eventually, Jeanie Buss and Phil Jackson ended their engagement in 2016. Both notified their fans about their separation on their respective social media pages. Jackson tweeted;

“With the nature of our professional obligations and the geographic distance between us, sustaining the relationship has been difficult. We have shared many wonderful moments through the years, and we expect to remain supportive of each other in the future.”

On another side, Jeanie also went across a tweet of her own. She tweeted that she has nothing but love and respect for Phil Jackson. Buss also said that the Los Angeles Lakers is the love of her life. She loved Phil and will always. Buss added it was not fair to Phil or the Lakers not to have her undivided attention.

So, Phil Jackson and Jeanie Buss broke up some years after their engagement. They might have planned for their wedding too; however, they could not tie their marital knot due to various twists in their lives.

Both Are Still Close To Each Other

Though the power couple is no more together, Phil and Jeanie still seem to be friends as Jeanie often posts pictures with her ex-fiance. Recently, Jeanie Buss posted a photo with her former partner, Phil Jackson, wishing him on his birthday. Likewise, she shares other snapshots of Phil on other occasions too.

Once the most potent pair in NBA history, Jeanie Buss and Phil Jackson’s marriage never happened. However, they are still together as friends and mentors of each other. We hope their closeness remains for eternity.