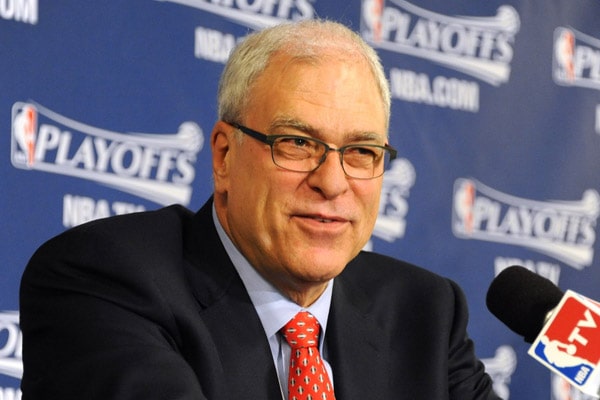 Phil Jackson was in a marital relationship with June Jackson from 1974 to 2000. Image Source: Social Media.

Legendary Basketball coach Phil Jackson is one of the most notable coaches in NBA history. As a coach, Jackson won eleven NBA titles surpassing the previous record of nine set by Red Auerbach. Moreover, he led the teams on which he worked as a coach to numerous NBA championships. Besides being a former American professional coach, Phil Jackson is also a former basketball player who played for the New York Knicks. Later, he became the executive of the same team from 2014 to 2017.

Throughout Phil Jackson’s life, he had at least three significant relationships, including two wives and a fiancee. At first, he married and divorced Maxine Jackson during his early career. Then, he again stayed in a marital bond for over two decades with June Jackson. Finally, he got engaged to Jeanie Buss, which also ended in 2016.

Here, learn everything that you might not know about Phil Jackson’s ex-wife, June Jackson, and the reasons behind their separation.

Phil Jackson Wed June Jackson After His Divorce From Maxine

The winner of various sports awards, Phil Jackson, married June Jackson in 1974. The former couple dated for a couple of years before taking their wedding vows before their close friends and family.

According to Phil Jackson’s biography written by author Roland Lazenby, Phil Jackson had a closeness problem with women. It was one of the critical reasons Jackson separated from his first wife, Maxine, in 1972. And it’s the same year when Phil Jackson pursued a romantic relationship with June, who would become his second wife.

Phil Jackson met June at a pinochle game in 1972 while his divorce proceedings with Maxine was on the way. Jackson found her enchanting, earthy in her way with a strong personality. June had just graduated from the University of Connecticut and was working at New York’s Bellevue Hospital. The then-dates, Phil and June, traveled and camped together, which made their romantic bonding stronger. Later, June moved into Phil’s loft in Chelsea, and eventually, they began living together, followed by marriage two years later in 1974.

Furthermore, Phil Jackson and his estranged wife, June, enjoyed their marital life for over two decades. However, they could not protect it further, and as a result, Phil and June divorced in 2000. Some sources noted that Jackson was planning to reconcile with June. But it never happened.

Aforementioned, Phil Jackson had a closeness problem with women. As mentioned in the book ‘Mindgames: Phil Jackson’s Long Strange Journey’ by Roland Lazenby, Jackson had numerous extramarital affairs during his career. It might be one of the leading reasons behind the official separation of Phil Jackson and June Jackson.

Moreover, Phil Jackson wrote in his book More Than A Game that his ex-wife, June Jackson, always wanted to be a priority in his life. June felt that her then-husband, Phil, could not commit to his marriage or family as his career was too important for him. She saw Phil mired in his fame and his everyday habits. Due to that, June and Phil never got time to be close to each other. So, it also might have led to Phil Jackson’s divorce from his ex-wife, June Jackson.

Besides, there might be many other reasons behind the split-up of Phil and June Jackson. However, the reasons mentioned above are only available to the public until now.

June Jackson Is Mother To Four Kids With Phil Jackson

During over two decades of togetherness of Phil and June Jackson, they became parents to four children together, twin sons and two daughters. They named their twin sons Ben Jackson and Charlie Jackson. Likewise, the estranged couple’s daughters are Brooke Jackson and Chelsea Jackson.

Besides, June Jackson is also the step-mother to one more Phil Jackson’s daughter, Elizabeth Jackson, from his previous marriage. Phil welcomed his eldest child, Elizabeth, with his ex-wife, Maxine Jackson, in 1968.

All the Jackson siblings are currently involved in philanthropic works being linked with their family foundation named PD Jackson Family Foundation. And, seeing Phil Jackson’s children working together, it seems they share a great bonding.

The Estranged Wife Of Phil Jackson, June Jackson Is A Reiki Master

The Instagram bio of June Jackson leads to her official site where you can learn about her work experiences. The beautiful former wife of Phil Jackson, June Jackson, is a famous Reiki master in San Francisco Bay Area. Also, she is a social worker providing therapeutic services in the San Francisco Area. Jackson offers three types of private sessions: grief counseling, Reiki, and a combined session of both. Before this, Jackson worked as a hospice social worker in upstate New York, Chicago, and the Bay Area for many years.

After completing a master’s degree in Social work and from various work experiences, June Jackson became a skilled counselor in the field of death and grief. She retired from that career in 2012. While Jackson was still a hospice social worker, June was also a massage therapist after completing her training in the San Francisco School of Massage in 2003. Later, in 2014, she became a certified Reiki Master and began offering services to the people combing both worlds: hospice social work and Reiki.

After divorcing from Phil Jackson, June Jackson vanished from the limelight for some time. However, lately, she is active in her social media pages, including Facebook and Instagram. Seeing the photos of June on her Instagram, she seems to be enjoying her old age peacefully with her four children, eight grandchildren, and great-grandchildren.

However, Phil Jackson began a romantic relationship with Dr. Jerry Buss‘s daughter and the president of the Los Angeles Lakers, Jeanie Buss, after separating with June. They dated for over a decade and got engaged in 2013. But, due to various reasons, one of the most powerful couples in the NBA, Phil, and Jeanie parted their ways away in 2016.

Nevertheless, Phil Jackson and June Jackson is living a blissful life far from the bright spotlight. Furthermore, the former husband-wife duo is still close to each other as friends and are connected through their children.