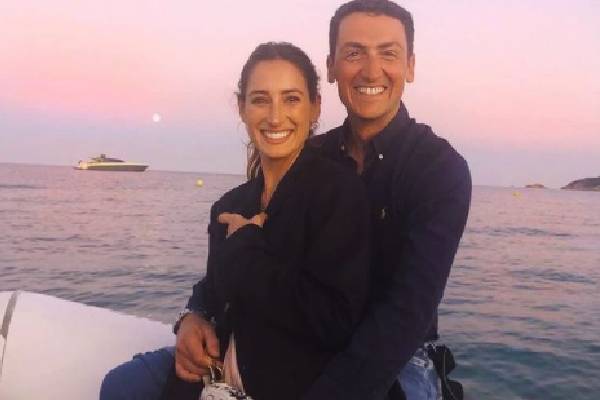 Born as Jessica Rae Springsteen, Jessica Springsteen is an American equestrian. She is also well known as the only daughter of musicians Bruce Springsteen and Patti Scialfa. Besides, she is also a caring sister of her two brothers, Evan James Springsteen and Sam Ryan Springsteen. She has made herself, her parents, and her team proud by representing the US in numerous International equestrian competitions.

The well-known show jumping rider Jessica Springsteen’s professional achievements are crystal clear to her fans worldwide. However, there is more to her personal life as well. Jessica was previously in a relationship with a famous Argentinian sportsman and model, Nic Roldan. Unfortunately, the ex-pair could not further their relationship and parted ways. Now Jessica is in a healthy relationship with Lorenzo de Luca.

Here, get to know about Jessica Springsteen and Lorenzo de Luca’s love life and their current relationship status.

The adorable pair Jessica Springsteen and Lorenzo de Luca started dating in July 2018, after Jessica split with her ex-lover, Nic Roldan. Jessica and Lorenzo are sharing an intimate relationship for the last three years. The two partners are having a good time, which can be seen clearly from their Instagram posts. They love each other very much and do not hesitate to show it off to the world as Jessica’s Instagram posts show her passionate love for the Italian rider Lorenzo.

As seen in their social media handles, the love birds are often traveling to several places together. Jessica never forgets to thank her boyfriend for being the most caring and supportive partner in her life.

The equestrian, Jessica Springsteen’s boyfriend, Lorenzo De Luca, is an Italian rider. He was the only Italian rider to have competed in the Rolex IJRC Top Ten Geneva in the 2018 edition. The champion had also secured second place in Longines FEI Ranking in 2017. This is the highest position achieved by an Italian rider till now. He also won the Rolex Rome Grand Prix at Piazza di Siena in 2018, riding Scuderia 1918 Halifax van het Kluizebos, a male horse. The stallion was also nominated first in the world ranking of the World Breeding Federation for Sport Horses in 2017.

Armitage Boy is considered Lorenzo’s top horse of all the horses, which is famed for bucking as he jumps around the course. The qualities that impress Lorenzo about a horse are balance, character, and carefulness.

Although Lorenzo has established himself as a professional rider, he was born in a family having no equestrian background. His father was involved in construction works then. The successful rider of today started riding for the first time when he was just nine years old. Lorenzo’s father was given a horse as payment for some construction work; that is how Lorenzo was proved lucky enough to ride a horse of his own. But the family eventually sold the horse due to its bad behavior.

Jessica Springsteen’s lover, Lorenzo, dreamt of the big horse-riding competitions when he started competing at 11. However, dreaming was not only enough to achieve the dreams in the absence of parent’s support. That is why Lorenzo left his home at the age of eighteen after finishing school to fulfill his dreams he had seen from an early age. All that Jessica Springsteen’s boyfriend Lorenzo wanted was to be financially stable and to prove to his father that riding is also a good career to live a happy life. The talented rider joined the team of Stephan Conter, Stephex Stables, in 2015 and is still working in Belgium. And from there, he didn’t have to look back in his life.

Different Italian athletes are supported by different sections of the Italian military. Moreover, Lorenzo de Luca is seen wearing a blue uniform while competing in order to represent the Italian Air Force branch that supports him. It is definitely a great honor for him and his family to represent his country in several competitions. Nevertheless, the elegance and spontaneity during competitions help him to execute spectacular performances during his play.

In 2019, Jessica Springsteen’s parents, Bruce Springsteen and Patti Scialfa attended three days long, the Longines Global Champions Tour to support their daughter Jessica and her Italian rider boyfriend, Lorenzo de Luca, when they competed. However, Jessica and her partner Lorenzo also watched the competition from the VIP section instead. The whole family seemed to enjoy the competition sitting in a VIP area. Moreover, the love birds, Jessica and Lorenzo, did not hesitate to show their affection for each other. They were also seen kissing while sitting next to their parents.

It has been three years since Jessica and Lorenzo began their relationship. Their love and affection for one another also seem to have increased, which is a good sign with passing time. We hope we will get to hear the news of this lovely couple tying their marital knot soon.

Aforementioned, Jessica and her partner, Lorenzo de Luca, love spending good times with one another. Although Lorenzo has his work in Belgium, he also lives with his beautiful girlfriend, Jessica Springsteen, in Florida. During the pandemic of COVID-19, Lorenzo also expressed his sadness for being away from his loved ones. However, he used to reassure himself by talking to them virtually every day.

While the couple is sharing hearts, they are also focusing on their career as horse riders. Even though Jessica has made it public that she is in a loving relationship with Lorenzo de Luca, the showjumping champion is yet to reveal details about how they met. Since both are from the same professional field, we can guess they must have met for the first time during their games. However, given her activeness on the social media handles, we may not be far from knowing how the couple met one another.

Moreover, Jessica made her Olympic debut in the ongoing Tokyo Olympics 2020. She represented the USA in the event and won a silver medal in the team jumping category. Lorenzo must have been cheering for his partner and is undoubtedly proud of her achievements.

Let’s see if the power couple will take their relationship further or not now.