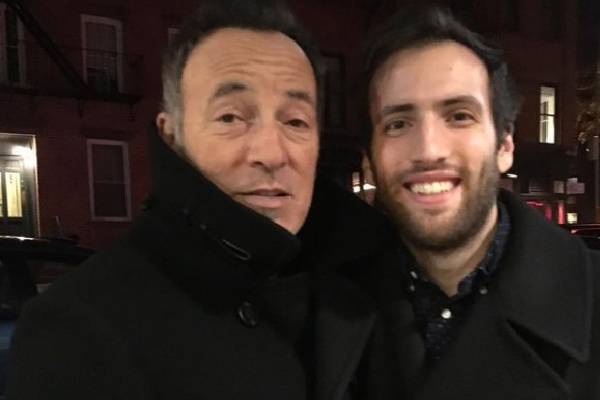 Bruce Frederick Joseph Springsteen, who is well-known as Bruce Springsteen, is a renowned American singer. He became famous worldwide in the mid-1970s after releasing his third studio album, Born To Run. The talented musician was born to Douglas Frederick Springsteen and Adele Ann Springsteen.

Besides being noted among people for his socially conscious and poetic songs, Bruce is also a family man. He is a caring partner to his wife, Patti Scialfa, and a doting father to his children. Here let us know more about Bruce Springsteen’s eldest son, Evan James Springsteen.

First Born Of Bruce And Patti

Bruce Springsteen tied the marital knot with Patti Scialfa, on June 8, 1991, in a private ceremony with the involvement of a few family friends. The couple started blossoming their career in the field of music. There is no doubt that they created their own ventures.

However, they became parents to their first child before their marriage. On July 24, 1990, Evan Springsteen was born. The loving partners felt much more responsible after Evan’s birth and got hitched. The energetic musician and his beloved wife held their first bundle of joy with excitement and then welcomed two more children.

Evan’s Parents Are A Power Duo

The talented Evan Springsteen’s parents are purely a powerful duo. The couple has been together for the last three decades. In addition to this, they have been a massive supporter of each other’s success.

The only reason behind their three-decade-long marriage is the mutual understanding and respect they have for each other. Evan’s parents’ relationship has blossomed and helped the power couple to collect good fortune and a family of five.

Evan James Springsteen is the oldest child of Bruce Springsteen with his second wife, Patti Scialfa.

After a year of his birth, Evan became a brother for the first time. His parents welcomed his sister, Jessica Rae Springsteen, on December 30, 1991. Jessica is a well-known American equestrian. She is also popular as a showjumping champion rider who has won several medals to date.

Jessica represented Team USA in the 2020 Tokyo Olympics and participated in team jumping and individual events. Springsteen won a silver medal in team jumping. Jessica’s family including her brother, Evan, were cheering for her from home and are undoubtedly happy about her success.

Besides her professional career, she also loves to post photos on her social media handles and update her fans.

Similarly, Evan’s younger brother, Sam Ryan Springsteen, was added to the Springsteen family on January 5, 1994. Sam is officially a Jersey City firefighter. He was sworn with the prestigious title during the City Hall Ceremony, along with fifteen others.

Fans of Bruce and Patti can view their offsprings’ photos on their social networking accounts. The proud and dedicated parents often share pictures of their children on their social media.

When you are born in a family with musical history, music is obvious to be a part of your interest. And following the tradition, Bruce Springsteen’s son, Evan Springsteen, is also involved in music.

He is also often seen sharing the stage with his father and mother, giving a rocking performance. With a great passion for the music field since childhood, Evan is also gaining success in the instrumental field.

According to IMDb, Evan attended Ranney School and Rumson Country Day School. He seems to be a hard-working and dedicated child during his school time. Evan is currently pursuing a career as a singer. He graduated from a private Jesuit research university, Boston College, with a music degree. During his study, he won the 2012 Singer/ Songwriter Competition during Boston College’s Arts Festival.

Evan was also involved in Sirius XM Radio as a program director and festival producer. Being inspired by his parents and grandparents, there is no doubt that he is already doing a great job in the music field. Furthermore, he will also get all the support from his father and mother to make a successful career.

Evan Is A Confidential Person

Bruce Springsteen’s son, Evan James Springsteen, is very secretive about his personal life. Although he has been involved in a music career since the beginning, he prefers to keep a low profile. Moreover, Verge Wiki has stated about Evan’s relationship with a woman named Isabel, but the information has not been confirmed to date.

Although Evan Springsteen’s whereabouts are kept confidential, it’s for his own well-being. Hence, let’s hope for his good health and comfortable life.