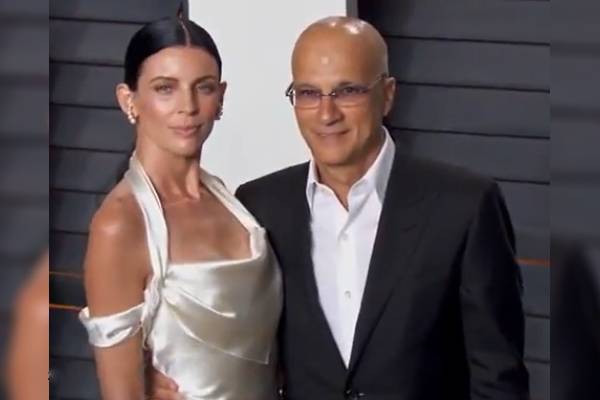 Jimmy Iovine, who also goes by James Iovine, is a powerhouse entrepreneur of American nationality. He is best known for being the co-founder of the American record label Interscope Records. In addition, the entrepreneur has gained immense fame and fortune from his career in the music industry.

With that said, now let’s take a look at the personal life of the media mogul. Well, Jimmy has been married twice. His first marriage was to an American model and writer, Vicki Iovine. The former pair were together for over two decades. In 2009, they parted ways and have already moved on.

Was Born In London

Liberty Lettice Lark Ross, shortly Liberty Ross was born on September 23, 1978, in Westminster, London. Ross is the daughter of Ian Ross and Roxana “Bunty” Lampson. Her father, Ian, is a founding member of Radio Caroline.

Furthermore, Liberty’s grandfather, Miles Wedderburn Lampson, 1st Baron Killearn, was a British diplomat. Not only that, but Jimmy Iovine’s wife is of Italian heritage through her great-grandfather, Aldo Castellani, who was an Italian pathologist and bacteriologist.

Liberty is a renowned English model and actress. She has achieved a lot in her career. At the age of seven, she was photographed by Norman Parkinson for a Tiffany Jewels campaign. Shortly after, the beautiful model appeared on the cover of Ozzy Osbourne‘s album No Rest for the Wicked. In addition, she is the winner of the 2000 Model of the Year at the Elle Style Awards.

Although she worked at numerous places, her debut runway was for Louis Vuitton in Paris in 1999. Moreover, she was one of the most famous Vogue cover girls. Her unique looks from her raven hair and blue eyes make her stand out from the crowd.

Jimmy Iovine’s Wife Is An Actress

The London native model is also an actress with numerous acting credits. Her debut movie is War Requiem (1989). Although she is much renowned for her modeling works, she has earned significant fame and fortune through her acting career too.

The record producer’s spouse is best known for her role in Snow White and the Huntsman, W.E., and Sweetheart, which was directed by her ex-husband. Nonetheless, the model and actress have gained immense success throughout her career. Well, she might not be as rich as her billionaire husband, Jimmy, but Libert Ross’ net worth must be a considerable sum.

Previously Married To A Famous Director

Liberty Ross was previously married to a famous English film director, Rupert Sanders. They tied the knot in 2002 and moved to Los Angeles to further the filmmaker’s career. After getting married, the model focused on being a housewife and temporarily put a stop to her career.

After spending a decade of marital life, Ross and Sanders divorced in May 2014. Liberty Ross’ ex-husband’s cheating scandal with another actress, Kristen Stewart, was publicized by a renowned publication. Following that, the model filed for divorce in 2013, and the ex-couple officially parted ways in 2014. The former also has the custody of their two children.

Is Happily Married To Jimmy Iovine

After separating from her ex-husband, Liberty Ross started dating a legendary entrepreneur in 2014. The adorable couple dated for about two years before walking down the aisle in 2016 on valentines day. It was a star-studded wedding ceremony.

Ever since then, Liberty and Jimmy have been happily together. The raven-haired beauty currently lives with her second husband. Moreover, the lovely pair share a very close bond, and they seem to spend a lot of quality time together. They also often attend public ceremonies and parties together.

Furthermore, the couple has not welcomed any kids together. They might be just enjoying each other’s company right now. Hopefully, Liberty and Jimmy’s relationship will last forever.

As already mentioned, Liberty has been married twice. From her first marriage, she has two kids, Skyla Sanders and Tennyson Sanders. Both of them have grown up and are focusing on establishing their career.

Additionally, Liberty Ross is the stepmother of four stepkids, James Iovine, Jeremy Iovine, Jessica Iovine, and Jade Iovine. They are Jimmy’s children with his previous wife, Vicki Iovine. Moreover, Iovine siblings are also now adults, and some of them are also in a relationship.

When Jimmy and Liberty got married, their children showed a lot of support for their relationship. They all attended the wedding ceremony and congratulated the lovely couple on their special day. Not only that, but the Iovine kids also posted updates about their dad’s marriage on their respective social media accounts.

Today my father gets married. I couldn’t think of a better way to spend Valentine’s Day pic.twitter.com/9IzpidfYot

Overall, Jimmy Iovine’s wife has accomplished great success in her professional life. The famous actress and model is doing well in her personal life too and seems happy with her new partner. We wish Liberty Ross more happiness and success in the coming days.