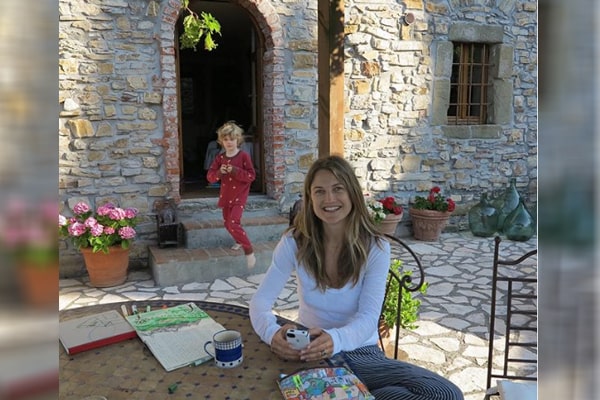 It’d be a miracle if a celebrity manages to bury their personal information entirely. But the Internet has done its part, and almost everything is one key away. Likewise is the story of Ted star, Joel McHale, and his wife, Sarah Williams.

Most often, it is the spotlight that takes away the charm in a relationship, but the beautiful pair of Joel McHale and Sarah Williams has been together for over two decades.

Joel McHale’s Wife Is An Artist

Joel McHale is one of the most prominent names in the film industry, but his wife is successful in her own rights. McHale’s partner is as gorgeous as one can imagine and is a full-time artist.

Sarah Williams’ Instagram is jam-packed with her mixed-media art and her baby picture. There are not much about her achievements as she is a little secretive, but she sure is a super mom like her husband, Joel calls her.

Furthermore, she is also a part of several workshops that involves children and creativity. Besides being an artist, McHale’s wife is a family person and loves to be around her parents. She wishes them on their special occasions and uploads their pictures regularly.

Likewise, Sarah is not a single child in her household; she has a brother whom she also shares a throwback pictures of.

Met And Married Over Two Decades

The 48-year-old comedian Joel McHale and his marriage is one of few strong and long relationship. The veteran actor married his wife, Sarah Williams, on July 20, 1996, and is still going strong.

Their relationship was pretty spontaneous and exciting. According to the Medium, Joel McHale and Sarah Williams met one year after graduating from the University of Washington. McHale asked his sweetheart out while calling her friend, and their relationship grew pretty swiftly.

After a year of meeting, Joel McHale and Sarah Williams decided to walk down the aisle, and the rest is history. The light-eyed duo is still in love and shares a great passion for one another.

Interestingly, the pair recently celebrated their 24 years of marriage and still seem as happy as they were before. Guess, the glow of sharing love and being loved is radiant.

Tricks To Keep A Healthy Relationship

American actor and comedian, Joel McHale and artist, Sarah Williams are married for more than two decades now. They must have gone through a lot from their years-long marriage. However, they have managed to maintain the freshness in their marriage.

While talking to the Web MD, Williams’ husband shared his secret to maintaining a healthy relationship. He revealed that choosing your spouse every day is very crucial. Furthermore, telling oneself that their partner is the one they want to be with and love might help keep the relationship fresh.

Likewise, he also revealed that reminding oneself to love their partner consciously to the point it happens subconsciously is the key to a healthy relationship.

Joel McHale’s wife gave birth to two children during their marriage and had some worrying health issues. However, tackling their child’s health issue made their bond more robust and are even more in love with one another.

Aforementioned, Sarah Williams and Joel McHale welcomed two children from their decades-long marriage, and both of them are sons.

McHale’s first son, Edward Roy McHale, was born in 2005. The pair call him Eddie. Unfortunately, Eddie was born with two large holes in his heart, and it was a horrific experience for the couple. However, he underwent open-heart surgery when two months old and made a full recovery after.

Unfortunately, the bad news was around the corner when one of his sons was diagnosed with dyslexia. The Community actor himself conquered the disease.

This was not the only hardships the couple went through. McHale’s’ soulmate also suffered a miscarriage and had to consult Dr. Drew Pinsky. Presently, the pair is living a healthy life with their children.

Similarly, Sarah Williams has resumed making postcards and stickers. Despite marrying such a massive name in the entertainment industry, Joel McHale’s wife decided to live in privacy. Let’s hope they remain happy and conquer in the coming days.