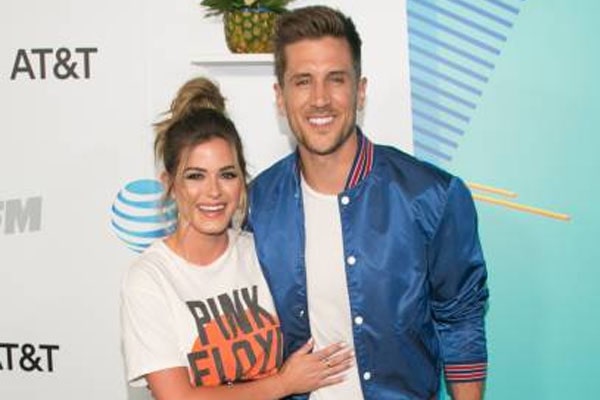 The lovely couple, JoJo Fletcher and Jordan Rodgers have a combined net worth of $4 million. Image Source: Getty Images.

After being engaged for over two years now, JoJo and Jordan are planning for their wedding. But they are yet to fix a wedding date. As the couple is a millionaire, we are sure their wedding will be an extravagant one.

JoJo Fletcher’s Net Worth and Earnings

According to Wealthy Persons, the gorgeous Joelle Fletcher, aka JoJo Fletcher’s net worth estimates at $2 million. It’s from her profession as a TV star that she has earned such a fortune. Alongside that, Jordan Rodgers’ beau JoJo is also a real estate developer.

Some sources suggest to us that The Bachelorette stars are paid $100,000 per season. And since JoJo is one of the top names of the show, she might have earned much more than that. As mentioned earlier, JoJo is also a real estate developer. According to Payscale, a real estate developer earns a staggering amount of $95,000 per year. All the cash flowing into JoJo Fletcher’s bank account surely makes her net worth a grand one.

Jordan Rodgers’ wife to be JoJo Fletcher founded a contemporary lifestyle collection named Fletch. Here are some of the products found in JoJo’s founded company along with their respective prices:

The chunk of money JoJo receives from her product’s sales also contribute to her net worth.

Jordan Rodgers’ Net Worth And Earnings

Jordan Rodgers’ net worth is estimated to be a whopping $2 million. JoJo Fletcher’s beau Jordan earned his massive riches from his career as a football player. As he is retired now, he works as a sports commentator, which also contributes to his success.

It was during his high school days when Jordan started playing football and continued to do so in college. After his graduation, Jordan turned his focus on football. He was first signed to Jacksonville Jaguars in 2013. Some sites claimed that Jordan Rodgers’ salary was around $500K per year. As for now, he is working as a sports commentator, and we are sure his income from that also must be a huge one.

The Rise In The Couple’s Net Worth

Thanks to their fame from “The Bachelorette” show, in the last few years, there has been a massive increment in JoJo and Jordan’s net worth. Here is a table representing growth in the Net worth of the lovely couple.

So, we can say that the rich couple is living the life of riches and lavishes. As stated before, the loving couple’s marriage is going to be a magnificent one.