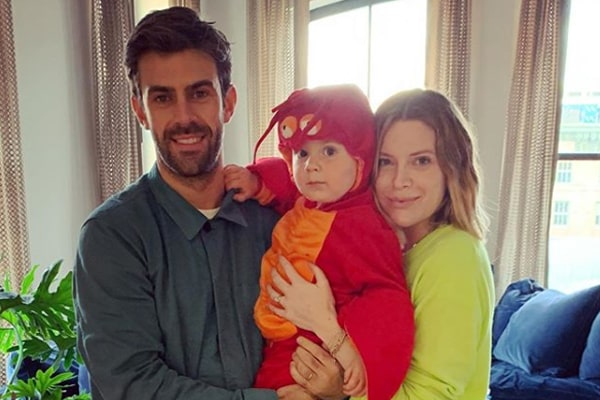 Tomas Woodger is a leading name in the stock market and is very secretive in nature. Image Source: Foster's Instagram.

The veteran musician, David Foster‘s daughter, Jordan Foster, is a married woman. A stylist by profession, Jordan Foster initiated her career via the music industry and eventually shifted towards the world of fashion.

As of now, Jordan Foster is amongst the most notable names in the fashion industry. Although she is now married and mother of two, her fashion sense is undeniable. But who managed to charm the beautiful blonde?

Let’s find out more about Jordan Foster’s husband and peek into their love life a little.

Jordan Foster is a remarkable name in the fashion industry, while her husband, Tomas Woodger, is a notable name on the world of the stock market. He is the leading expert in brand and lifestyle marketing with decades-long experiences, all while cultivating close relationships with influencers, partners, etc.

Foster’s husband currently serves as the Vice President of Brand Activations at StockX. He has been associated with the world’s first stock market and leading luxury resale marketplace since October 2018.

Furthermore, Tomas, aka Tom, also serves as V.P. of Global Cultural Marketing from February 2020. Likewise, he acts as an advisor for Red Sea Ventures and Sweetgreen since August 2018 and May 2018, respectively.

Life is built with experiences, and Jordan Foster’s husband has tons of it both in regards to life and career. Tom has an extensive resume. Aforementioned, he is currently associated with three different companies but had worked years to reach the position.

Before all his current achievements, Tom had spent four years at Sonos as Global Partner & Cultural Marketing. Likewise, he also worked for Momentum overseeing the American Express music and entertainment program for six years. During his time in the Momentum, he worked as Music & Entertainment Account executive and created global deals with Live Nation, Justin Bieber, ETC.

Additionally, he also led special experiences for VIP Amex cardmembers as International music and entertainment partnerships lead. Although there are tons of information regarding Tomas’ work experiences, his private life is rather grounded except that he is a graduate of New Castle University.

Jordan Foster’s partner has been inactive on Facebook since 2016, and his Instagram is nowhere to be found. So, while respecting his privacy, let’s have a look into their marriage.

Grand Wedding Of Jordan and Tomas

Born over 5000 miles apart from one another, Jordan Foster and Tomas Woodger’s world crossed the path in 2011 in London. The couple instantly clicked, and the rest is history.

According to Woodger’s wife, Jordan Foster’s Facebook, the pair got engaged in July 2012. Everything went pretty smooth in their relationships, and in less than two years of their first meet, the couple decided to walk down the aisle.

The wedding took place on 20 July 2013 in Los Angeles. Jordan Foster is a stylist herself, so she looked like the goddess of grace in a perfectly elegant lace gown by Monique Lhuillier while her husband looked dapper in T. M. Lewin‘s suit.

Jordan Foster and Tom Woodger’s wedding was grand and sophisticated. Since 2013 to date, the couple is still head over hills for one another despite Foster’s hesitation to share her husband’s pictures on her Instagram. But as aforementioned, Tom seems to be a private person, so; it’s somewhat understandable.

Also, Jordan comes from a family of celebrity background, so she understands the consequences of romanticizing their relationship on social media. So, it’s a wise idea to separate private and personal lives.

Throughout their years-long relationship, Tom Woodger and his wife, Jordan have welcomed two adorable humans by far. The couple seemed to have planned thoroughly about embracing their offsprings.

Tom Woodger’s spouse, Jordan, does not shy away from sharing their son’s pictures on Instagram. Only after a few years of welcoming their son home, the pair brought a new member, Juni Margaret Woodger, home in May 2020.

Jordan shared a picture of her son and daughter and announced the arrival. Foster and Woodger’s son, Otto, is likely to be the best big brother.