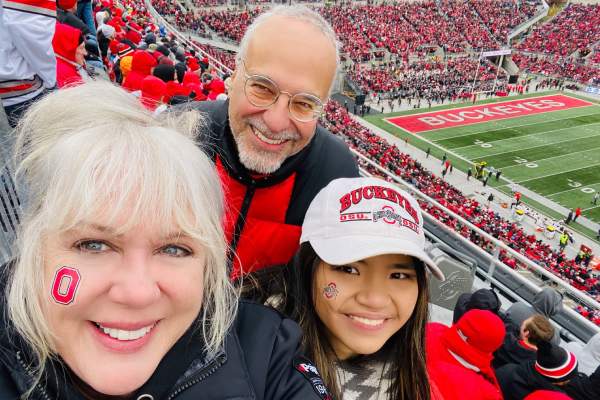 Who doesn’t know about Saturday Night Live (SNL), right? Some might be hearing it for the first time, but don’t worry; we’ve got you covered. An American late-night live television sketch comedy and variety show airing on Peacock and NBC is actually a hub for many comedians. For some, it is the start line of their long-running career.

One such individual who came into the limelight as a cast member of SNL is Julia Sweeney, who is known for her character Pat. Julia has gone through a series of personal trauma, but she stands still, thanks to the support of her family and life partner. Talking of which, she has been happily married to Michael Blum. So, follow along and find out how it started for the lovely pair.

Met Through A Fan Mail

We never know what life has planned out for us. Just like that, Julia never thought that a simple fan mail would later become a way of meeting the love of her life.

Sweeney received some fan mail from her future brother-in-law. After seeing Letting Go of God, he set them up via email. He had written that he had the perfect guy for her and wished she would give him a chance. Sweeny wrote off the letter as an excited fan. Over the years, she began meeting people who knew the guy that wrote the letter.

One day, Julie was doing a show, and the person that wrote the letter was there. He introduced her to his mom. She ended up having a good time with her future mother-in-law and decided to find the letter and reply to the man’s brother. The rest is just history.

After replying to the letter, Julia and Michael began going out. However, it was a long distance for them as he lived in Chicago and she resided in LA. Julia Sweeney’s husband, a biophysicist, always wanted to live in LA, so as things got serious, he decided to sell his Chicago business of making protein crystallography X-ray detectors and move to the City of Angels. However, it was not as easy as it seemed, but thanks to Sweeney, she took charge.

Michael Blum’s wife proposed to him and informed him that she was moving to him. She was not thrilled with her daughter Tara Mulan Blum‘s school in LA, and Michael had informed her about how better public schools were there in Wilmette, Illinois. Recalling the time she proposed to him, she stated that after Mulan graduates, he would go to LA, and he agreed.

It is support and respect that made Michael and Julie withstand every storm without having to fear breaking apart. After being together for many years, the duo decided on happily ever after. As a result, the love birds tied the knot on May 3, 2008. The bride wore an elegant satiny gown, and her daughter walked her down the aisle to the tune of Hayley Mills Disney movie, The Parents Trap song “Let’s Get Together.”

The lovebirds were married by fellow comedian and SNL alum Don Novello. The newlyweds entertained the guest in royal style. It must have been a lovely ceremony. Ever since then, the duo has been enjoying their marital bliss, and we hope their matrimony lasts a lifetime.

Despite being together for one and half decades now, the couple has not welcomed any children. But, the lovebirds are proud parents of a daughter, Tara Mulan Blum. She is all grown up, and in May 2022, she graduated with an engineering degree from Ohio State.

She did it! My daughter Mulan just graduated from The Ohio State with an engineering degree. I’m couldn’t be prouder. pic.twitter.com/Duk37CsBkD

Michael Blum’s wife adopted their daughter in 2001 from a Chinese orphanage. At the time of adoption, Julia Sweeney’s daughter’s name was Mulan, and she wanted to change it to Tara.

Sweeney’s child then looked at her and hinted she could call her Tara, but her name was Mulan. Julia Sweeney’s husband and child share an adorable bond. All in all, the family of three seems to be living a wonderful life. We hope Julia and Michael’s marriage survive every test of time. Our best wishes are with them.