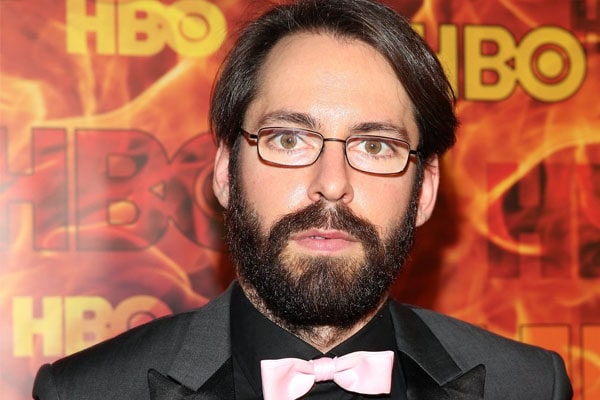 Born Martin James Pflieger Schienle, Martin Starr, is a well-known American comedian and actor. He is best recognized for his TV roles of Bertram Gilfoyle on the HBO series Silicon Valley, Roman DeBeers on the comedy series Party Down, and many more. Similarly, he is also famous for his act in the films like Knocked Up, Adventureland, The Incredible Hulk, and Spider-Man: Far From Home.

Lately, many of Martin Starr’s fans are showing interest in his love life, and several online sources are claiming that he tied his marital knot recently. A few years back, there were rumors in the media headlines that he got engaged to his long-time girlfriend, Kate Gorney. So, is Kate Gorney, actor Martin Starr’s wife at the moment or still engaged to him? Let’s find it out here.

Various online sources claim that Martin Starr proposed his long-time girlfriend, Kate Gorney, with an engagement ring in 2014. Starr dated Gorney for a while before deciding to make her his fiance.

The same year Martin Starr got engaged with Kate Gorney, he had taken to Twitter to announce his criteria for being his ideal girlfriend. He described his girl to be a beautiful lady, with his sense of humor, and someone on whom he could be comfortable around. Probably, Starr might have found the same characteristics in Kate Gorney, which made him propose her to be his fiance.

Lately, some online news portals noted that Martin Starr married his long-term partner in a secret ceremony attended by a few of their close friends and family members. Moreover, reportedly, Starr was spotted wearing a new wedding ring. However, the actor himself has not confirmed his marriage to his fans to date.

Moreover, Martin Starr has not posted any photos revealing anything regarding the rumors of his wedding. Instead, he shared photos with musical artist, Alex Gehring making people speculate that he is no longer with Kate Gorney. Starr is carrying Gehring intimately in the picture, and the caption also suggests that she means the whole galaxy to him. So, it looks like Kate Gorney is not Martin Starr’s wife; rather, he found love in the talented musician.

Starr Prefers To Keep His Love Life Far From Limelight

Despite being active in social media handles having thousands of followers, Martin Starr usually does not share his personal life on them. Consequently, not much is known about Martin Starr’s girl at the moment.

The only time Starr opened up to the public about his love life is during an interview with Bustle magazine in 2015. While his I’ll See You In My Dreams co-star, Malin Akerman, confessed that she would never date Martin Starr as he was already in a relationship. In response, Starr also confirmed Akerman’s words by disclosing that he had a girlfriend.

Ever since then, Starr has not released any details in public regarding his romantic relationship. However, he seems to in a serious relationship with Alex Gehring. On top of that, there is not a single photo of Starr with Gorney, which confirms that the pair are not together, let alone married.

So, the versatile actor Martin Starr is currently dating the talented musician Alex Gehring. But, it looks like their relationship is new. So, we might have to wait for a while to see Starr tie the knot with his lover. But, let’s hope that he will reveal more about his personal life in the coming days. And we are eagerly waiting for the moment when the world will get to know about Martin Starr’s marriage.