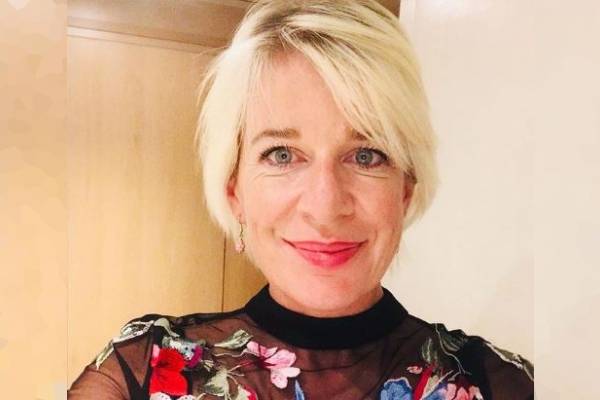 Katie Hopkins is one of the most talked-about English media personalities and political commentators who is known for her controversial opinions. Despite her debatable thoughts and actions, Katie has been supported by one man who has been by her side through it all. And that is her husband, Mark Cross.

So, who is Katie Hopkins’ husband, Mark Cross, and what does he do? Find out about the pair’s relationships and their romantic history.

Mark And Katie’s Relationship Started As An Extramarital Affair

Mark Cross has been married to Katie Hopkins since 2010, and their relationship has survived the test of time. The pair first met while the far-right political commentator was working at the Meteorological Office or Met Office.

While Hopkins was a global brand consultant at the Met Office, Cross was a design manager. Their relationship developed even though Mark was still married to his then-wife, Ruth. The two embarked on a steamy affair behind Mark’s wife of seven years.

Despite being a married man, Cross continued having an affair with Katie. Moreover, their affair came to light after the pair were pictured in an intimate position in a field in 2007. The pictures were splashed on tabloids the next day, and their relationship was the talk of the town for months to come.

However, neither Mark nor his then-girlfriend was ashamed of their relationship. Cross then divorced his then-wife and continued dating Katie. And in 2010, the pair got married in a ceremony that was part of a reality game show.

Their Wedding Was Broadcasted On A British Channel

Aforementioned, Katie Hopkins and Mark Cross tied the knot in 2010 after being together for years. Their relationship started in an unconventional way, so their marriage was one of the most talked-about events in the country. Katie and Mark got married in a ceremony which was filmed as a part of a reality show.

Katie Hopkins and Mark Cross’s wedding in 2010 was filmed as a part of Four Weddings, a popular British reality series. Their ceremony was broadcasted on the cable and satellite channel, Sky Living.

While the reality star has been in front of the camera for years, it was the first time for her partner. Nevertheless, Katie Hopkins’ husband, Mark, did not shy away from the attention. He has also talked about his second wife to the media on multiple occasions.

Aforementioned, Mark and Katie’s wedding was filmed as a part of a show and was watched by people in England. However, this was not Hopkins’s first experience as a bride as she had been married once before.

Mark Cross’s wife, Katie, was previously married to Damian McKinney. The former couple was married from September 2004 to 2007 as per Katie’s IMDb. McKinney, a Major in the Royal Marines, reportedly left his wife of around two decades to date the media personality.

Moreover, in their short-lived relationship, Katie and Damian welcomed two kids together. Katie Hopkins’ daughters with McKinney, India McKinney, and Poppy McKinney were born only a few years apart.

However, the year Poppy was born, Damian left his then-wife to be with another woman. Currently, Katie is raising her daughters with the help of her second husband, with whom she shares a son.

Is A Father Of One

Mark Cross’s wife, Katie Hopkins, gave birth to the couple’s first child while they were still dating. Their son, Maximillian William Cross, was born in 2008, two years before their televised marriage. The pair were happy to welcome a new member to the family.

Along with their son, Mark also helps raise Katie’s daughter from her previous marriage. It is unclear if Cross himself has any children from his first marriage. But there is no doubt that the Cross-Hopkins family is enjoying their lives together.

While the 2015 Celebrity Big Brother runner-up is out getting a rise out of everybody for her controversial opinions, her partner has a relatively normal job. According to a 2015 article in Mirror, Katie Hopkins’ husband, Mark, works at an animal sanctuary.

However, according to his LinkedIn, Cross left his job at The Donkey Sanctuary in 2016. He has since joined KHP Talent Management and works as a director there. He specializes in media personality management and promotion.

Furthermore, Mark previously worked as the head of design and brand for Met Office and Audit Commission. He has worked as a studio assistant, manager, and creative director at various other companies.

Therefore, Katie Hopkins’ spouse has also found much success in his profession. While his job might not be as excitable as his wife’s, Mark has managed to make a name for himself in the business world.

While the Hopkins-Cross pair have been together for decades, according to Mark, the couple disagrees on fundamental issues. In an interview, Cross admitted that he and his wife, Katie, don’t have the same views regarding politics, religion, and even their kids’ schooling.

As a result, their marriage is filled with debates and discussions about anything and everything. However, this has not affected their relationship. Rather, Mark, who is apparently known as Lovely Mark among family members, is the only person who can control the outspoken media personality.

Mark is apparently the only person Katie listens to. Cross is also among the few people who have seen the soft side of the English commentator.

Despite all the differences, Katie Hopkins and her husband are still together and are enjoying their marital life. And let’s hope their love stays the same and we get to hear more about their relationship in the coming days.