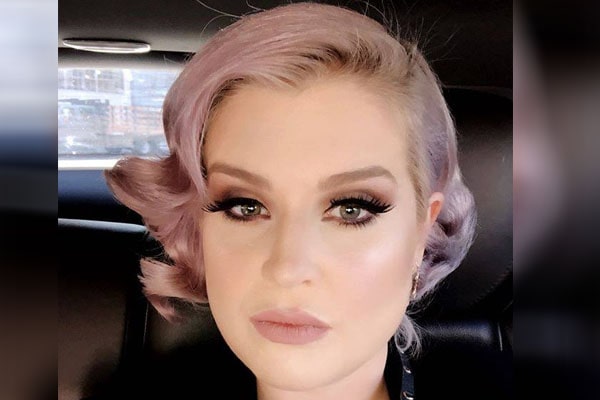 Kelly Osbourne often becomes a part of media headlines for her romantic relationships with several celebrity personalities. A few months back, she sparked dating rumors with the TikTok star Griffin Johnson. The speculations of them having a love affair started after they appeared together in public events a couple of times in 2020.

However, the media personality Kelly Osbourne, and her rumored boyfriend, Griffin Johnson, have not been spotted together in later days. Lately, Osbourne has officially moved on to someone new, with whom she feels the happiest she has ever been.

Here, let’s figure out who is Kelly Osbourne’s boyfriend at the moment. But, before that, find out about Osbourne’s dating rumors with Griffin Johnson in detail.

Aforementioned, Kelly Osbourne’s dating rumors with social media star Griffin Johnson began after they attended a couple of red carpet events together. Reportedly, they were first captured by paparazzi together at a celebrity hotspot, Craig’s, in West Hollywood in October 2020.

The prying eyes of media reporters spotted the duo, Osbourne, and Johnson, together again in Los Angeles, enjoying a night out. Some days after that incident, Griffin’s manager, Michael Gruen, responded to the gossips regarding the rumors. He disclosed to the Hollywood Fix that Johnson was trying to become a host, and for him, Osbourne is one of the best in the business. So, he fixed a date with Kelly to be his mentor.

Moreover, neither Osbourne nor Johnson has ever confirmed whether they were actually dating or not.

The British actress and television personality Kelly Osbourne’s dating rumors with Griffin Johnson sparked a few months after breaking up with model Jimmy Q. According to online sources, Osbourne dated Jimmy Q for around four months. The former pair started dating in early 2019 and appeared at few public functions together till they parted their ways away in mid-2019.

Before getting close with Q, Osbourne had an affair with The New British Magazine’s editor-in-chief, Kes Glozier, for a while in 2016. Similarly, Kelly Osbourne was also romantically linked with several other personalities, including Ricky Hall, Anton Lombardi, Quincy Combs, Danny Jones, and Rob Damiani. Also, she reportedly dated Bert McCracken, Kevin Zegers, and Matty Derman.

Besides, Kelly Osbourne got engaged twice with two different men in the past. She also had got engaged with the vegan chef Matthew Mosshart. Though she announced publicly that she and her then-fiance, Matthew wanted to be together forever just after their engagement, they decided to call it quits by 2014. But, the formerly engaged pair are still on good terms as close friends.

Furthermore, Ozzy Osbourne‘s daughter with Sharon Osbourne, Kelly Osbourne, was engaged to Luke Worrall in 2008. However, she was in no rush to be in a marital relationship at that time. Moreover, rumors of Luke cheating on Kelly with model Elle Schneider in 2010 added some bitterness to their love life. As a result, the former pair called off their engagement.

Despite multiple devasting breakups in the past, Kelly Osbourne never gave up her hope of finding her perfect and long-lasting match. Instead, her failed relationships made her wiser to choose the right fit for herself. And, it seems like she has finally met the man of her dreams.

Kelly Osbourne is currently in a committed relationship with the British cinematographer Erik Bragg. The good-looking couple Osbourne and Bragg began to go out with one another from the beginning of 2021. After numerous heartbreaks, it looks like she is happy with her love life at last.

The HollywoodLife magazine exclusively reports that the British starlet is the happiest she has ever been with her current beau. While talking to ET, Osbourne revealed that her new man, Erik Bragg helped her to get back on track with just his looks. It was Erik’s look that made her sign up for a month of therapy and get back on track.

Moreover, Kelly loves how her creative boyfriend, Erik Bragg, is with her family. He always presents himself as a gentleman whenever he meets Kelly’s parents. When Osbourne introduced her parents to Bragg for the first time, he gave her mother, Sharon, flowers.

So, Erik Bragg is officially Kelly Osbourne’s boyfriend at the moment. Though people speculated that an affair was growing between Kelly and Griffin Johnson in the past, it never happened. However, Kelly is pleased with her present romantic life, and if everything goes right, we could even see her being the bride of Erik Bragg.