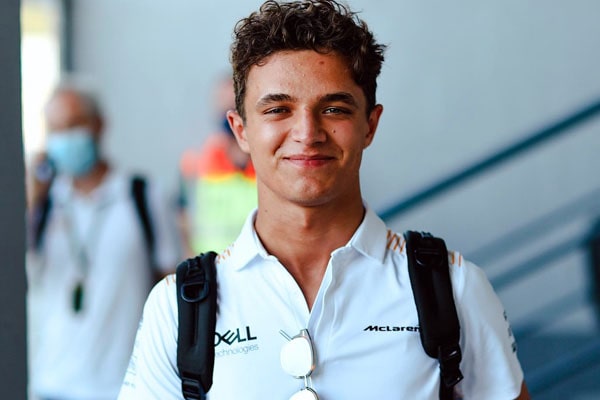 While many still think that he is single, could it be Lando Norris has a girlfriend? Image Source: Lando Norris' Facebook.

The British-Belgian Race Car Driver, Lando Norris, is famous for competing in Formula One with the British team McLaren Racing. The ending of the 2021 Hungarian Grand Prix started off the summer break in F1. So, all F1 drivers, including Lando Norris, have got some time to spend with their loved ones and recharge their batteries.

While his fellow racing driver Max Verstappen enjoys quality time with his new girlfriend, Kelly Piquet, people wonder if Lando Norris also has found his girl. So, here, we will be talking about Lando Norris’ girlfriend and how the McLaren driver’s love life is going.

Going through Lando Norris’ social media pages and the internet handles, it looks like he is single at the moment. Except for his professional achievement, he never shares anything about his dating life and other personal details on his Instagram with nearly 4 million followers.

While talking to the host on In The Pink Podcast, Lando Norris admitted that he was not fully embracing his celebrity status at that time. However, he added that he usually enjoys spending time alone and doing stuff that he loves.

Moreover, the British-Belgian driver mentioned forced socializing at dinners was his worst nightmares. Also, Norris said that being antisocial was his jam.

However, a video has been circulating on the internet where Lando can be seen dancing with a girl during his recent summer trip. What do you think, could it be that Lando Norris has finally got a girlfriend?

The above-mentioned statements give us the idea that the F1 racer is still enjoying his life as a single man. But looking at the video we hope that it won’t be long before the fans are introduced to Lando Norris’s girlfriend.

The F1 Racer Once Joked About Being Heartbroken

A few months back, Lando Norris complained about being broken-hearted and dumped during the 2020 Styrian Grand Prix. Many of his fans speculated that Lando Norris’ mystery girlfriend might have broken his heart.

But, ironically, it was not the case. During a press conference for the Hungarian Grand Prix, he opened up on what was his real problem.

The real reason Norris felt heartbroken and dumped was his sudden chest pain after getting behind the driver’s seat for a practice run. He revealed that it was just bruising from being basically out of the car for so long. But, Norris, who was feeling cheerful at the time, said that he was suffering from heartbreak.

Thankfully, Norris’ pain was just a minor scare, and his admirers got to see him putting in another great performance a couple of days later.

Norris In A Relationship With His Career

Aforementioned, the young and energetic racing driver Lando Norris does not seem to be ready for a committed relationship. So, currently, he is in a loyal relationship with his career in the motorsports industry and focusing on honing his racing skills.

Silverstone, you were amazing. Thank you ❤️ pic.twitter.com/E3NytqEzpb

Moreover, to add more experiences and skills to his resume, Lando Norris founded Team Quadrant. It is an esports team that also prioritizes content creation and apparel at the age of 20. Moreover, he is learning a lot from another F1 racing driver, Daniel Ricciardo, at the moment.

Additionally, he is also active in philanthropic works. He raised $12K for the COVID-19 Solidarity Response Fund in support of the WHO during an event on Twitch. Furthermore, he shaved his head after managing to raise such a huge sum.

So, for now, Lando Norris’ love is just his career as a race car driver and his increasing business ventures. But, looking at the video it seems like he has found his dream girl. Let’s hope the racing driver updates his fans about his relationship status soon.

The aforementioned video of Lando Norris dancing with a girl put the internet on fire for the following few days. And the racer once again made headlines by confirming he is in a relationship through Instagram.

Hearts were broken worldwide as Lando posted a cute picture with his girlfriend, Luisinha Barosa Oliveira on January 4, 2022. While the F1 racer did not name his ladylove nor tag her, he did caption the picture “My sunshine.” Fans were already suspicious about Luisinha being Lando Norris’ girlfriend as they had been seen together on multiple occasions.

Since announcing to the world about his relationship status, the McLaren driver has received support from fellow racers and fans. While few of his followers are heartbroken about the news, many are happy for the beautiful couple.

Well, we are also ecstatic about Lando finding his “sunshine” and hope that in the coming days, we will see Luisinha supporting her lover from the paddock.