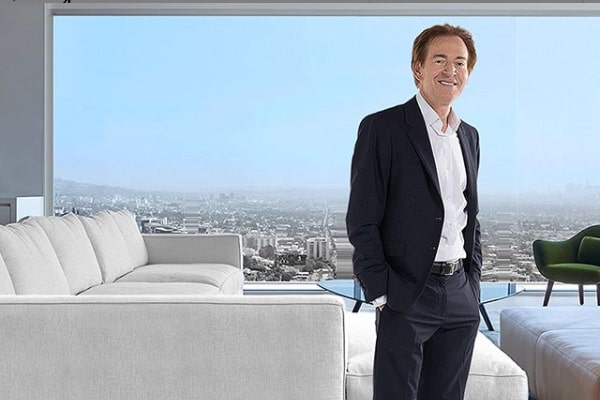 Although Lisa was lucky with her career, she was not that lucky when it came to her relationship or marriage. The gorgeous former player, Lisa, was married to Tom Kreiss and Kirk Kerkorian in 1988 and 1999, respectively. Today, we will be talking about Lisa Bonder’s ex-husband, Tom Kreiss, in this article.

Former professional tennis player Lisa Bonder’s ex-husband, Tom serves as an executive vice-president at Kreiss Enterprise, Inc. He has been actively working for the family business for a little over four decades since 1977.

The 75 years-long family business has evolved with time from vintage to modern style and so did Tom Kreiss. Growing up in an internationally acclaimed interior design family, Bonder’s ex-partner has traveled many places of the world for inventiveness. Therefore, he is doing a terrific job designing elegant and unique living spaces for more than four decades.

According to Bonder’s ex-husband, Tom’s website, his latest collection, California look are modern and has a transitional feel. He further mentioned that the focus is more organic and less formal.

Although Tom seems to be a famous personality in his field of expertise, he seems to maintain a low-key life. The social media accounts focus more on their products and less on his family matters. Which, personally looks pretty legit.

Aforementioned, Lisa Bonder’s ex-husband grew up amidst interior designs and traveled around for inspiration. Also, already stated, Kreiss’s family owns a large interior design company that has worked with gazillions of celebrities and rich people throughout its glorious history.

The furniture empire, Kreiss Enterprise, was established by Tom Kreiss’s grandfather, Murray Kreiss, in 1939 as an importer of Japanese tchotchkes.  Unfortunately, Murray died young and left the successful import business to his sons and Tom Kreiss’s father, Norman Kreiss.

Norman, along with his brother, Howard Kreiss, continued to expand the business until the tragic death of Howard in a plane crash. However, Tom Kreiss’s father held on the company and passed down to his sons.

Yes, Kreiss has two siblings, Michael Kreiss, who founded the Kreiss Design in 1976, Bob Kreiss, who designs furniture along with him. The furniture empire is changing along with the generation.

Before entering the family-business world, Lisa Bonder’s ex-husband, Tom Kreiss, was a professional tennis player. He played at the U.S Open, Wimbledon, and the French Open along with his brothers, Michael and Bob.

Although Tom left the athlete world, he made a fortune from the family business and seemed exceptionally happy plus secretive.

Was Married To Lisa Bonder In Late 80s

Both Tom Kreiss and Lisa Bonder were professional tennis players. Therefore, it wouldn’t be drastic to assume their meeting on the court. The pair shared their vows in 1988. unfortunately, the couple did not last long and divorced a few years after their marriage.

During their marital, the pair welcomed a beautiful son, Taylor Jennings Kreiss, on February 8, 1989. Although Tom, aka Thomas, and Lisa’s marriage did not last long, they nurtured their baby pretty well.

Likewise, Tom Kreiss’s ex-wife, Lisa Bonder, had changed her last name as Kreiss as well. Ironically, Kreiss was changed to Kerkorian in a few years.

As mentioned before, Lisa Bonder’s ex-husband, Tom is a very secretive person and lives away from media scrutiny. He was also expected to have a baby back in 1999. Therefore we can only assume that he has moved on from his previous marriage and is living a blissful marital life and possibly has a big happy family.

Son Taylor Jennings Kreiss Who Is All Grown Up

Although Tom Kreiss’s whereabouts need intense digging, his son with Lisa Bonder is thriving and not shy about showing off his success. The former couple’s only son, Taylor Jennings Kreiss, has all grown up to become a psychology coach, writer, and consultant. Apart from that, Lisa also has got a daughter named Kira Bonder with her ex-partner Steve Bing.

The extensive LinkedIn profile shows the hard work Taylor had put on to achieve his goals.

Let’s hope Lisa Bonder’s ex-spouse, Tom, aka Thomas, is enjoying his life and loving his job as a designer. Because come on, who doesn’t like to be creative and play with those lines?