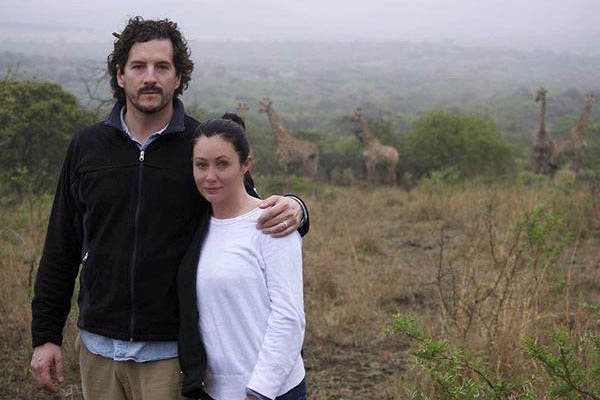 Shannen Doherty is a well-known American producer, actress, and television director. She is famous for her roles in movies and tv shows such as Girls Just Want to Have Fun, Little House on the Prairie, BH90210, Charmed, and many more. For her contribution to the film industry as an actress and producer, Doherty has won numerous awards and nominations to date. She is the winner of the 1992 and 1993 Bravo Otto for Best Female TV Star for her role in the teen drama Beverly Hills, 90210. Also, Doherty won the 2012 Webby Award in the Best Individual Performance category, which she shared with Wilson Cleveland.

Charmed starter Shannen Doherty is happily married to the celebrity photographer Kurt Iswarienko since 2011. It has crossed nearly a decade since the couple tied their marital knot, and their bonding is getting stronger with time.

Here, have a look at the love life of Kurt Iswarienko and Shannen Doherty. Also, please get to know some more about Doherty’s repetitive illness and how her husband, Kurt supported her throughout all these years.

The celebrity filmmaker and performer Shannen Doherty exchanged the wedding vows with her long-time boyfriend, Kurt Iswarienko, on 15 October 2011 at sunset in Malibu, California. A total of 170 guests, including their family members and close friends, were present at their marriage ceremony. Their reception happened at a private estate nestled in the hills.

Reportedly, Shannen Doherty’s then-boyfriend, Kurt Iswarienko, proposed to her with an engagement ring in July 2011. They dated for almost two years before deciding to walk down the aisle together. According to sources, the current husband-wife duo, Doherty and Iswarienko, met in 2008, and their relationship first began as friends.

It has been almost thirteen years since Shannen Doherty and Kurt Iswarienko are together. Many obstacles came in their marital life, but they faced all of them together and always supported one another. We hope their togetherness and love for each other last long.

Shannen Doherty’s Illness Changed Her Relationship With Her Husband

The people who are keeping track of actress Shannen Doherty’s life might know well that she has been going through a couple of health problems since 1999. In 1999, Doherty’s doctors confirmed that she had Crohn’s disease. Later, in 2015, Shannen was diagnosed with breast cancer. By the time doctors discovered Doherty’s cancer, it had already spread to her lymph nodes. She underwent several treatments, including several mastectomies that changed her body and brought changes in her self-esteem. Doherty told the media that she went into remission in 2018.

During such hard times, Shannen Doherty’s husband, Kurt Iswarienko, was always there to increase her self-esteem. Her body transformations did not affect him. Rather, he helped Doherty accept her post-cancer body, which was difficult for her. Kurt stood by his wife’s side through her sickness and made her feel more loved.

While talking to the media, Shannen said that how her husband saw her really helped her be a better person. She added her husband motivated her by praising how she handled her illness with so much grace and appreciated her strength. Shannen Doherty’s husband, Kurt Iswarienko, even said to her that he found her far sexier and appealing than he had before.

Unfortunately, Shannen Doherty’s cancer returned at the starting of 2020, leaving all of her fans in shock. Doherty announced that she is now on stage 4, and whatever happens, she will keep fighting.

Overall, Shannen’s cancer solidified her marital bond with Kurt Iswarienko. The beautiful couple became closer than ever, and their relationship is stronger now than it was at the starting of their romance.

Both Kurt Iswarienko and Shannen Doherty were in a romantic relationship before finding each other. Prior to meeting Kurt, Shannen had already experienced three heartbreaks. First, she was engaged to Dean Jay Factor, the Max Factor heir. But they ended their engagement shortly after some months in 1993. Then, Doherty married comedian Ashley Hamilton in 1993, which lasted for just a year till 1994. Her last marriage was with Rick Salomon from 2002 to 2003. All of them have moved on with their lives and Ashley even has a daughter named Willow Rae Hamilton.

My man and me pic.twitter.com/RumgOuwx

As for Kurt Iswarienko, he was previously in a marital relationship with Taryn Band. Reportedly, he was still married to Band when he met his future wife, Shannen Doherty. Taryn and Taryn’s mom, Debra Band, even accused Shannen of breaking their marriage. But, there is no point in being stuck on the rumor as Kurt Iswarienko, and Shannen Doherty are married now and happy with their relationship.

Currently, Shannen and Kurt live a blissful life at their home in Malibu. Though the pair does not have any kids together, they own a couple of dogs.